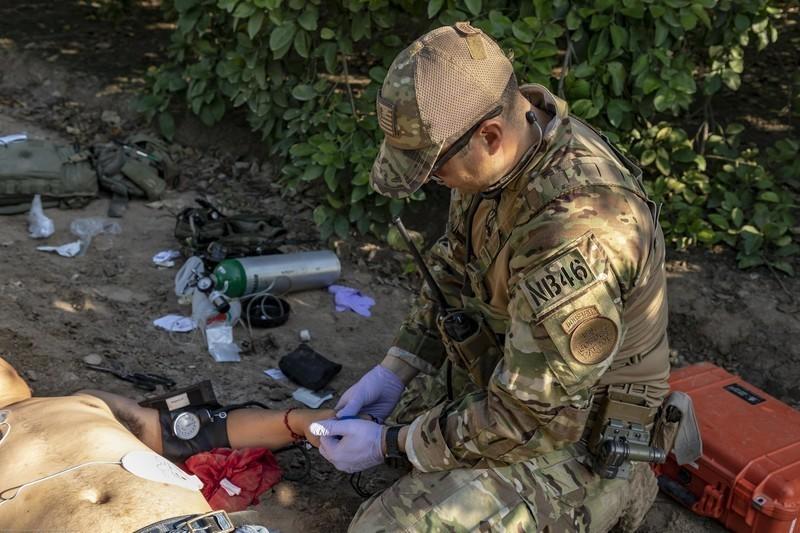 This bill — the U.S. Border Patrol Medical Screening Standards Act — would require standardized processes and training to ensure consistent medical screenings for individuals apprehended at the U.S.-Mexico border within 12 hours of their initial stop. These medical screenings would cover medical history, current medical complaints, current medications, and more. This bill would also provide law enforcement and the Dept. of Homeland Security (DHS) staff with requested training to improve the quality of care given to migrants and equip officers with additional resources to address medical situations.

Inadequate medical screening procedures at the southern border have contributed to migrants’ deaths, including those of children. Screening migrants within a reasonable timeframe after their initial apprehension would help ensure that those with medical needs are properly attended to.

DHS & CBP already requested additional funding to expand medical screening for migrants in its care and Congress has already appropriated additional money for this purpose in an emergency funding package from June 30, 2019.

“The conditions I witnessed at the border were deeply troubling, and as a nurse, I felt the medical conditions were especially unacceptable; so when I came back to Congress I got right to work and introduced this legislation to help ensure children and vulnerable families who arrive at the border receive appropriate medical screenings and care. When any human being enters into U.S. custody, it is both U.S. policy and our moral duty require that we provide safe and sanitary conditions, especially to children and the most vulnerable populations. It is essential that we keep our country secure in a manner that reflects American values.”

In a May 2019 House committee hearing when DHS Secretary Kevin McAleenan (who replaced former secretary Kirstjen Nielsen) was testifying to defend his department’s budget request, Rep. Underwood asked McAleenan about his department’s treatment of migrant children. Pointing to photos of migrants sleeping on the ground outside Border Patrol facilities despite increased funding from Congress to provide humanitarian assistance at the southern border, Rep. Underwood said, “I feel like, and the evidence is really clear, that this is intentional. It’s a policy choice, and it’s inhumane,” which McAleenan called an “appalling accusation.”

Rep. Underwood’s comments angered Rep. Mike Rogers (R-AL), Ranking Member on the House Homeland Security Committee, who said she’d essentially accused McAleenan and his department of committing murder. Rep. Rogers requested that her comments be “taken down,” marking it as a questionable comment and opening the possibility of punishment against the member who made the comment. When members of the committee voted 9-5 to approve Rogers’ request, they made Rep. Underwood potentially subject to a variety of punishments. Ultimately, Rep. Underwood’s statement was stricken from the official hearing record and she was barred from talking for the rest of the session.

However, other Democrats piled on to Rep. Underwood’s comments after a committee recess: Rep. Nanette Barragán (D-CA) agreed that migrant deaths were “intentional,” based on the Trump administration’s actions to halt or limit Central American migrants’ asylum claims in the U.S. and its “zero tolerance” policy that led to over 2,800 migrant families’ separation in the summer of 2018.

This bill unanimously passed the House Committee on Homeland Security on July 17, 2019 with the support of 21 Democratic cosponsors.

Of Note: The current DHS Secretary, Kevin McAleenan, who previously served as commissioner of Customs and Border Protection (CBP), ordered increased medical screenings of children after the first Guatemalan child died at the border in December 2018. Now, all children in DHS custody receive medical checks and expanded medical screenings. In a January 28, 2019 memo, CBP detailed its interim enhanced medical efforts, which are intended to enhance the agency’s protection of individuals in its custody, particularly juveniles (under the age of 18).

Additionally, the Coast Guard and U.S. Public Health Service have sent medical personnel to the border to help screen migrants.

In January 2019, DHS requested $800 million for humanitarian assistance along the border from Congress, as well as an extra $1.1 billion for this purpose in the agency’s 2020 budget.

Apprehensions at the Southern border of unauthorized immigrants and asylum-seekers have spiked in the last year, with May 2019 marking the highest monthly total since 2006 at 132,880 apprehensions. Of those detained, the proportion of family units and unaccompanied minors are at all-time highs, burdening a detention system designed for single males who historically made up the vast majority of those apprehended at the Southern border. After it became apparent that DHS accounts funding detention facilities would run out of money before the end of the fiscal year, Congress passed a bipartisan $4.59 billion emergency funding package to provide for additional facilities to prevent overcrowding, provide basic necessities and healthcare to detained migrants, and speed up the processing of immigration cases. President Trump signed it into law on June 30th.