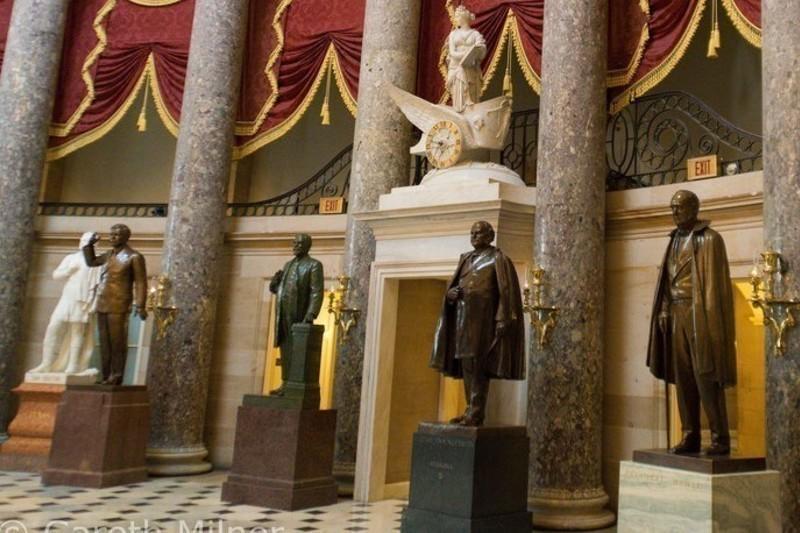 Should Confederate Statues be Removed From Statuary Hall in the U.S. Capitol? (H.R. 3701)

This bill — known as the Confederate Monument Removal Act – would prohibit statues of people who served voluntarily with the Confederate States of America from being displayed in National Statuary Hall in the U.S. Capitol. The Architect of the Capitol would be responsible for identifying all offending statues in National Statuary Hall. Following the approval of the Joint Committee on the Library of Congress, the Architect would be responsible for arranging for these statutes’ removal from the Capitol within 120 days.

States may replace these statues in accordance with the requirements and procedures of the Revised Statutes and the Legislative Branch Appropriations Act, 2001. They may also reclaim Confederate statues that are currently part of the National Statuary Hall Collection if they pay a shipping fee. Statues that are not reclaimed by states would be turned over to the Smithsonian.

Confederate statues in the U.S. Capitol serve as monuments to a shameful part of our nation’s past that is painful to many citizens. These statues should be removed from the Capitol and replaced with statues of people with less complicated legacies.

States have a right to place any two statues of their choosing in the U.S. Capitol building. Southern states should be allowed to place statues of these important contributors to their histories in the Capitol.

Southern states; Confederate statues; U.S. Capitol building; National Statuary Hall; Architect of the Capitol; and the Joint Committee on the Library of Congress.

A CBO cost estimate for this bill is unavailable. However, the bill text allocates $2 million to the Architect of the Capitol and the $3 million to the Smithsonian for the removal and care of Confederate statues that would have to be removed from National Statuary Hall under this legislation, for a total of $5 million.

“Across the country, Confederate statues and monuments pay tribute to white supremacy and slavery in public spaces. These hateful symbols should have no place in our society and they certainly should not be enshrined in the U.S. Capitol. Though we’ve made tremendous progress as a nation in our quest for social, racial and economic justice, we cannot ignore or forget that Confederates fought fervently to preserve the institution of slavery and keep African Americans in chains. It’s past time for Congress to reject these symbols of racism and demand that our public monuments respect and uplift human dignity.”

This legislation is supported by CREDO Action, a progressive social change organization. The L.A. Times Editorial Board, writing in support of this legislation, argues:

“That visitors from other countries, and children from our own, can find in such an exalted place [as the U.S. Capitol] monuments to the president, vice president and commanding general of the would-be Confederate States of America is more than simply embarrassing. It's a subtle but significant repudiation of what America stands for… People who actively sought to disunite the United States shouldn't be feted with a statue in the very chambers of the government they rebelled against… These are battles over symbols, but symbols matter. When statues and memorials represent, to many, the exaltation of racism and slavery, they have no place in our public spaces.”

House Speaker Paul Ryan (R-WI) has indicated that congressional Republicans will not intervene to remove Confederate statues without the consent of affected states. Rep. Ryan’s spokesman, Doug Andres, commenting for the Speaker, calls individual states’ decisions to select Confederate icons for their statues “decisions for those states to make.”

President Donald Trump, who opposes the removal of Confederate statues, argues that removing them is an attempt to change history and culture:

There are 48 cosponsors of this bill, all of whom are Democrats.

Lawmakers have previously attempted to remove Confederate iconography from the Capitol. In 2015, lawmakers spoke out about Confederate symbols’ roles in celebrating white supremacy after a white supremacist, Dylann Roof, killed nine African-Americans at a prayer meeting in a Charleston, South Carolina church.

At that time, then-Senate Minority Leader Harry Reid (D-NV) told the New York Times that the removal of Confederate statues was something that Congress “should consider,” and that “should be done in a deliberate fashion.”

The week after the Charleston shooting, Rep. Bennie Thompson (D-MS) brought a measure to the floor calling for the removal of state flags featuring the Confederacy’s “Southern Cross” from areas displaying flags in the Capitol. That measure was defeated in a vote almost completely along party lines.

There are currently 12 Confederate leaders, including Gen. Robert E. Lee and President Jefferson Davis, in the National Statuary Hall Collection. The statues in the Capitol represent some of the most prominent members of the Confederacy, including: Jefferson Davis, the President of the Confederacy; Col. James Zachariah George, who took part in the Mississippi Secession Convention; Alexander Hamilton Stephens, who served as the Vice President of the Confederacy and gave a speech in that capacity in which he claimed that the Confederacy was found “upon the great truth that the negro is not equal to the white man; that slavery subordination to the superior race is his natural and normal condition;” Robert E. Lee, one of the most famous Confederate commanders; and Zebulon Vance, who served as a Confederate officer before becoming governor and then U.S. Senator for North Carolina.

Activists around the country have been protesting Confederate memorials by attempting to advance measures that’d remove them and in some cases tearing them down. In the aftermath of the Charlottesville attack in which a white supremacist drove his car into a crowd, killing a counter-protester at a rally organized by those who wanted to preserve these statues, House Minority Leader Nancy Pelosi (D-CA) and other Democrats called for the statues’ immediate removal from the Capitol.