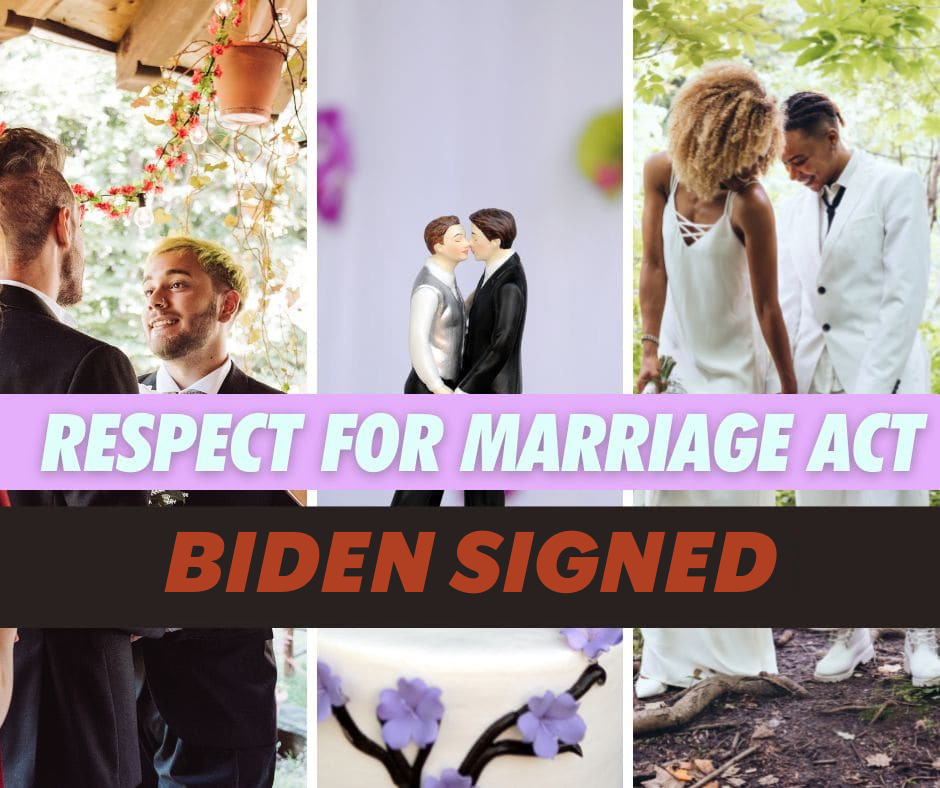 How do you feel about the Respect for Marriage Act?

"For most of our nation’s history, we denied interracial couples and same sex couples from these protections. It failed to treat them with equal dignity and respect. And now, this law requires an interracial marriage and same-sex marriage must be recognized as legal in every state in the nation...The road to this moment has been long, but those who believe in equality and justice – you never gave up."

“For millions and millions of Americans, today is a very good day. An important day. A day that’s been a long time coming.”

“While I believe in traditional marriage, Obergefell [the SCOTUS decision that legalized gay marriage] is and has been the law of the land upon which LGBTQ individuals have relied. This legislation provides certainty to many LGBTQ Americans, and it signals that Congress – and I – esteem and love all of our fellow Americans equally.”

My chief objection to the legislation passed today in the Senate requiring recognition of same-sex marriage is the lackluster provisions in the bill protecting religious liberties.

They are woefully inadequate to the task.

This bill — the Respect for Marriage Act — would repeal the federal Defense of Marriage Act and establish through a statute that a marriage is legitimate under federal law if it was valid in the state where it was performed.

Additionally, the bill would prohibit any person acting under the color of state law from denying full faith and credit to an out-of-state marriage based on the sex, race, ethnicity, or national origin of the individuals in the marriage; provide the attorney general with the authority to pursue enforcement actions; and create a private right of action for any individual harmed by a violation of this provision.

The federal right to gay marriage as established in Windsor and Obergefell is under threat because of the Supreme Court’s recent reversal of abortion precedents in Dobbs and the willingness of at least one justice to revisit decisions like those upholding gay marriage. This bill would codify same-sex marriage rights in federal law.

The Supreme Court’s majority opinion in Dobbs explicitly rejected the notion that the ruling applies to other non-abortion precedents, such as the right to gay marriage, and there isn’t any broad push to reverse that right. This bill is a solution in search of a problem, and nothing more than an election year messaging bill designed to boost Democrats’ electoral prospects.

“Three weeks ago, a conservative majority on the Supreme Court not only repealed Roe v Wade and walked back 50 years of precedent, it signaled that other rights, like the right to same-sex marriage, are next on the chopping block. As this Court may take aim at other fundamental rights, we cannot sit idly by as the hard-earned gains of the Equality movement are systematically eroded. If Justice Thomas’s concurrence teaches anything it’s that we cannot let your guard down or the rights and freedoms that we have come to cherish will vanish into a cloud of radical ideology and dubious legal reasoning. Today, we take an important step towards protecting the many families and children who rely on the rights and privileges underpinned by the constitutional guarantee of marriage equality. The Respect for Marriage Act will further add stability and certainty for these children and families.”

“In overturning Roe v. Wade, the conservative Supreme Court majority indicated it is willing to attack other constitutional rights, including same-sex and interracial marriage. In fact, one justice specifically noted that the court’s Obergefell decision confirming same-sex marriage should be revisited. Our bill would repeal the discriminatory Defense of Marriage Act and ensure that marriage equality remains the law of the land.”

“Maine voters legalized same-sex marriages in our state nearly a decade ago, and since Obergefell, all Americans have had the right to marry the person whom they love. During my time in the Senate, I have been proud to support legislation prohibiting discrimination based on sexual orientation and gender identity, from strengthening hate crime prevention laws, to repealing ‘Don’t Ask, Don’t Tell,’ to ensuring workplace equality. This bill is another step to promote equality, prevent discrimination, and protect the rights of all Americans.”

The Supreme Court’s majority opinion in Dobbs explicitly rejected the argument that its ruling overturning abortion rights under Roe and Casey casts doubt on other precedents, including Obergefell which held there is a constitutional right to same-sex marriages. Justice Samuel Alito’s majority opinion countered those suggestions:

“Finally, the dissent suggests that our decision calls into question Griswold, Eisenstadt, Lawrence, and Obergefell. But we have stated unequivocally that “[n]othing in this opinion should be understood to cast doubt on precedents that do not concern abortion.” We have also explained why that is so: rights regarding contraception and same-sex relationships are inherently different from the right to abortion because the latter (as we have stressed) uniquely involves what Roe and Casey termed “potential life.” Therefore, a right to abortion cannot be justified by a purported analogy to the rights recognized in those other cases or by “appeals to a broader right to autonomy.” It is hard to see how we could be clearer. Moreover, even putting aside that these cases are distinguishable, there is a further point that the dissent ignores: Each precedent is subject to its own stare decisis analysis, and the factors that our doctrine instructs us to consider like reliance and workability are different for these cases than for our abortion jurisprudence.”

Justice Clarence Thomas wrote a concurring opinion that wasn’t joined by any other justices which took issue with the Court’s jurisprudence in substantive due process precedents like Obergefell. Notably, the Supreme Court requires four justices to vote to grant certiorari and hear a case, so the lack of other justices joining his concurrence indicates other justices may not share his view. Justice Thomas’s concurrence explained that while Dobbs didn’t address his issues with the broader substantive due process doctrine, he believes those rulings were improperly decided so they should be overturned and the constitutionality of the underlying rights they established should be reexamined based on other grounds:

“The Court today declines to disturb substantive due process jurisprudence generally or the doctrine’s application in other, specific contexts. Cases like Griswold v. Connecticut; Lawrence v. Texas; and Obergefell v. Hodges,  are not at issue. The Court’s abortion cases are unique, and no party has asked us to decide “whether our entire Fourteenth Amendment jurisprudence must be preserved or revised”. Thus, I agree that “[n]othing in [the Court’s] opinion should be understood to cast doubt on precedents that do not concern abortion.”

For that reason, in future cases, we should reconsider all of this Court’s substantive due process precedents, including Griswold, Lawrence, and Obergefell. Because any substantive due process decision is “demonstrably erroneous,” we have a duty to “correct the error” established in those precedents. After overruling these demonstrably erroneous decisions, the question would remain whether other constitutional provisions guarantee the myriad rights that our substantive due process cases have generated. For example, we could consider whether any of the rights announced in this Court’s substantive due process cases are “privileges or immunities of citizens of the United States” protected by the Fourteenth Amendment. To answer that question, we would need to decide important antecedent questions, including whether the Privileges or Immunities Clause protects any rights that are not enumerated in the Constitution and, if so, how to identify those rights. That said, even if the Clause does protect unenumerated rights, the Court conclusively demonstrates that abortion is not one of them under any plausible interpretive approach.”

House Rules Committee Ranking Member Tom Cole (R-OK) criticized Democrats for bringing this bill directly to the floor without holding a hearing in a committee with jurisdiction, thereby circumventing the process of regular order. He explained:

“We will also be considering an additional bill, which the Majority is calling the Respect for Marriage Act, on very short notice. Indeed, up until noon we did not know we were going to be considering this bill, let alone what the text entailed. The Majority is once again failing to even pretend to adhere to regular order. That is deeply concerning. Instead of working through the committees of jurisdiction, the Majority instead drafted this bill behind closed doors in the Speaker’s office and sent it straight to the Rules Committee after giving members just one hour to review it. To say this process stinks is an understatement: indeed, this is no process at all. But given how the current Majority has treated the House this Congress, between fundamentally changing the way the House operates through proxy voting, to completely locking down alternative ideas, to writing bills in the Speaker’s office instead of in committee, I should not be surprised.”