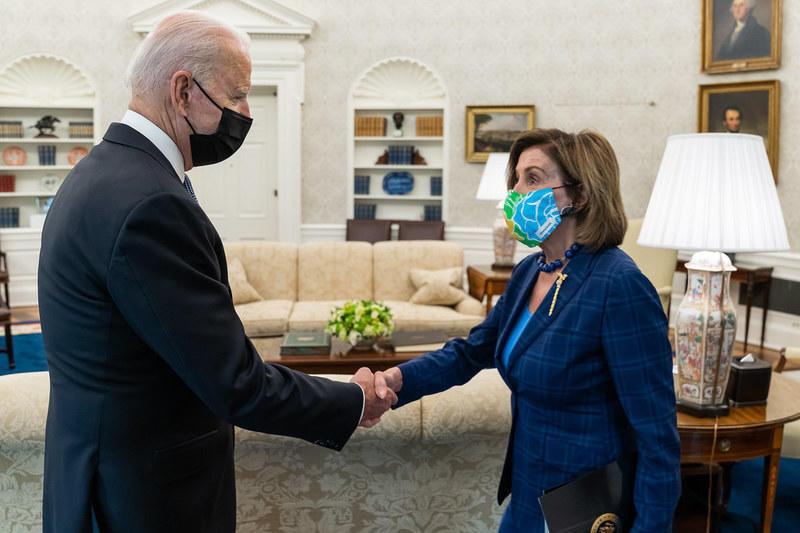 This bill — known as the Build Back Better Act — would enact a more than $1.635 trillion social spending plan, containing tax reforms to provide relief to taxpayers in high-tax states or who have dependent children; create entitlement programs, including a federal paid leave and childcare; expand preschool programs; subsidize the deployment of green energy technologies; and provide temporary parole protection for certain unauthorized immigrants. The bill is estimated to increase budget deficits by more than $357 billion over the fiscal year 2022-2031 period. A breakdown of its various major provisions can be found below.

This section would make a number of changes to the tax code, including raising certain tax rates, altering some deductions,  and changing several tax credits. A breakdown of the major provisions can be found below.

State and Local Tax Deduction (SALT): This bill would raise the cap on the state and local tax deduction from $10,000 to $72,500 for individual filers (or $36,250 for estates, trusts, or married spouses filing separately). The increased SALT deduction limit would apply to tax years starting after 2020 and be in effect through 2031. It’s projected to cost the federal government roughly $230 billion from fiscal year 2022 through 2026 due to foregone tax revenue relative to current tax policy. (The SALT deduction allows taxpayers to deduct sales, income, and property taxes paid to their state and local governments up to the limit.)

Child Tax Credit (CTC): This bill would extend for one year the increased child tax credit as enacted in the American Rescue Plan, and continue advance payments through 2022. For 2022, the CTC would be $3,000 (or $3,600 for children under age 6), and for most taxpayers the credit would be advanceable. The Social Security Number requirement for qualifying children, which was added by the Tax Cuts and Jobs Act, would be eliminated, thus allowing the CTC to be claimed for children who aren’t American citizens.

Under this bill, the CTC would begin to phase out households with income above $150,000 for joint filers, $112,500 for heads of household, and $75,000 for all other filers. A “look-back rule” for the phaseout threshold would allow taxpayers to use prior-year income for purposes of determining the phaseout of the credit.

After 2022, the CTC would be reinstated as fully refundable, and would no longer be subject to either the $1,400 limit on refundability nor the earned income phase-in.

These changes to the child tax credit would cost an estimated $167 billion over the FY2022-2026 period.

Earned Income Tax Credit (EITC): This section would permanently extend the earned income tax credit for taxpayers with no qualifying children (the “childless EITC”) as enacted in the American Rescue Plan. The minimum age to claim the childless EITC would be reduced from 25 to 19 (except for certain full-time students) and the upper age limit would be eliminated. The childless EITC amount would also be increased due to an increased credit percentage and phaseout percentage from 7.65% to 15.3%; increasing the maximum credit amount to $9,820; and increasing the income threshold at which phaseout begins to $11,610 for non-join filers. Those provisions would increase the maximum credit amount from $543 to $1,502 in 2021. These changes would cost an estimated $13 billion over the FY2022-2026 period.

Nicotine Tax: A new excise tax would be imposed on nicotine that has been extracted, concentrated, or synthesized. The amount of tax would be the greater of the dollar amount specified for small cigarettes or $50.33 per 1,810 milligrams of nicotine.

Payroll Credit for Local News Journalists: This section would allow an employment tax credit for each calendar quarter wages, not to exceed $12,500, paid to local news journalists by an eligible news organization or qualifying broadcasting station. The credit for each calendar quarter couldn’t exceed the total amount of employment taxes paid by respect to all employees. Any excess would be treated as overpayment and allowed as a refund.

Tax Enforcement: This bill would provide $21 billion to the Internal Revenue Service (IRS) to increase its tax enforcement efforts over the FY2022-2031 period, which are projected by the CBO to bring in $207 billion in revenue over the same period.

Tax Increases on High-Income Individuals: The net investment income tax would be expanded to cover net investment income derived in the ordinary course of a trade or business for taxpayers with greater than $400,000 in taxable income for individuals or $500,000 for joint filers, as well as for trusts and estates. This tax wouldn’t be assessed on wages on which FICA is already imposed, and would apply beginning after December 31, 2021.

This section would also prohibit taxpayers from making further contributions to IRAs if it would cause the total value of an individual’s IRA and defined contribution retirement accounts to exceed $10 million.

This section contains a number of provisions aimed at increasing the deployment and use of green energy technologies through tax provisions. In total, the section would cost a total of $114 billion over the FY2022-2026 period. A breakdown of its various provisions can be found below.

Green Energy Tax Credits & Incentives: This bill would create, expand, or modify a number of clean energy-related tax credits and incentives, including:

Electric Vehicle Tax Credits: This bill would establish, increase, or modify a number of tax credits for electric vehicles, including:

This section would create a number of new federal entitlements, including universal pre-kindergarten, paid leave and childcare. A breakdown of those programs can be found below.

Paid Leave: This section would entitle full-time and part-time workers, including gig workers and other self-employed workers, in both the private and public sectors to receive a federal comprehensive paid leave benefit based on their past earnings if they satisfy several criteria after filing an application, including that they:

Workers would be covered without regard to tenure on their current job, so long as they meet eligibility criteria. Coverage would be provided either through a federal benefit, a qualifying “legacy state” or a comprehensive employer-sponsored plan for which the state or employer is reimbursed by the federal government.

If workers receive wages, self-employment income, or other compensation (including paid sick leave, paid vacation, or other paid time off) while performing caregiving, such time generally doesn’t constitute qualified caregiving under this section. However, an employee may receive compensation from their employer to supplement or “top up” their weekly federal benefit amount, so long as the employer compensation plus the federal paid leave benefit combined don’t exceed the worker’s regular rate of pay. Additionally:

This section would provide unauthorized immigrants who entered the U.S. before January 1, 2011, have continuously resided in the U.S. since then, and aren’t inadmissible under the Immigration and Nationality Act an opportunity to request and receive a grant of parole if they take several steps successfully, including:

If approved, parole would be granted by the Dept. of Homeland Security to provide employment and travel authorization to paroled individuals, and to make them eligible for a REAL ID compliant driver’s license or state identification card. Parole would be granted for 5 years and could be extended until September 30, 2031, if the individual continues to qualify for parole based on the policies and implementing guidance that were in effect when the individual was initially granted parole. The Secretary of Homeland Security would be prohibited from revoking parole unless they determine an individual to be ineligible for parole. Individuals granted parole under this section wouldn’t be counted for the purpose of calculating the annual worldwide level of family-sponsored immigrants.

Unused employment visas from fiscal years 1992 through 2021 would be recaptured. Certain individuals selected to apply for diversity visas in fiscal years 2017 through 2021 but were refused or denied admission because of certain executive orders or COVID-19 restrictions would be permitted to reapply.

This section would make several changes to federal financial aid programs, including Pell Grants, in addition to providing funding for certain classifications of colleges and universities, including:

An additional $3 billion would be provided for a competitive grant program to improve the research capacity and research and development infrastructure at four-year HBCUs, TCUs, and MSIs; the program would consist of planning grants for a period of one to two years and implementation grants for a period of one to five years. Institutions would receive priority when applying for an implementation grant if they previously received a planning grant.

Democrats need to enact an ambitious social spending plan, and the Build Back Better Act would be transformative for the American economy by providing relief tax relief to families and taxpayers in high-tax states; spurring green energy technologies; establishing universal pre-school programs for three- and four-year-olds along with subsidized childcare; and granting parole to certain unauthorized immigrants who were brought here through no fault of their own.

Democrats’ social spending plan is an irresponsible handout to their cronies that will only exacerbate the inflation that’s hitting Americans’ household budgets hard and adding $367 billion to the national debt over the next decades. One of the largest provisions in this bill is a tax cut for wealthy taxpayers in high-tax states, and it further attempts to pick winners and losers by handing out subsidies to green energy companies, union-only electric vehicle manufacturers, and tax credits for local journalists.

In-Depth: House Speaker Nancy Pelosi (D-CA) offered a statement in a "dear colleague" letter regarding the House’s upcoming vote on the Build Back Better Act which read in part:

“Build Back Better is a spectacular agenda for the future, with transformational action on healthcare, family care and climate that will make a significant difference in the lives of millions of Americans, and it is possible because of the leadership of the President.”

“The Build Back Better Act makes historic investments over 10 years to overhaul and reimagine entire sectors of our economy and society so that everyone – not just those at the top – will benefit from a growing economy. This bill delivers the most transformative investment in children and caregiving in generations; the largest effort to combat climate change in American history; the biggest expansion of affordable health coverage in a decade; the most significant effort to bring down costs and strengthen the middle class in generations; investments and key reforms to make our tax system more equitable – and more.”

House Minority Leader Kevin McCarthy (R-CA) blasted Democrats’ spending plan in a press conference ahead of the House vote, saying it will cost them in the next election:

“I don’t think their constituents are going to appreciate them helping to pass a bill that: Empowers the IRS to try to squeeze every single dollar from American families and small businesses; its second-biggest program gives away billions to the rich; delivers a tax cut to two thirds of the country’s millionaires.”

“This analysis from the Congressional Budget Office is a clear indictment of the Democrats’ tax and spending agenda and the false promises that have gone along with it. CBO has confirmed that this bill is not fully paid for, despite promises from President Biden and Congressional Democrats that it would be. As a matter of fact, CBO shows the bill will add $800 billion to the debt in just the next five years. And despite all the talk from Democrats about making the wealthy pay their fair share, CBO’s analysis shows that one of the single largest investments made in their bill is one which provides a massive tax break for the wealthiest one percent in America. Democrats are rewarding their wealthy friends while sending the bill to the working families who are already paying more to put food on their tables, gas in their cars, and clothes on their backs.”

Of Note: If this version of the bill passes the House, it is likely to be amended by the Senate before the upper chamber approves it, which will require the House to vote on the revised measure at a later date. Senate Democrats have indicated an intent to revise some provisions of it, so it’s likely that some portions of the bill will be removed entirely or modified before the Senate can pass it.