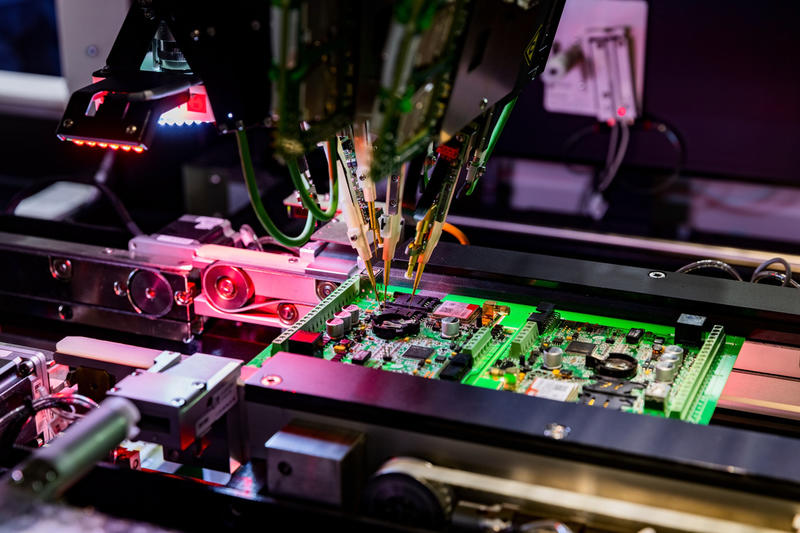 This bill — known as the America COMPETES Act of 2022 — would aim to bolster U.S. economic and technological competitiveness through investments in manufacturing, research, and innovation. It would aim to accelerate U.S. production of semiconductors, strengthen supply chains, and expand research capacity while supporting labor standards and human rights. It would also enact a number of other provisions, such as extending a healthcare coverage tax credit and fostering research related to coral reefs. A breakdown of its various provisions can be found below.

Creating Helpful Incentives to Produce Semiconductors (CHIPS) for America: This section would establish the CHIPS for America Fund and provide it with $50.2 billion in appropriations for fiscal years 2022 through 2026. It would advance research and innovation in semiconductors through partnerships with industry, federal scientific agencies, National Labs, and academia. It would also:

Research & Innovation: This section would authorize, reform, and expand research activities at federal scientific and technological agencies. Specifically, it would:

Supply Chains: This section would establish a new office in the Dept. of Commerce to lead a government-wide effort to strengthen supply chains that are critical to the nation’s economic vitality and national security. It would be specifically tasked with:

Additionally, this section would authorize $45 billion for grants, loans, and loan guarantees to support supply chain resilience and manufacturing of critical goods, industrial equipment, and manufacturing technology. This would include:

Additionally, the new office at the Dept. of Commerce would have a program to map and monitor supply chains, identify supply chain gaps and vulnerabilities, and identify opportunities to address supply chain risk. This bill would authorize $500 million for supply chain mapping and monitoring to designate critical industries, supply chains, and critical goods that have a significant effect on U.S. national security or economic security.

This section of the bill would also provide:

Foreign Policy: This section would undertake a number of initiatives to promote U.S. geopolitical competitiveness, including:

This bill would include a statement of policy reiterating the U.S. commitment to Taiwan and recognize Taiwan as a vital part of the U.S. approach to the Indo-Pacific, and a statement of policy of U.S. interests in maintaining the peace and stability through deterrence of military acts or other forms of coercive behavior in the Indo-Pacific. It would also add that United Nations recognition of the People’s Republic of China didn’t address the issue of Taiwan representation at the UN or related organizations, nor did it take a position on the relationship between the PRC and Taiwan or Taiwan’s sovereignty, and that the U.S. opposes any initiative that seeks to change Taiwan’s status without the consent of the people.

This section of the bill would include a statement of policy to increase funding and diplomatic personnel dedicated to the Indo-Pacific region, with $2 billion authorized under the Foreign Assistance Act and $1.25 billion for diplomatic engagement.

Further, this section would:

The State Dept. and other federal agencies would be required to submit strategies to counter China’s attempts to gain influence in the Caribbean, Europe, South and Central Asia, Africa, the Middle East and North Africa, the Arctic, Oceania, and the Pacific islands.

Congress would put forward findings on the PRC’s abrogations of its obligations and commitments under international law and agreements and the erosion of Hong Kong’s autonomy, undermining the democratic norms and human rights, and the use of violence and excessive force after the imposition of the national security law. The bill would authorize $10 million for the State Dept.’s Bureau of Democracy, Human Rights, and Labor to promote democracy in Hong Kong. Qualifying Hong Kong residents would be provided with temporary protected status and refugee status for the 18-month period beginning after enactment. It would stipulate that Hong Kong will continue to be considered a foreign state separate and apart from the PRC for purposes of the numerical limitations on immigrant visas.

This bill would designate non-citizens who were Chinese nationals and Xinjiang residents; aliens who fled Xinjiang after June 30, 2009, and reside in other Chinese provinces or a third country where they are not firmly resettled; and the spouses, children, and parents as Priority 2 refugees of special humanitarian concern. Additionally, this section would:

This bill would help ensure U.S. innovation and global leadership in emerging technologies while taking steps to relocate supply chains and manufacturing out of countries that pose a threat to America’s economic and national security.

Rather than taking a page out of the Senate’s book and working in a bipartisan manner on this bill, House Democrats’ legislation is a missed opportunity that does nothing to counter China’s military ambitions and malign influence around the world.

“To ensure U.S. innovation and global leadership in emerging technology, we must develop and foster programs within the federal government to attract top cyber talent. At the same time, we must protect the privacy and civil liberties of Americans as we explore new technological frontiers.  The Oversight Committee’s provisions in the America COMPETES Act of 2022 will help our nation meet those challenges.”

“The America COMPETES Act helps put us on course to lead the pack in creating the strongest and most advanced economy of the future. This legislation strengthens our nation’s supply chains so more critical goods are manufactured here in the United States instead of China.  It also bolsters our Strategic National Stockpile and invests in the next generation of cutting-edge technology.  This comprehensive legislation brings together many bills that have garnered strong bipartisan support in the past, and I’m hopeful it will pass with that same bipartisan spirit.”

The White House released a statement of administration policy in support of the bill which emphasized the impact on supply chains, innovation, and domestic manufacturing but made no mention of competition with China:

“The Administration supports House passage of H.R. 4521, the America Creating Opportunities for Manufacturing, Pre-Eminence in Technology, and Economic Strength (COMPETES) Act of 2022. This legislation is an important step to strengthen our supply chains, revitalize domestic manufacturing, and reinvigorate the innovation engine of our economy to ensure that the United States remains globally competitive in the 21st century. H.R. 4521 is aligned with the President’s vision to enhance American economic and scientific competitiveness; build a stronger, more diverse, and more inclusive innovation ecosystem; and invest in strengthening critical supply chains, our domestic industrial base, and regional economic growth and development”

House Rules Committee Ranking Member Tom Cole (R-OK) criticized Democrats for not taking a bipartisan approach to drafting this bill like the Senate did when it considered its own version of the bill:

“Unfortunately, today’s legislation is a real missed opportunity, both for the House of Representatives and the nation. Communist China continues to pose significant challenges on the international stage. These challenges include, but are not limited to, China’s ongoing genocide against its Uyghur Muslim minority; China’s threat to Taiwan, its democratic neighbor; China’s ongoing adventurism in the South China Sea; China’s unfair trade practices, including currency manipulation and the use of subsidies to undercut American businesses; and China’s relentless quest for natural resources worldwide. These and other practices present clear challenges to the United States and the global community. As such, Democrats and Republicans and the Senate should have spoken together with one voice on a bipartisan bill with real teeth that repositions the United States to confront China’s lust for hegemony. But instead of doing so, Democratic leadership has once again decided to put forward a partisan bill, drafted behind closed doors in the Speaker’s office. While portions of the package may have been marked up in the committees of jurisdiction in other forms, the entire package has not received a markup before it came to us today. Democratic leadership has also failed to even ask for any Republican input before putting it together…

What is most disturbing is that the package before us consists of toothless policies that will do nothing to stem China’s global lust for power. No new policy provisions to combat Chinese military ventures, and no new economic policies to reposition America to better compete. Instead, we get a laundry list of requests for a "strategy" and requirements to file "reports," none of which will actually address the real problem.”

“Pelosi’s new bill, the COMPETES Act, is no exception. It is weak and fails to properly confront the China threat, and it throws billions at unrelated issues that have nothing to do with our national security. For example, it includes millions to study coral reefs and gives billions to the United Nations Green Climate Fund. At the same time, there is no money to enforce our sanctions laws or increase our military strength. This is why conservatives wrote our own China bill last summer that is just 0.5% the cost of the USICA and includes tough measures like sanctions that would limit the Chinese Communist Party’s ability to subvert our nation’s institutions and steal our intellectual property. If Congress really wanted to confront the China threat, we’d pass the RSC’s Countering Communist China Act.”

The Senate passed its own version of legislation to compete with China in economic and geopolitical domains last summer on a 68-32 vote. If the House passes a different bill as expected, lawmakers will attempt to negotiate a compromise that can pass both chambers.