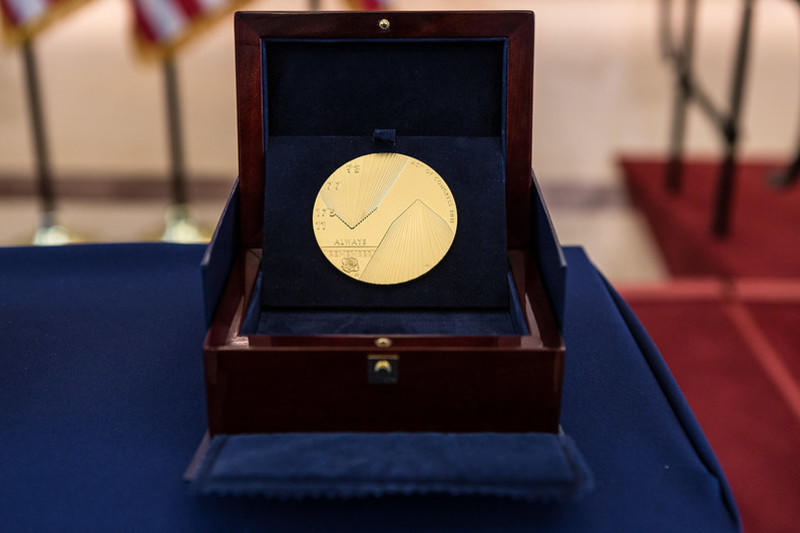 This bill would award four Congressional Gold Medals to the United States Capitol Police officers who protected the U.S. Capitol on January 6, 2021.

Medals would be distributed as follows:

The secretary of the treasury would be responsible for making arrangements for the U.S. Mint to strike these medals. The secretary would also be authorized to create bronze duplicates of the medals for sale as commemorative items.

Individual law enforcement officers whose actions on January 6th were particularly commendable, including Capitol Police Officer Eugene Goodman who was already awarded a Congressional Gold Medal, Officer Brian Sicknick who died after defending against the riot, and others should receive individual awards rather than a collective honor.

Law enforcement officers who protected the Capitol during the January 6, 2021 riot; the U.S. Capitol Police; the Metropolitan Police Dept. of the District of Columbia; the Smithsonian Institution; the Capitol building; and the Architect of the Capitol.

In-Depth: House Speaker Nancy Pelosi (D-CA) introduced this bill to commemorate the heroic actions of those who protected the U.S. Capitol during the January 6, 2021 insurrection. When she introduced a similar piece of legislation (H.R. 1085, which differs from this bill only in that this bill would also award a Congressional Gold Medal to the U.S. Capitol building) earlier this year, Speaker Pelosi said:

“We have been reminded of the extraordinary valor of the United States Capitol Police, the men and women who risked and gave their lives to save ours, becoming martyrs for our democracy. The outstanding heroism and patriotism of our heroes deserve and demand our deepest appreciation, which is why I am honored to introduce legislation to pay tribute to the Capitol Police and other law enforcement personnel who protected the U.S. Capitol on January 6 with the Congressional Gold Medal: the highest honor that the Congress can bestow.  The service of the Capitol Police force that day brings honor to our Democracy, and their accepting this Gold Medal will bring luster to this award.”

“To have our police officers’ bravery acknowledged at a time when they’re experiencing tremendous emotions and exhaustion is a gift. We have too many heroes to count and we are humbled Congress may recognize them in this way.”

This legislation has no cosponsors and has not yet received a committee vote.

Of Note: The Congressional Gold Medal is considered to be one of the most prestigious ways for Congress to recognize individuals or institutions and express public gratitude on behalf of the nation. To award it, Congress passes a bill that is signed into law by the president, at which point there is a process for designing, minting, and awarding the gold medal. After the medal is struck, a formal ceremony is often scheduled for it to be awarded to the recipient. It is not to be confused with the Congressional Medal of Honor, which is the nation’s highest military award for bravery and is awarded by the president in the name of Congress.

The first Congressional Gold Medal was awarded to George Washington during the Revolutionary War in 1776, and for decades it was primarily awarded to military leaders. Since then, it has been awarded more broadly to over a hundred individuals and groups, including the Little Rock Nine, Mother Teresa of Calcutta, the Navajo Code Talkers, and the Fallen Heroes of 9/11.

All Congressional Gold Medal legislation must be cosponsored by at least two-thirds of the House and Senate before either chamber’s committees will consider the bills. T

The January 6 Capitol riot represented one of the worst days of injuries for U.S. law enforcement since the September 11, 2001 terrorist attacks. At least 138 officers — 73 from the Capitol Police and 65 from the Metropolitan Police Dept. in Washington, D.C. — were injured, according to the respective departments. The officers’ injuries ranged from bruises and lacerations to more serious damage, such as concussions, rib fractures, burns, and even a mild heart attack.