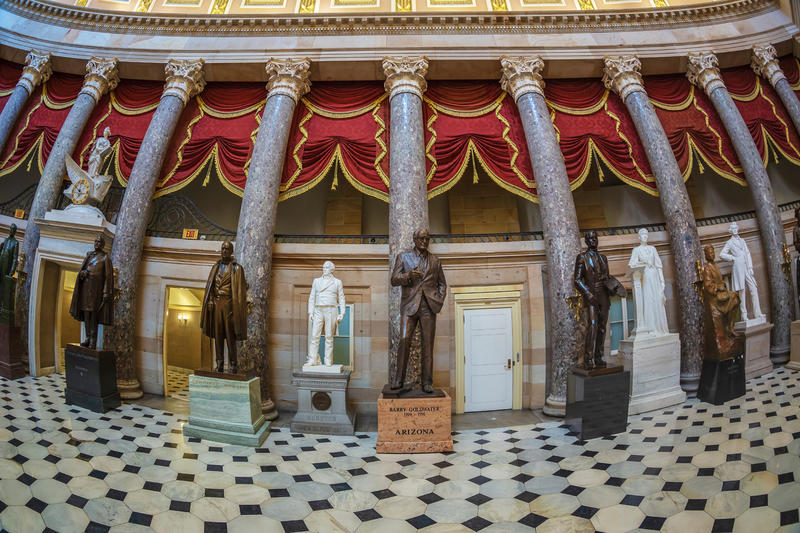 Should Statues of Confederates or Other Defenders of Slavery & White Supremacy Be Removed From the U.S. Capitol? (H.R. 3005)

This bill would direct the removal of a bust of a Supreme Court justice who authored an opinion upholding slavery from display in the Capitol’s Old Supreme Court Chamber, in addition to the removal of statues depicting individuals who joined the Confederacy or otherwise defended slavery, segregation, and white supremacy from Statuary Hall. It would authorize appropriations as may be necessary to carry out this legislation.

Statues of former Confederates and supporters of slavery or white supremacy should not be publicly displayed in the U.S. Capitol and states that have sent such statues need to replace them. This bill would ensure that the offending statues are removed from public display until the states that sent them to the Statuary Hall Collection arrange for them to be returned.

Several states are already in the process of replacing their statues depicting former Confederates or other supporters of slavery & white supremacy, and those that aren’t will likely follow suit soon. There’s no need for Congress to move the statues out of public view in the meantime.

States with statues of former Confederates or supporters of slavery and white supremacy on display at Statuary Hall; and visitors to the U.S. Capitol.

In-Depth: House Majority Leader Steny Hoyer (D-MD) reintroduced this bill to remove statues of supporters of slavery from the Capitol during 116th Congress, when he said the House would “show our country and the world that statues honoring defenders of racism, slavery, segregation, and white supremacy are not welcome in the U.S. Capitol building,” and added:

“It is appropriate that our bill removes the bust of Chief Justice Roger B. Taney, the author of the Dred Scott ruling in 1857 that upheld slavery, from the Old Supreme Court Chamber and replaces it with that of Justice Thurgood Marshall, a Marylander who fought for civil rights and equality as the Court’s first African-American justice.  It is reprehensible that individuals who did so much to divide our country and dehumanize African Americans are honored in the halls of Congress. I hope all of my colleagues on both sides of the aisle will join us in supporting this bill to right historical wrongs and ensure that the only people honored with busts and statues in the Capitol are those whose actions furthered the causes of liberty, unity, and equal rights.”

“In this moment, the horrors of systemic racism are front and center and the manifestations are before the public each and every day. The removal of Confederate statues from the U.S. Capitol is an important step in dismantling the systems that hold us back on our path forward. As I said when I first introduced the Confederate Statue Removal Act in 2017: these painful symbols of bigotry and racism have no place in our society and certainly should not be enshrined in the U.S. Capitol. Justice Thurgood Marshall, a champion of equality and justice, is a fantastic addition to our Capitol and embodies the efforts we are making to eliminate symbols of hate and injustice.”

The National Statuary Hall Collection contains statues of two historical figures associated with each state, that are supplied by each state and displayed in the U.S. Capitol. Some statues that are or have been included in the National Statuary Hall Collection depict figures who are controversial because of their connections to the Confederacy, slavery, or Jim Crow, including:

Because Congress doesn’t have discretion over what statues states send for display, this bill would simply remove them from display in areas accessible to the public rather than sending them back to their state of origin.

This legislation has the support of 17 cosponsors, all of whom are Democrats. Its predecessor passed the House on a bipartisan vote of 305-113 during the 116th Congress, but wasn’t considered by the Senate.