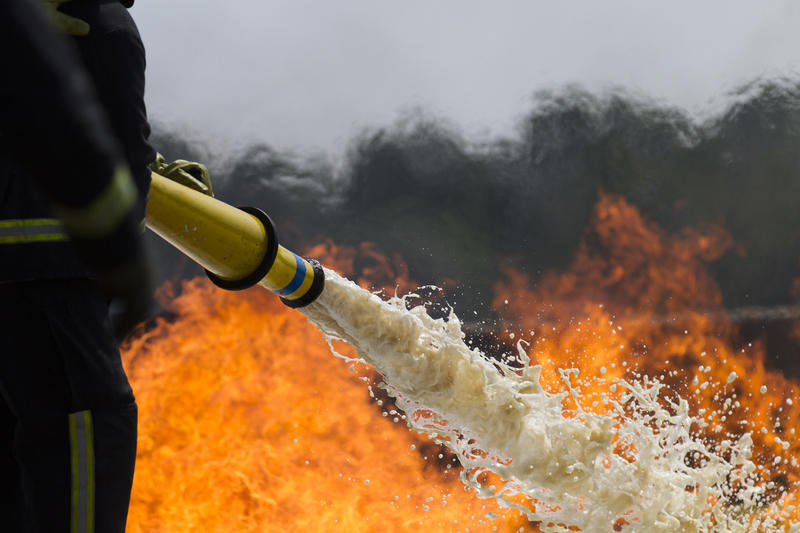 Should the EPA Designate PFAS as Hazardous Substances & Monitor Their Presence in Water Systems? (H.R. 2467)

This bill — the PFAS Action Act of 2021 — would require the Environmental Protection Agency (EPA) Administrator to designate all perfluoroalkyl and polyfluoroalkyl substances (PFAS) as hazardous substances under the Comprehensive Environmental Response, Compensation, and Liability Act (CERCLA, commonly known as Superfund) within one year of this legislation’s enactment. The EPA would also be required to review all other PFAS chemicals over a five-year period and decide whether to list them under Superfund.

A narrow exemption from CERCLA liability is granted to the owners and operators of airports using PFAS firefighting foam pursuant to federal requirements for the use of such foam as long as all regulations for safe handling are followed.

Additionally, this bill would require comprehensive testing of hazards posed by PFAS exposure in land, air, and water (including drinking water), as well as in products within six months of enactment. A final rule would be issued within two years of enactment. PFAS have been used in industrial and consumer products since the 1950s in uses such as non-stick cookware, water-repellent clothing, stain resistant fabrics & carpets, cosmetics, firefighting foams, and products that resist grease, water, and oil.

This bill would also establish a five-year moratorium on the introduction of new PFAS into commerce while test data for existing PFAS is developed. It would also prohibit the introduction into commerce of PFAS chemicals under review-exemptions, such as the low volume exemption (LVE). This moratorium would have no effect on the sale or use of drugs or medical devices, as drugs and medical devices are exempt from all regulations under TSCA.

The EPA would be required to promulgate a drinking water standard for PFAS that protects vulnerable and disproportionately exposed subpopulations. At a minimum, the standard would cover PFOA and PFOS; it could cover additional PFAS at the EPA Administrator’s discretion. This bill would grant a five-year grace period during which water systems in violation of the PFAS drinking water standard would not be fined; after that point, they would be subject to financial penalties for noncompliance. To help water systems implement treatment changes to remove PFAS for their water, this bill would authorize $550 million over FY 2022-2026 for this purpose.

The EPA administrator would be required to promulgate a rule adding PFOA and its salts and PFOS and its salts to the list of hazardous air pollutants under the Clean Air Act (CAA). This bill would also set a five-year deadline for the EPA to determine whether other PFAS should also be listed as hazardous air pollutants and a one-year deadline for the EPA to issue a rule identifying major source categories of PFAS under the CAA.

Within one year of this bill’s enactment, the EPA would publish an interim guidance on the destruction & disposal of PFAS, while the waste incineration of PFAS would be prohibited.

The EPA Administrator would be required to investigate methods and means to prevent contamination of surface waters, including source waters used for drinking water purposes, by a group of ten PFAS known as “GenX.”

The EPA Administrator would be required to establish a website with information relating to the testing of household well water, and to develop a risk-communication strategy to inform the public about the hazards of PFAS.

This legislation would make U.S. territories eligible for financial assistance designated for addressing emerging contaminants such as PFAS.

The EPA Administrator would be required to promulgate a rule establishing effluent limitations and pretreatment standards for the introduction or discharge of PFAS. To provide financial assistance to owners and operators of publicly owned treatment works to implement a PFAS pretreatment standard, this bill would authorize $200 million a year from FY 2022-2026.

While the federal government needs to help states that are disproportionately affected by PFAS contamination, more scientific research needs to be done to understand how the more than 5,000 chemicals classified as PFAS work before this bill’s aggressive mandates are imposed. More moderate steps should be taken in the interim.

Consumers & the public’s health; companies that use PFAS in their products; community water systems & states; and the EPA.

“PFAS contamination is a pressing issue for countless communities, and while the EPA under President Biden is working hard to address the issue, it is still playing catch up after four years of inaction. One year after the House passed this bill, we still don’t have a drinking water standard, a test rule, or a hazardous substance designation for even a single PFAS chemical.”

After this bill passed the House Energy and Commerce Committee, Rep. Pallone said:

“Protecting Americans’ drinking water means protecting it from toxic PFAS chemicals, which are right now contaminating not only our water, but also our household supplies. This contamination poses severe, demonstrated health risks that we simply cannot afford to ignore. The PFAS Action Act will regulate these toxic ‘forever chemicals,’ clean up contamination, and protect public health.”

In the previous Congress, Rep. Pallone offered the following statement after this bill to address PFAS contamination & exposure passed his committee:

“PFAS are persistent, toxic chemicals that last forever and spread through our water, air and soil. Today, the Energy and Commerce Committee took action to address the public health threat and growing problems associated with PFAS. This comprehensive, bipartisan legislation now includes 11 additional bills to protect Americans from PFAS and clean up waste sites. I commend all the Members who worked on this package of bills for their leadership. This legislation is critical to stopping the flow of these harmful chemicals into our environment, drinking water, cooking products, and more. I look forward to the full House voting on this bill soon.”

The United State Conference of Mayors, National League of Cities, and National Association of Counties wrote a joint letter expressing concerns about this legislation on June 22, 201:

“Our communities need financial assistance to address our drinking water infrastructure challenges, but we can not absorb costly unfunded mandates that will become an additional burden to local budgets and our residents. While we acknowledge the public health risks associated with PFAS chemicals and urge Congress and the Administration to examine PFAS contamination holistically and to take comprehensive action to address the problem, the federal government should avoid passing costs onto local governments and ratepayers for PFAS treatment and cleanup.”

During the 116th Congress, House Republicans opposed this bill in committee, arguing that its mandates are too aggressive in light of an incomplete scientific understanding of PFAS and that more moderate steps should be taken while research continues:

“We recognize the increased community anxiety that occurs due to the discovery of perfluoroalkyl and polyfluoroalkyl substance (PFAS) contamination, and we understand that some states may face disproportionate burdens without more federal action. Unfortunately, H.R. 535 as amended mandates multiple, aggressive actions based on a woefully incomplete scientific understanding of the health effects of this diverse class of up to 5,000 chemicals. More modest steps are warranted in the interim to address demonstrated health risks and additional review to cover those areas that need more attention.”

In the 116th Congress, this bill's predecessor passed the House by a 247-159 vote with the support of 66 bipartisan House cosponsors, including 62 Democrats and four Republicans. The Republican-controlled Senate did not take up the bill.

This legislation passed the House Energy & Commerce Committee on a 31-19 vote along mostly party-lines and has the support of 66 cosponsors, including 62 Democrats and four Republicans.

Of Note: PFAS exposure has been linked to severe adverse health impacts, including high cholesterol, thyroid disease, pregnancy-induced hypertension, ulcerative colitis, and kidney and testicular cancer. In a 2007 study, PFOS and PFOA were detected in over 98% of samples taken across the United States.

Although most manufacturers have voluntarily phased out PFOA and PFOS, thousands of PFAS formulations continue to be produced, and only a small percentage of them have been reviewed.