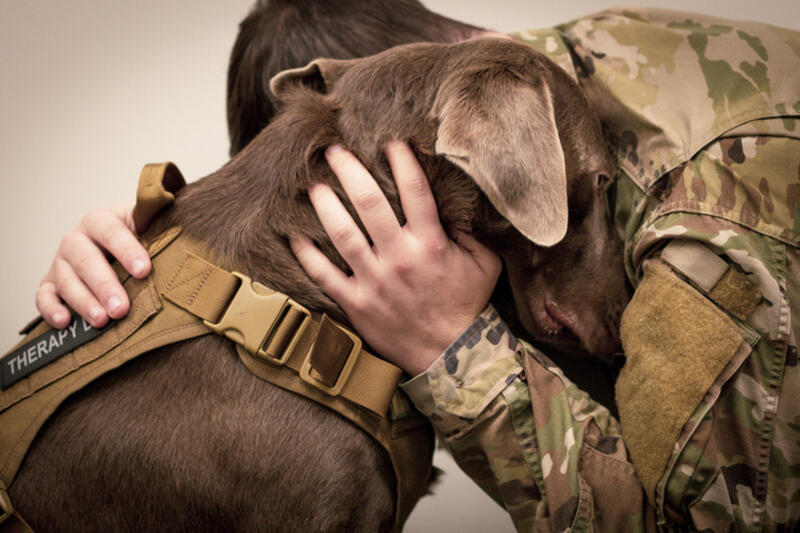 This bill — the PAWS for Veterans Act — would direct the Secretary of Veterans Affairs (VA) to carry out a five-year pilot program on dog training therapy for wounded veterans with mental illnesses who don’t have mobility impairments. This pilot program would be carried out by at least five Dept. of Veterans Affairs (VA) medical centers located in geographically diverse areas. At the program’s completion, the veterans would have the option to adopt the dogs that they assisted in training if the veteran and the veteran’s health provider (in consultation with the entity that provided the canine training) determine that it would be in the veteran’s best interest to adopt the dog.

To carry out this pilot program, the VA Secretary would enter into agreements with nongovernmental entities that they have determined have the ability to provide the canine training specified in this legislation.

Studies conducted by the VA and medical researchers, along with anecdotal evidence, have shown that veterans with PTSD may benefit from having and training service dogs. This bill would help make service dogs accessible to more veterans, and would also help veterans develop a new marketable skill (training service dogs) that could benefit them in the workforce.

The VA already has a VA veterinary health benefit under which veterans with mobility limitations associated with mental health disorders can apply for VA support to train and care for a service dog. Rather than establishing a separate program to pair non-mobility-impaired veterans with service dogs, it would make more sense to expand this existing program to also cover veterans without mobility impairments and to pay for service dogs for all eligible veterans.

Veterans; veterans with PTSD or other service-related conditions that might benefit from a service dog; veterans who want service dogs; service dog nonprofits; and the VA.

“Men and women have made unbelievable sacrifices to keep our nation safe, and this bill is a common-sense solution to help them thrive, not just survive, in their transition to civilian life. I’m incredibly grateful to our coalition for their efforts to get this bill signed into law.  This has already helped veteran[s] nationwide, and soldiers under my command in Operation Iraqi Freedom go out to restaurants again, go on planes, and mend relationships with their loved ones. Now confirmed by the VA, this unique treatment has proven to help veterans get their lives back, get their freedom back.”

When he introduced this bill in the 116th Congress, Rep. Stivers said:

“A soldier under my command during Operation Iraqi Freedom recently told me what his service dog means to him: he was able to fly on a plane for the first time in 10 years and he took his fiancée to dinner.  That is the impact this bill can have on the lives of our veterans. I’m incredibly grateful to our coalition for their efforts to create this program, and I look forward to getting this bill signed into law so that our veterans can receive the care they need.”

In a separate statement, Rep. Stivers argued that dog training will benefit veterans’ mental health in a number of ways:

“The dog training will give these veterans a new mission and that's training a dog for service. And the skills they learn in that training are something that is clinically shown to reduce the incidents of depression, to improve interpersonal relationships, to lower the risk of substance abuse, and to lower the instance of suicide.”

Rep. Stivers noted that some veterans have told him that having a service dog has helped them reduce or even cease their medications: “If you can do it with a service dog and get off the drugs, great; if you still need the drugs, that's OK, too. But we've heard anecdotally a lot of people getting off the drugs as a result of these service dogs."

Original cosponsor Rep. Kathleen Rice (D-NY), who also supported this bill in the 116th Congress, adds that the pandemic has exacerbated the need for this legislation:

“Service dogs are a proven and effective resource for veterans struggling with post-traumatic stress. And with the ongoing pandemic only exacerbating the mental health crisis, we must ensure that our veterans have access to every available mental health resource – including service dogs. This bipartisan bill is common-sense legislation that will help save lives. I’m proud to support it and I thank Representative Stivers for leading this effort once again.”

Christopher Baity, founder and executive director of Virginia-based Semper K9 Assistance Dogs, expressed support for this bill in the previous session of Congress. He said, “This bill is essential to veterans who need psychiatric service dogs. It will ensure that the highest quality service dogs are being placed with those veterans by reputable organizations.”

Christine Myran, executive director of Blue Star Service Dogs, a nonprofit that has paired approximately 150 service dogs and veterans in Michigan, says that service dogs can be therapeutic tools to treat PTSD, and that the overall training is part of the process.

This legislation passed the House Committee on Veterans’ Affairs by voice vote with the support of 313 bipartisan House cosponsors, including 195 Republicans and 118 Democrats, in the current session of Congress. Its Senate companion, sponsored by Sen. Thom Tillis (R-NC), has five bipartisan Senate cosponsors, including three Democrats and two Republicans, and has not yet received a committee vote.

In the previous session of Congress, this legislation had 324 bipartisan House cosponsors, including 189 Republicans and 135 Democrats, and passed the House by voice vote. Its Senate companion, sponsored by Sen. Deb Fischer (R-NE), had 14 bipartisan Senate cosponsors, including eight Democrats and six Republicans, and did not receive a committee vote.

Of Note: In February 2021, the VA released reports of a high-anticipated study pairing veterans with PTSD with service dogs. The VA study found that pairing veterans with service dogs, rather than emotional support dogs, resulted in fewer symptoms of PTSD and a reduced risk of suicide. This study and its results were reviewed by mental health providers, veterinarians, dog trainers, statisticians, and other research experts at the National Academies of Science, Engineering and Medicine.

Research conducted by Kaiser Permanente and Purdue University has shown that working with service dogs alleviates the symptoms of PTSD, leading to better interpersonal relationships, lower risk of substance abuse, and overall better mental health. In the study, 141 Iraq and Afghanistan war veterans suffering from PTSD were split into two groups, one of which received trained service dogs (75 veterans, the dog group) and the other of which was put on the waiting list to get a dog (66 veterans, the wait list group).

At the end of the study, the dog group’s PTSD symptom scores dropped an average of 12 points while the PTSD scores of those on the waiting list hadn’t changed at all. The dog group also had numerous other indicia of improved mental health, including:

The VA has an existing veterinary health benefit that pays for veterans with substantial mobility limitations associated with a mental health disorder to train and care for a service dog. Under this program, the Mental Health Mobility Service Dog Initiative, the VA provides comprehensive coverage for the canine’s health and wellness and any prescription medications necessary to enable the dog to perform its duties in service to the veteran. However, this program has some notable limitations. Chief among these is the fact that it does not pay for the dog or for boarding, grooming, food, or other routine expenses associated with dog ownership.