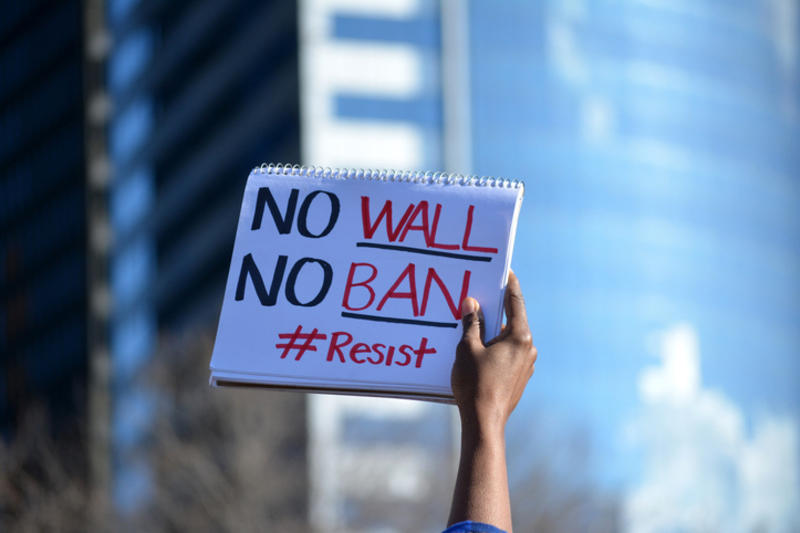 Should the President’s Power to Impose Restrictions on Entry Into the U.S. Be Limited? (H.R. 1333)

This bill, known as the NO BAN Act, would limit the president’s authority to impose limits on entry to the U.S. on the basis of religion. It would also establish a process for the president and relevant federal agencies to undertake entry bans, details of which can be found below.

If the Secretaries of State and Homeland Security determining that the entry of any non-citizens or class of non-citizens into the U.S. would threaten security, public safety, or the preservation of human rights, democratic processes or institutions, or international stability, the president could temporarily 1) suspend such persons’ entry or 2) impose any entry restrictions that they deem appropriate. These actions would be limited in scope and as narrowly tailored as possible. The president, Secretary of State, and Secretary of Homeland Security would be required to specify the duration of these restrictions and to consider waivers to these restrictions in cases of family-based or humanitarian concerns. While suspensions or restrictions are active, the Secretary of State would be responsible for submitting a report to congressional committees detailing the impact of the suspensions or restrictions.

This legislation would also require the Secretaries of State and Homeland Security to work with relevant federal agency heads to compile a congressional report on the implementation of Presidential Proclamations 9645, 9822, and 9983 and Executive Orders 13769, 13780, and 13815. These proclamations instituted entry restrictions during the Trump administration and then repealed them in the first days of the Biden administration. These reports would include information on:

This bill’s full title is the National Origin-Based Antidiscrimination for Nonimmigrants Act.

The Trump administration’s “Muslim ban” demonstrated how much power the president currently has to capriciously deny entry to the U.S. on the basis of religion. Even with President Donald Trump out of office, it’s still wise to limit future presidents’ powers to impose similarly discriminatory policies.

Presidents’ broad authority over national security matters rightly entitles them to make decisions regarding denying entry to people of certain nationalities if they deem it necessary to do so. Further, the Supreme Court ruled that the Trump administration’s entry restrictions were permissible because the executive actions made no mention of religion.

In the 116th Congress, the Congressional Budget Office (CBO) estimated that this bill would increase federal spending for health care, nutrition, education, and disability benefits provided to newly-arrived non-citizens and their children born in the U.S. The CBO estimated that this would lead to $3 million in spending over the five-year period 2020-2025 and increase the deficit by $80 million over the same period.

In-Depth: Sponsoring Rep. Judy Chu (D-CA) reintroduced this bill from the 116th Congress to strengthen the Immigration and Nationality Act to prohibit discrimination on the basis of religion and restore the separation of powers by limiting overly broad executive authority to issue future travel bans:

“The Muslim Ban was a hateful stain on our nation. Inspired only by bigotry and not any genuine national security concerns, the ban served only to separate families while stoking bigotry, xenophobia, and Islamophobia. That is why I was so grateful when President Joe Biden took action on his first day in office to rescind all versions of this ban. However, we cannot risk letting prejudice become policy again. That is why I am once again introducing the NO BAN Act to update our laws. By requiring actual evidence of a threat before there can be any such broad based bans like this, the NO BAN Act ensures that future presidents will not be able to ban people solely because of their religion. I’m proud that this bill was passed by the House last Congress and, with the help and leadership of Senator Chris Coons, I hope to see it passed again and brought to the President’s desk soon.”

When she introduced this legislation in the previous Congressional session, Rep. Chu spoke specifically of the need to repeal all of the Trump administration’s “Muslim bans”:

“America has one of the strongest vetting systems in the world and we have demonstrated an ability to safely grant visas to travelers and visitors for years. But security was always a flimsy pretext for Trump’s real goal of fomenting bigotry and dividing families, which is precisely what this ban has done. The effect of Trump’s Muslim Ban has been to leave America less safe and families suffering needless pain. That is why we introduced this legislation to repeal all of Trump’s Muslim Bans, but also to change the law so no future president can issue a similar ban without evidence.”

“We have turned the page on the tragic Muslim ban, but now we must write the next chapter – one in which no president can act through fear and prejudice to discriminate against a community of faith,” said Senator  Chris Coons. “The Muslim ban senselessly upended lives and cut off thousands of Americans from their loved ones. Only through an act of Congress can we ensure that such a discriminatory and overreaching action by a president never happens again. The NO BAN Act reasserts not only the role of Congress under our system of checks and balances, but also the proud American legacy of welcoming immigrants and refugees.”

The American Civil Liberties Union (ACLU) is among a number of advocacy organizations that supports this bill. Its Senior Legislative and Advocacy Counsel, Manar Waheed, says:

“In a moment when Black and Brown immigrants continue to bear the brunt of our broken system, the introduction of the NO BAN Act is a welcome change, signaling the importance of protecting us all against future discriminatory bans. President Biden made the rescission of the Muslim ban and its targeting of Africans a Day One priority for his administration, and Representative Chu and the House of Representatives today made it their priority to ensure that this discrimination never happens against our communities again. We hope that this bill marks the beginning of a new chapter in which Black and Brown immigrants, including Muslims, are priorities for us all.”

Judiciary Committee Republicans opposed this bill when it was considered in their committee this Congress. In an April 16, 2021 minority views report, the Republicans called this an “assault” on “successful Trump immigration policies” whose repeal have led to a criss at the southern border. They further accused committee Democrats of not trusting the Biden administration to act appropriately on immigration issues:

“By reporting H.R. 1333 favorably from the Committee, Chairman Nadler and Committee Democrats appear not to trust that President Biden will utilize the 212(f) authority effectively or in a non-discriminatory manner. H.R. 1333 strips the President of authority to deny entry of certain aliens to the United States, weakens national security, and invites litigation against the U.S. government.”

Committee Republicans also criticized this bill for taking power from an elected official (the president) in favor of giving that power to “unelected federal bureaucrats who are unaccountable to the American people.” They contended that “the transfer of authority from an unelected official to unelected bureaucrats is a bad idea no matter the circumstances,” and added that is particularly dangerous with the current surge of unauthorized migrants at the southern border.

Judiciary Committee Republicans also argued that this legislation could limit security-related programs and “dangerously curtail” the president’s authority to use executive discretion to impose restrictions on the entry of groups of people that may threaten U.S. security interests. Finally, they argued that this legislation is “a recipe for litigation,” as it provides for an expansive judicial review that “invites an expansive interpretation.”

During the 116th Congress, the Trump White House expressed opposition to a legislative package that included this bill and threatened to veto it over the inclusion of this bill and the Access to Legal Counsel Act, while also chiding Democrats for adding prescription drug legislation to the bill that should’ve been considered separately. It wrote in a statement of administration policy:

“Title I of H.R. 2486 [the NO BAN Act] would harm the national security of the United States. Notably, the President’s authority to restrict travel into the United States has been central to the Administration’s ongoing efforts to safeguard the American people against the spread of COVID-19. At a minimum, Title I of H.R. 2486 would cause dangerous delays that threaten the safety, security, and health of the American people.”

This legislation has 159 House cosponsors, all of whom are Democrats. It has been discharged by the House Committees on Foreign Affairs, Homeland Security, and Intelligence. It’s supported by a range of civil rights, religious tolerance, and Muslim-American advocacy organizations, including Asian American Advancing Justice- AAJC, the Brennan Center for Justice, and the American Muslim Empowerment Network.

In the 116th Congress, this bill passed the House Judiciary Committee on a party-line vote of 22-10, with Democrats in favor and Republicans opposed, and had 219 Democratic cosponsors. Its Senate companion in the previous Congressional session, sponsored by Sen. Chris Coons (D-DE), had 41 Senate cosponsors (39 Democrats and two Independents) and didn’t receive a committee vote. This legislation was also included in Rep. Alma Adams’ (D-NC) FUTURE Act (H.R.2486), which had 28 bipartisan House cosponsors and was passed by a final House vote of 231-184.

Of Note: While he was campaigning for president, former President Donald Trump called for “a total and complete shutdown Muslims entering the United States until our country’s representatives can figure out what the hell is going on.” After his inauguration in early 2017, he proceeded to sign executive orders banning travel from several Muslim-majority nations that are hotbeds of terrorism, including Iraq, Syria, Iran, Sudan, Libya, Somalia, and Yemen with inadequate traveler vetting processes. After lawsuits led to the ban being blocked, it was reintroduced, blocked again, and reintroduced. Although no versions of the travel ban contained language about religion, Democrats referred to it as a “Muslim ban”, which fact-checkers noted was a false allegation.

Ultimately, the Supreme Court weighed in on the third iteration of the travel ban, which restricted travel by nationals of five Muslim-majority nations -- Iran, Libya, Somalia, Syria, and Yemen -- plus North Korea and Venezuela. Chief Justice John Roberts wrote the court’s majority opinion in the 5-4 decision upholding the travel ban, in which he noted it was “facially neutral toward religion” and added:

“The proclamation is expressly premised on legitimate purposes: preventing entry of nationals who cannot be adequately vetted and inducing other nations to improve their practices. The text says nothing about religion.”

The court’s liberal justices wrote in a dissent that Trump’s comments from the campaign trail were sufficient evidence that the travel ban was motivated by anti-Muslim animus rather than national security justifications.