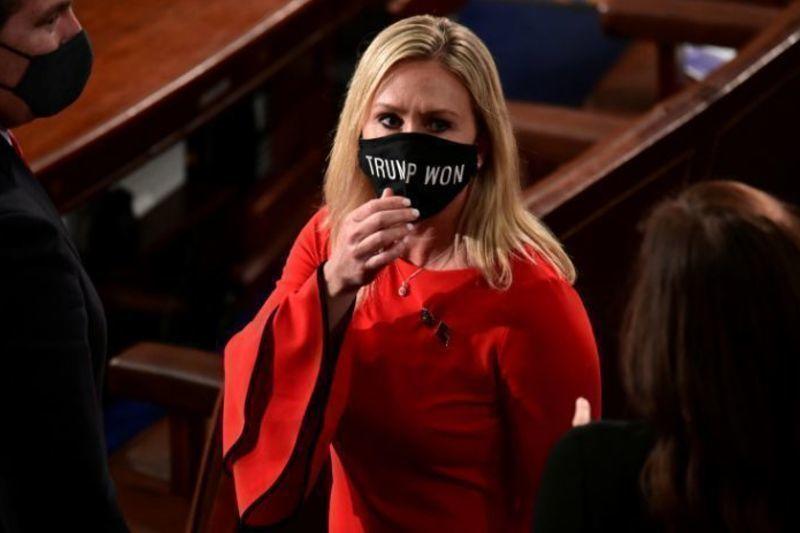 This resolution would remove Rep. Marjorie Taylor Greene (R-GA) from the two committees she is a member of — the Budget Committee and the Education and Labor Committee. The resolution states that she “should be removed from her committee assignments in light of conduct she has exhibited” that doesn’t “reflect creditably on the House.”

As a simple resolution that addresses the membership of House committees, this legislation wouldn’t advance beyond the House if passed.

Rep. Marjorie Taylor Greene (R-GA) has made public calls for political assassinations, spread a variety of conspiracy theories, and publicly accused a survivor of a school shooting of being a paid actor. Her actions reflect poorly on the House, so the House should remove her as a member of the Budget Committee and the Education & Labor Committee.

Congresswoman Greene’s comments and actions are wrong and offensive, but the House as a whole shouldn’t strip a lawmaker of committee assignments — that decision should be made by voters in her district or her party’s conference. The House has important work to do and shouldn’t waste floor time debating this resolution.

As a simple resolution, this legislation would have no cost.

In-Depth: Rep. Marjorie Taylor Greene (R-GA) is facing backlash over her past conduct, which included calls for members of Congress to be executed, statements that Sandy Hook and other school shootings were staged (including the harassment of a Stoneman Douglas student), and expressing support for a variety of conspiracy theories. In addition to this resolution removing her from committees, Democrats have proposed expelling her or censuring her.

“After several conversations and literally running away from reporters, Minority Leader Kevin McCarthy (Q-CA) made clear that he is refusing to take action against conspiracy theorist Rep. Marjorie Taylor Greene. As a result, the House will continue with a vote to strip Greene of her seat on the esteemed House Committee on Education & Labor and House Committee on Budget. McCarthy’s failure to lead his party effectively hands the keys over to Greene – an anti-Semite, QAnon adherent and 9/11 Truther.

“Past comments from and endorsed by Marjorie Taylor Greene on school shootings, political violence, and anti-Semitic conspiracy theories do not represent the values or beliefs of the House Republican Conference. I condemn those comments unequivocally. I condemned them in the past. I continue to condemn them today. This House condemned QAnon last Congress and continues to do so today. I made this clear to Marjorie when we met. I also made clear that as a member of Congress we have a responsibility to hold ourselves to a higher standard than how she presented herself as a private citizen. Her past comments now have much greater meaning. Marjorie recognized this in our conversation. I hold her to her word, as well as her actions going forward.

I understand that Marjorie’s comments have caused deep wounds to many and as a result, I offered Majority Leader Hoyer a path to lower the temperature and address these concerns. Instead of coming together to do that, the Democrats are choosing to raise the temperature by taking the unprecedented step to further their partisan power grab regarding the committee assignments of the other party. While Democrats pursue a resolution on Congresswoman Greene, they continue to do nothing about Democrats serving on the Foreign Affairs Committee who have spread anti-Semitic tropes, Democrats on the House Intelligence and Homeland Security Committee compromised by Chinese spies, or the Chairwoman of the House Financial Services Committee who advocated for violence against public servants.”

Of Note: Members of Congress are typically removed from committees by the leaders of their respective party. The most recent example of this occurred in the last Congress, when Republicans removed then-Rep. Steve King (R-IA) from his committee assignments in response to his controversial comments.