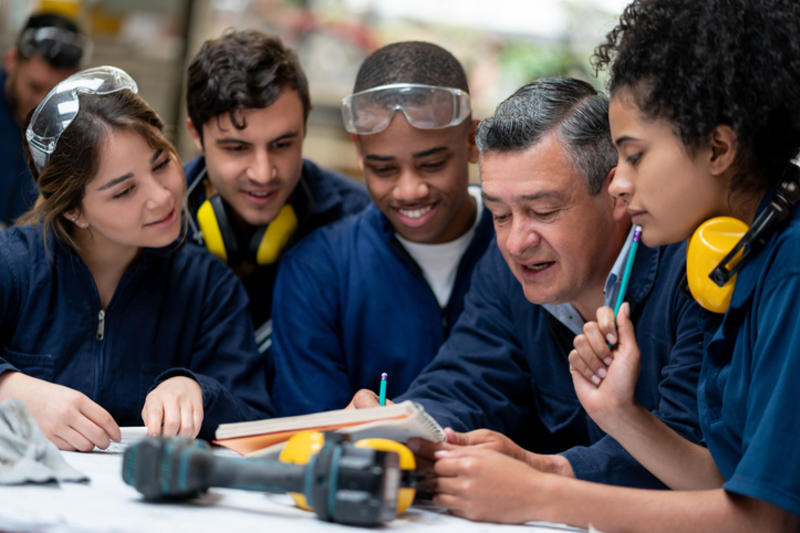 Should the Dept. of Labor’s Registered Apprenticeship Program Be Expanded? (H.R. 447)

This bill, known as the National Apprenticeship Act of 2021, would provide statutory authority for the registered apprenticeship program at the Dept. of Labor (DOL). It would also support grant-related programs, among other provisions. In total, this bill would authorize over $3.5 billion for apprenticeship programs from 2021-2026. A breakdown of this bill’s various provisions can be found below.

This bill would provide statutory authority for the Office of Apprenticeship (OA) within the DOL, which is responsible for:

Finally, this bill would establish criteria for various programs in statute. These criteria would include quality standards for apprenticeships, requirements for apprenticeship agreements between a program sponsor and an apprentice, and acceptable uses for grant funds awarded under this bill.

Apprenticeship programs are an important job and career readiness option, especially in the current environment where many people may no longer be able to afford — or want to attend — traditional postsecondary education, or may need retraining in new industries after a job loss. Supporting and expanding the existing apprenticeship program at the Dept. of Labor is the easiest way for Congress to expand the availability of apprenticeships across the United States.

In-Depth: Sponsoring Rep. Bobby Scott (D-VA) led a bipartisan group of Members in reintroducing this bill to reauthorize the National Apprenticeship Act to create nearly one million new Registered Apprenticeship, youth apprenticeship, and pre-apprenticeship positions over the next five years. In a press release upon this bill’s introduction, Rep. Scott said:

“Registered Apprenticeships remain one of our most successful tools for connecting workers with in-demand skills and good-paying jobs. This bipartisan bill – which passed the House will overwhelming support last year – will create nearly 1 million new apprenticeships and expand these opportunities to include a more diverse group of workers and a wider array of industries. It also enhances youth apprenticeship and pre-apprenticeship programs that will prepare a new generation of workers for the modern economy. Congress must use every tool we have to address the widespread unemployment caused by the COVID-19 pandemic. I look forward to once again passing this legislation through the House and I hope [the] Senate [will] act quickly to get this bill on the president’s desk. The National Apprenticeship Act is an important part of our renewed effort to help workers get back on their feet and build back a better economy.”

In the 116th Congress, sponsoring Rep. Susan Davis (D-CA) introduced this bill to expand apprenticeships and invest in workforce training:

“The National Apprenticeship Act will build on the success of apprenticeship programs by increasing our investment in American workers and creating more opportunities for them to get critical skills that lead to high-paying careers. We know the Registered Apprenticeship system is very successful, but it is just not having the impact on the workforce we need. By increasing standards, accountability, and coordinating programs with higher education institutions along with a greater investment, it will benefit more workers, the taxpayers, and our economy.”

In its fact sheet on this bill in the previous Congress, the House Education and Labor Committee noted that this legislation would create nearly one million new apprenticeship opportunities in addition to the current expected growth of the apprenticeship system. The committee also noted that expanding the apprenticeship program would yield $10.6 billion in net benefits to U.S. taxpayers. These would come in the form of increased worker productivity and decreased spending on public assistance programs and unemployment insurance.

The National Skills Coalition supported this legislation in the 116th Congress. Its Director of Government Affairs, Kate Spiker, says funding for youth apprenticeships and support for business-education partnerships is “critical to expanding apprenticeship throughout the country and bringing together entities with the knowledge, experience, and ability to best serve workers and businesses.”

The majority of House Education and Labor Committee Republicans opposed this bill when it was considered in their committee in the 116th Congress. In their minority views report, these committee members argued that registered apprenticeships give the DOL, rather than businesses themselves, too much power to determine training needs in industries:

“Although there is little data available on non-registered earn-and-learn programs, it is estimated that they comprise more than 80 percent of all apprenticeship programs. Businesses have expressed concerns that participation in registered apprenticeships allows DOL to dictate the skills their business must provide to apprentices in specific industries rather than allowing the businesses to determine what is needed. If a business created an apprenticeship model that meets their needs, then attempting to mold their program to fit the requirements of a registered apprenticeship would be counterproductive… Congress should update the NAA, but that update must be focused on meeting the needs of individuals seeking opportunities for advancement in the workforce and employers seeking to bridge the skills gap. While H.R. 8924 may be a step in the right direction in some aspects, the bill too often simply rubber stamps a decades old system, does not go far enough to streamline registered apprenticeships for today’s economy, and does not protect business’ ability to tailor their programs to individual needs.”

Apprenticeships are arrangements that include a paid-work component and an educational or instructional component in which an individual obtains workplace-relevant knowledge and skills. Companies with apprenticeship programs register with either the DOL or a state labor agency. Program participants are paid by the employer while they receive training at work and in an educational setting (such as a college classroom or trade school). At the end of the program, the apprentice receives a job and an industry-recognized credential based on passing some form of assessment. Apprenticeship programs are overseen by either the federal government or a state agency in order to ensure that they meet national quality standards.

In 2016, then-National Economic Council Director Jeffrey Zients and then-Secretary of Labor Thomas Perez argued that apprenticeships are a strategic investment that pays dividends for both employees and employers. They observed that 91% of apprentices are employed after completing their programs, and that the average starting salary for someone coming out of an apprenticeship program is over $60,000. They also noted that employers benefit from apprenticeship programs, as every dollar invested in an apprentice returns $1.47 to the employer in the form of increased productivity, reduced waste, and greater innovation.

Brent Parton, deputy director of the center on education and skills at the New America Foundation, argues that growing the U.S. apprenticeship system, “even at a modest level, could be transformative.” He adds that apprenticeship is “an underutilized way of learning, something that’s really been something of a best-kept secret in a handful of industries.”

Due in part to their rarity in the U.S., apprenticeships also don’t have a well-defined relationship with higher education. Governing’s J.B. Wogan observes, “Proponents often trip over how to describe [apprenticeships] in relation to higher education: Are these part of someone’s eventual path to a four-year bachelor’s degree, or are they a cost-effective substitute for college?”

There are also practical barriers to expanding apprenticeship as a concept. The modern economy, in which workers have increased mobility and an easier time switching jobs, makes employers wary of investing in worker training, such as apprenticeships. Additionally, because apprenticeships train workers more narrowly than traditional college degrees, workers who are trained in such programs are among the most vulnerable workers during recessions, as their relatively narrower skill sets and less flexible knowledge can make it difficult to switch between industries.