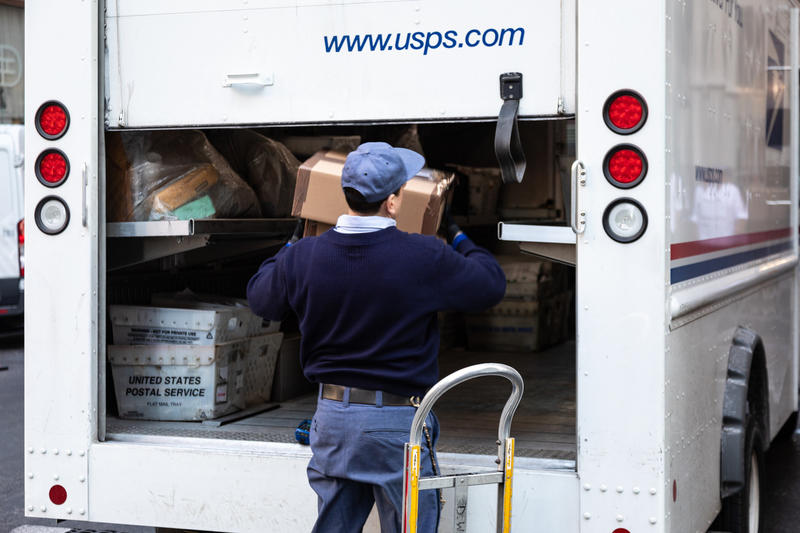 Providing the U.S. Postal Service With $25B & Prohibiting Operational Changes Ahead of the Election (H.R. 8015)

This bill — the Delivering for America Act — would restrict the U.S. Postal Service (USPS) from implementing or approving any change to the operations or level of service provided by USPS from those in effect on January 1, 2020, that would reduce service performance or impede prompt, reliable, and efficient services. USPS would be required to reverse any policies that cause delay in processing, delivery or non-delivery of mail. Additionally, this bill would provide USPS with $25 billion in funding and require it to postmark election-related mail and process it the same day it is received.

Specifically, this bill would prohibit the following actions:

This bill would appropriate $25 billion in FY2020 funding for the Postal Service Fund that would remain available until expended, of which $15 million would go to salaries and expenses in the Office of Inspector General.

In light of the ongoing pandemic and projections that a record-breaking number of Americans will cast their ballot by mail in the upcoming election, now is not the time to implement changes at the U.S. Postal Service that could slow the processing of election mail. This bill stops and reverses all such changes, and provides the USPS with an additional $25 billion in funding to operate.

The USPS believes it has enough cash to operate normally through August 2021 and has a $10 billion line of credit it hasn’t utilized yet, so the $25 billion provided by this bill is unnecessary. USPS can also make necessary changes to its operations while maintaining capacity to process all election mail in a timely manner, given that it will represent less than 2% of all mail between now and the election.

In-Depth: House Oversight Committee Chairwoman Carolyn Maloney (D-NY) offered the following statement on the introduction of her bill to provide $25 billion in funding for the USPS and to prevent it from undertaking operational changes:

“Our Postal Service should not become an instrument of partisan politics, but instead must be protected as a neutral, independent entity that focuses on one thing and one thing only — delivering the mail. Millions of people rely on the Postal Service every day to communicate, to access critical medications, and to vote. At this juncture in our nation’s history, when the number of Americans voting by mail for this Presidential election is expected to more than double from the last, Congress must protect the right of all eligible citizens to have their vote counted. A once-in-a-century pandemic is no time to enact changes that threaten service reliability and transparency. The Delivering for America Act would reverse these changes so this fundamental American service can continue unimpeded.”

USPS has been in a financially unsustainable position for years due to unfunded liabilities that totalled $161 billion in 2019, including $119 billion in pension benefits and retiree health benefits, coupled with declining mail volume. A Government Accountability Office (GAO) study found that the USPS incurred net losses of $78 billion for fiscal years 2007 through 2019, including a net loss of $8.8 billion in 2019 alone, as mail volume and revenue continued to decline.

The coronavirus pandemic has exacerbated the financial situation due to steep declines in mail volume, although the USPS reportedly has enough cash on hand to continue normal operations through August 2021 and can tap into a $10 billion Treasury Dept. credit line established by the CARES Act if needed.

Because of its financial condition, USPS has been trying to reform its operations to be more efficient and save taxpayer money, but several recent reforms sparked controversy in light of the upcoming 2020 election, particularly cutting back on overtime and leaving behind late arriving mail for delivery the following day. In response to the controversy, Postmaster General Louis DeJoy said he is postponing any operational changes until after the election and that USPS has “ample capacity to deliver all election mail securely and on time.” Two USPS executive vice presidents wrote an op-ed in USA Today which stated:

“On any given day, the Postal Service delivers more than 425 million pieces of mail, and our best estimates are that election mail will account for less than 2% of all mail volume from mid-September until Election Day. Given our available processing capacity, we can easily handle the anticipated increase in election mail due to the COVID-19 pandemic, without impact to on-time performance.”

This legislation has the support of 157 cosponsors, including 156 Democrats and one Republican.