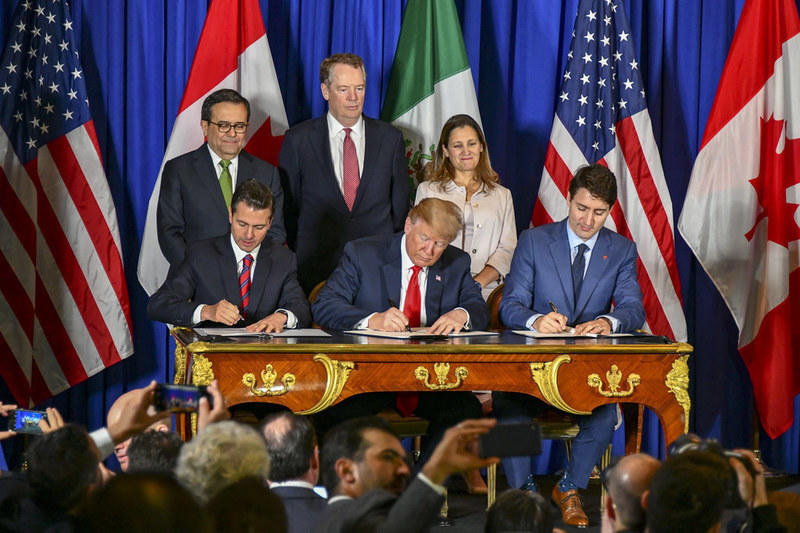 This bill would implement the United States-Mexico-Canada Agreement (USMCA) and replace the North American Free Trade Act (NAFTA) in governing trade between the three nations. The USMCA would reduce tariffs between the three countries, expand market access, protect intellectual property protections, promote manufacturing, and increase opportunities for small businesses. A breakdown of its various provisions can be found below.

The USMCA will provide a much-needed modernization of the trading relationship between the U.S., Mexico, and Canada. This bipartisan trade agreement will create jobs in the U.S., strengthen American manufacturing & intellectual property, open markets to U.S. exporters, and contains strong enforcement mechanisms to protect labor and environmental interests.

While it may be bipartisan, the USMCA doesn’t do enough to open markets in Mexico & Canada to U.S. exporters or contain strong enough protections for the environment and workers. It should include stringent provisions to bind the U.S., Mexico, and Canada to reducing carbon emissions and fighting climate change. The USMCA won’t be an improvement on NAFTA.

Consumers & businesses in the U.S., Mexico, and Canada; and those countries’ governments.

The CBO estimates that enacting this bill decrease budget deficits by $3.044 trillion over the 2020-2029 period due to increased tax receipts.

“The implementing bill before us is the result of many months of negotiations between the House Democrats and Ambassador Lighthizer, and I’m very proud of the outcome we’ve reached… When we assumed the majority this year, we were asked to consider a renegotiated NAFTA that had structural flaws in a number of key areas: enforcement, labor rights, environment, and access to medicines… The improvements to the USMCA that we negotiated finally make the agreement enforceable by preventing a country from being able to block the formation of a dispute settlement panel… Over the 25 years of the NAFTA, there have been 39 petitions filed documenting the exploitation of workers, and zero enforcement actions to remedy those violations. In close partnership with our labor unions and with the robust support of the Ways & Means Committee Democrats, we negotiated improvements to the rules and to our monitoring regime, and we established a new enforcement mechanism… On monitoring, for the first time we have created a proactive monitoring regime for the labor obligations in a trade agreement. The implementing bill establishes an Interagency Labor Committee that will actively monitor Mexico’s compliance and report to Congress… The USMCA will now include the highest environmental standards of any trade agreement and will include a new customs verification agreement to enhancement enforcement… With the dedication of the Working Group Members appointed by the Speaker, we also secured important changes in the USMCA that preserve Congress’s ability to change U.S. law to address the crisis we face with respect to high prescription drug prices. These changes set a new standard for U.S. trade agreements and demonstrate that trade agreements can achieve broad bipartisan support if they empower workers, protect patients’ access to affordable healthcare, and improve our shared environment. I’m proud to support this agreement and the implementing bill before us.”

“It goes without question, USMCA is a sorely needed modernization of NAFTA. It has been over 25 years since we updated our trading relationship with Mexico and Canada, and a lot has changed since then. We didn’t have Google in 1994. We didn’t receive news on our smartphones. Netflix didn’t exist. USMCA brings our trading rules into the 21st Century and will be a force multiplier for America’s already strong economy. President Trump and Ambassador Lighthizer have fought hard and delivered on their promise for a pro-growth and modern trade pact. And because of their leadership, we now have a trade deal that will deliver historic wins for our economy. And that’s because this is a trade deal that is all about growth. USMCA will set the stage for billions more in economic activity. It creates, for the first time, rules for competing in the digital economy. With a brand-new digital chapter, American innovators will be empowered to sell goods and services globally, allowing for a stronger American economy. And it pries open Canada’s market for U.S. farmers and ranchers to sell American dairy, wheat, chicken, eggs, and turkey. Our services providers will be able to lock in access to Mexican and Canadian customers. And the agreement is enforceable, allowing us to challenge violations and stopping countries from blocking those challenges, holding Mexico and Canada accountable for these new rules. For America, this means more jobs. It means more customers. And it gives America’s innovators the tools they need to succeed here in America as we compete with countries like China. Independent experts predict this new agreement to spur over $68 billion in new economic activity. More than 176,000 American jobs are set to be created, including 76,000 new auto-sector jobs. And best of all for the American people, USMCA is a truly bipartisan agreement, not a trade deal filled with radical leftist ideas.”

President Donald Trump sent a letter to Congress expressing his support for the USMCA:

“I am pleased to transmit legislation and supporting documents to implement the United States-Mexico-Canada Agreement (the “Agreement”). The Agreement is an important part of my Administration’s efforts to rebalance trade in North America and to modernize our trade relationship with Mexico and Canada. The Agreement will create significant new opportunities for American workers, farmers, ranchers, and businesses by opening markets in Canada and Mexico and eliminating barriers to United States goods, services, and investment. Approving this Agreement is in our national interest. I look forward to the Congress expeditiously approving the legislation.”

“Thanks to President Trump’s leadership, we have reached an historic agreement on the USMCA. After working with Republicans, Democrats, and many other stakeholders for the past two years we have created a deal that will benefit American workers, farmers, and ranchers for years to come. This will be the model for American trade deals going forward.”