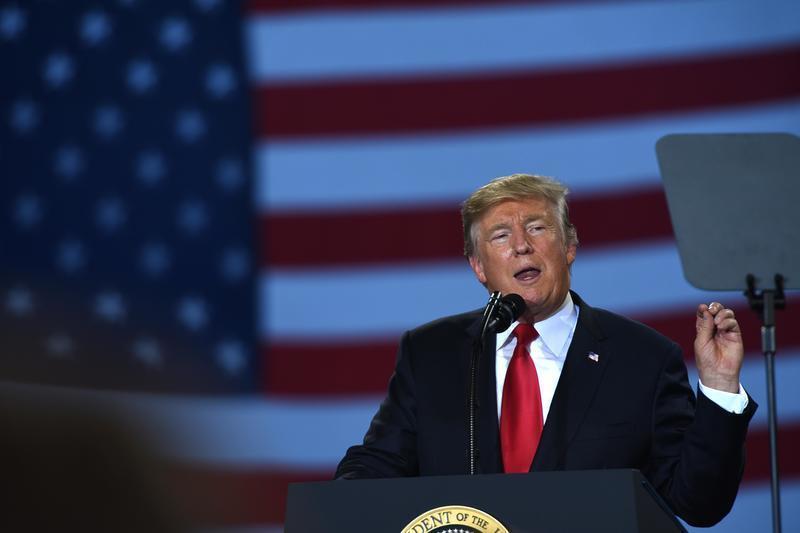 This resolution would impeach President Donald Trump for abuse of power and obstruction of Congress. On the charge of abuse of power, the resolution accuses Trump of conditioning U.S. government aid to Ukraine on its public announcement of investigations into political opponent and former Vice President Joe Biden and an allegation that Ukraine interfered in the 2016 U.S. presidential election. On the charge of obstruction of Congress, the resolution accuses Trump of ordering the White House & other executive branch entities to defy subpoenas issued by the House of Representatives pursuant to the impeachment inquiry.

The resolution continues on to say that through all of this, Trump “acted in a manner contrary to his trust as president and subversive of constitutional government, to the great prejudice of the cause of law and justice, and to the manifest injury of the people”. It also says that Trump “will remain a threat to the Constitution if allowed to remain in office” and he “warrants impeachment and trial, removal from office, and disqualification to hold and enjoy any office of honor, trust, or profit under the United States.”

As a simple resolution calling for the impeachment of a federal official, this legislation wouldn’t advance beyond the House if passed. Rather, the Senate would conduct an impeachment trial to consider the charges and a vote by two-thirds of the Senate (67 senators) would be required to convict and remove the official from office.

President Trump abused his office by conditioning foreign aid to Ukraine and a White House visit for its new president on investigations into Trump’s political opponent and then obstructing Congress’s efforts to investigate. He must be impeached, convicted, and removed from office to end the threat his misconduct poses to the future of constitutional government in the U.S.

Democrats have been working to impeach President Trump since his election and their ultimate goal is to negate his 2016 electoral victory and stop his re-election in 2020. Their efforts to impeach President Trump are based on the accusations and assumptions of unelected bureaucrats. Democrats shouldn’t pursue a partisan impeachment when we’re entering an election year.

President Donald Trump; the office of the presidency; the House of Representatives; and potentially the Senate.

This resolution would have no financial cost.

“The first article of impeachment charges President Trump with abuse of power. The article describes President Trump’s conduct and lays out two aggravating factors that we must consider: in pressuring Ukraine for a personal favor, President Trump both betrayed our national security and attempted to corrupt our elections. When the President weakens an ally who advances American security interests by fighting an American adversary, the President weakens America. And when the President demands that a foreign government investigate his domestic political rivals, he corrupts our elections. To the Founders, this kind of corruption was especially pernicious.  Free and fair elections are the bedrock of our democracy. If our elections are corrupt, everything is corrupt. The president faces a second article of impeachment for his ongoing efforts to obstruct a lawful investigation of his conduct. We have never, in the history of our nation, seen a President categorically defy Congress in this manner. If the president can first abuse his power and then stonewall all congressional requests for information, Congress cannot fulfill its duty to act as a check and balance against the Executive—and the President becomes a dictator.”

A report prepared by Republicans on the House Intelligence, Oversight, and Foreign Affairs Committees expressed opposition to Democrats’ impeachment effort:

President Donald Trump wrote a six-page letter to House Speaker Nancy Pelosi (D-CA) on the eve of the House’s planned impeachment to “express my strongest and most powerful protest against the partisan impeachment crusade”, which read in part:

“This is nothing more than an illegal, partisan attempted coup that will, based on recent sentiment, badly fail at the voting booth. You are not just after me, as President, you are after the entire Republican Party. But because of this colossal injustice, our party is more united that it has ever been before. History will judge you harshly as you proceed with this impeachment charade. Your legacy will be that of turning the House of Representatives from a revered legislative body into a Star Chamber of partisan persecution… There is far too much that needs to be done to improve the lives of our citizens. It is time for you and the highly partisan Democrats in Congress to immediately cease this impeachment fantasy and get back to work for the American People. While I have no expectation that you will do so, I write this letter to you for the purpose of history and to put my thoughts on a permanent and indelible record. One hundred years from now, when people look back at this affair, I want them to understand it, and learn from it, so that it can never happen to another President again.”

The House Judiciary Committee passed these articles of impeachment on a party-line 23-17 vote, with all Democrats in favor and all Republicans opposed.