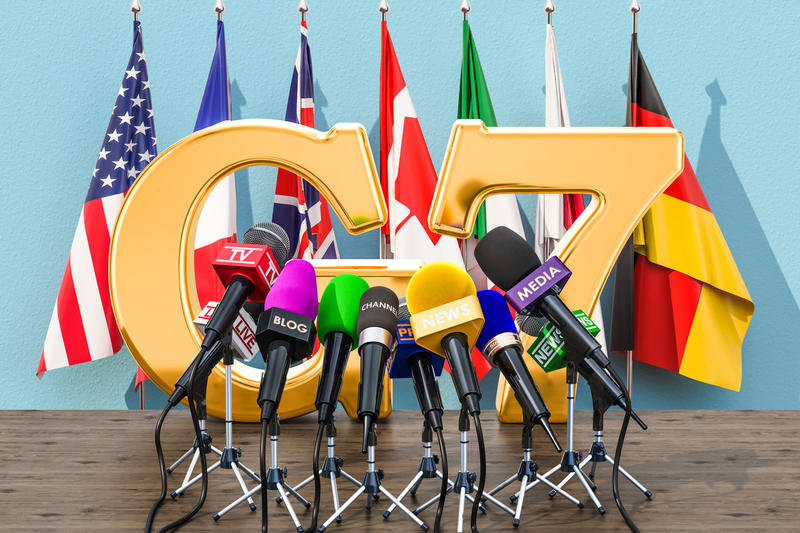 Should the House Express its Disapproval of Russia’s Inclusion in Future G-7 Summits Until its Respects Democracy & Borders? (H. Res. 546)

This resolution would disapprove of Russia’s inclusion in future Group of Seven (G-7) summits until it respects the territorial integrity of its neighbors and adheres to the standards of democratic societies. It would also reiterate support for Ukraine, condemn the Russian Federation’s actions in Crimea, reaffirm support for the Russian Federation’s suspension from the G-8, and stress that future participation hinges on respecting the territorial integrity of other nations.

As a simple resolution, this legislation wouldn’t advance beyond the House if passed.

The Russian Federation’s invasion of Crimea, aggression in Ukraine, and meddling in U.S. elections speak to a fundamental disregard for other countries’ sovereignty and democratic norms. As long as Russia fails to respect other nations’ territorial or democratic integrity, it shouldn’t be allowed to participate in the G-7, which is a meeting of the most influential nations in the world. Letting Russia back into the G-7 now, before it improves its behavior, would send the message that the world’s most influential nations will allow bad behavior to slide.

The Russian Federation — as one of the world’s largest and most important countries — should rightfully be part of the G-7 summit. Expelling Russia from the G-7 in response to its aggressive actions in Ukraine didn’t change its behavior, but did make the G-7 less effective as a meeting of the world’s most important leaders. Allowing Russia to return to the G-7 will make the summit more effective, as it’ll ensure that the G-7 summit brings all the key nations of the world together.

The House of Representatives; G-7 Summits; Ukraine; Crimea; and the Russian Federation.

In-Depth: Sponsoring Rep. Albio Sires (D-NJ) introduced this resolution to disapprove of Russia’s inclusion in future Group of Seven (G-7) summits until it respects the territorial integrity of its neighbors and adheres to the standards of democratic societies:

“Time and time again, Russia has shown it has no respect for the territorial or democratic integrity of other nations. When Russia was expelled from the Group of Eight in 2014 after its aggressive actions in Ukraine, the remaining seven nations agreed several conditions that must be met before it would be allowed to participate in future summits. Russia has not met any of the conditions but has become more aggressive in Ukraine and has undermined democracy in numerous other countries, including the United States. I want to thank my colleagues on the Committee for supporting my resolution and reiterating long-standing congressional sentiment that Russia cannot participate in G-7 summits while it continues to flout international democratic standards.”

When this resolution was marked up by the House Foreign Affairs Committee on October 30, Rep. Sires tweeted, “Russia must not be allowed to participate in the G7 while they continue to illegally occupy parts of Eastern Ukraine, destabilize the Middle East, and commit numerous human rights abuses.”

In mid-August 2019, President Trump said that it was time for Russia to be readmitted to the G-7 and suggested that President Barack Obama pushed Russia out of what was when the G-8 because he didn’t like that President Vladimir Putin had “outsmarted” him (however, it wasn’t clear what specifically Trump meant by this statement). Trump told reporters at the White House:

“I’ve gone to numerous G-7 meetings, and I guess … because Putin outsmarted him, President Obama thought it wasn’t a good thing to have Russia in. He wanted Russia out, but I think it’s much more appropriate to have Russia in and it should be the G-8.”

Trump also said, “I think it's much more appropriate to have Russia in. It should be the G-8 because a lot of the things we talk about have to do with Russia."

“Initiatives need to be outlined and handed over to Russia for consideration. At the moment, it is hard to understand what it is all about, so if the G7 wants to position itself as a serious platform, the discussion should be moved from the media field to the expert level."

This legislation passed the House Foreign Affairs Committee by unanimous consent with the support of 46 bipartisan cosponsors, including 45 Democrats and one Republican.

Of Note: Rep. Sires introduced this resolution after President Donald Trump announced his intention to invite Russian President Vladimir Putin to the 2020 G-7 summit. Russia had been expelled in 2014 as a direct result of its aggressive actions in Ukraine. President Trump’s intention to announced Russian President Vladimir Putin to the 2020 G-7 came amidst heightened Russian aggression in Ukraine and its undermining of democratic institutions around the world, including in the U.S.

Before announcing his intention to invite Putin to the 2020 G-7, Trump reportedly quarreled with other countries’ leaders at the 2018 G-7 summit in Biarritz over his insistence that Russia should return to its membership.

What is now the G-7 summit summit began in 1975 when leaders of six industrial countries met at the Chateau de Rambouillet to discuss the economic crisis. Canada joined the next year, in 1976. Finally, in 1991, the G-7 invited Mikhail Gorbachev, the last leader of the Soviet Union, to talks in London and Russia was formally admitted to the group in 1998.