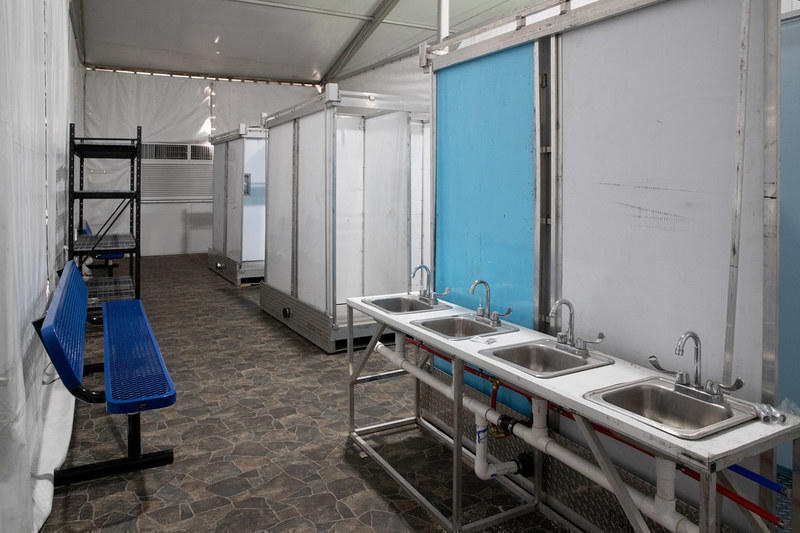 This bill — the Humanitarian Standards for Individuals in Customs and Border Protection Custody Act — would require all individuals in Customs and Border Protection (CBP) custody to receive an initial medical screening and set certain minimum standards of hygiene, nutrition, and shelter that CBP must meet. A breakdown of its various provisions can be found below.

Specifically, this bill calls on the CBP to:

It would also require CBP to conduct health screenings with translators less than 12 hours after migrant adults are initially detained. For those considered more vulnerable (including children, the elderly, pregnant women, and those with serious medical conditions such as HIV), these screenings would be required under three hours after the initial detainment. The health screenings would include an interview with the migrant, a psychological exam and screenings for vital signs like pulse, temperature, blood pressure, and oxygen levels.

Additionally, CBP would need to ensure that victims of assault and sexual abuse receive psychological care and that the physical and mental health of LGBTQ migrants is protected.

Customs and Border Protection’s migrant detention facilities aren’t meeting minimum hygiene, nutrition and shelter standards. This is making detainees sick — and in 10 cases so far, has led to death. By setting standards for CBP facilities, this bill would help ensure migrants’ physical and mental health.

Customs and Border Protection already has its own guidelines that set standards for its facilities and the best way to improve conditions is to ensure compliance with existing standards, rather than increasing standards for an already heavily burdened agency. Most CBP agents do all they can, but the immigration system is simply overwhelmed.

In-Depth: Rep. Raul Ruiz (D-CA) introduced this bill to require medical screenings for all individuals in CBP custody and set minimum hygiene, nutrition and shelter standards at CBP facilities that “are consistent with the humanitarian principles that ensure the basic conditions for a life with dignity.” In a press release upon introducing this bill, Rep. Ruiz said:

“The border patrol facility I saw in Lordsburg was under-staffed, underequipped, and unprepared to care for the people in its custody – particularly children. This legislation makes crystal clear that the United States has a responsibility to meet basic humanitarian standards of care for individuals in our custody. We must address the real crisis at our border – one that has already taken the lives of two young children – and recognize the essential human dignity of all people. I am confident that the steps identified in this resolution will help save children’s lives.”

"Treating individuals in CBP custody with basic standards of human decency is the very least that we can do, and it is outrageous that this Administration needs Congress to act before it will do the right thing. We have been confronted with the images of too many children and families squeezed into overcrowded and unsanitary CBP facilities, making us all witnesses to the suffering and deaths of these individuals being held by the U.S. government.There is nothing we can do to bring them back, but we can help make certain that no other child or parent in CBP custody dies for lack of an appropriate medical screening or access to medical care. I commend Congressman Ruiz for his tireless work in introducing the Humanitarian Standards for Individuals in CBP Custody Act, and am proud to send this critical bill to the full House for passage."

“As administration officials have been saying for months, the current migration flow and resulting humanitarian crisis has overwhelmed the government’s ability to adequately respond… With the undeniable evidence of this crisis now firmly in the public spotlight, I was hopeful we would finally see a serious effort by Democrats to end the crisis. Instead, they have decided to markup H.R. 3239, a bill that will do absolutely nothing to address the root causes of the crisis, and, in fact, will make it worse. As the system was intended to work, individuals encountered by Customs and Border Protection (CBP) remain in CBP custody for short periods of time to complete processing, generally no more than 72 hours. Those individuals are then transferred—adults enter Immigration and Customs Enforcement (ICE) custody, family units are released into American communities, and children are entrusted to Health and Human Services (HHS) care. The enormous and unprecedented numbers of migrants crossing, however, has overwhelmed the system. ICE detention and HHS shelters are full. CBP is forced to release virtually all family units as soon as the processing stage is completed. In short, what administration officials have been warning of has come true — the system has broken — but, are we marking up a bill to fix legal loopholes incentivizing mass illegal migration? No. We are marking up the ‘Humanitarian Standards for Individuals in Customs and Border Protection Custody Act,’ a bill with a nice name, but that is actually unworkable. It would significantly and severely impact CBP, but my colleagues haven’t bothered to talk to the agency about its effects.”

Rep. Collins continued, arguing that while CBP should comply with its custodial care requirements, this bill would create burdensome additional medical care requirements that would overwhelm the agency’s already-stretched resources beyond what’s reasonable:

“To be clear, CBP should comply with the custodial care requirements set out in their Transducer Electronic Data Sheets standards and should treat all detainees with respect. How is the one-size-fits-all approach of this bill completely unworkable? The requirements of H.R. 3239 apply to hundreds of CBP facilities — no matter how big or small, urban or remote, or even how busy or idle. For instance, even though my colleagues keep offering anecdotes from along the southern border, this bill would apply to a very busy airport like Hartsfield Jackson, which sees millions of passengers a year; or an extremely remote port of entry like at Poker Creek, Alaska, which is only open for a few months each year; or a Border Patrol substation like Big Bend, Texas, which normally houses no more than 10 detainees per day; or an isolated forward operating base like Camp Bounds, Arizona; or a seaport like Port Ferry, Washington; or even the Truth or Consequences Border Patrol checkpoint in New Mexico. Am I making my point? As the men and women of CBP are doing everything they possibly can to confront the crisis, H.R. 3239 would impose burdensome and often impossible standards of care onto those facilities. In addition to an initial medical screening of all migrants entering CBP custody, H.R. 3239 would require CBP to provide additional, free — for the alien — medical services. The bill states, where practicable, CBP shall have on site, in addition to licensed medical professionals they already have to conduct medical screenings, ‘licensed emergency care professionals, specialty physicians (including physicians specializing in pediatrics, family medicine, obstetrics and gynecology, geriatric medicine, internal medicine, and infectious diseases), nurse practitioners, other nurses, physician assistants, licensed social workers, mental health professionals, public health professionals, dieticians, interpreters, and chaperones.’ If impracticable to have them onsite, CBP must have them on call. Our Border Patrol should be out interdicting narcotics, preventing illegal immigration and stopping child trafficking, not setting up full-service hospitals at every single facility."

Finally, Rep. Collins argued that this bill would cripple CBP’s ability to respond to increases in migration to the U.S. and allow smugglers to use children as a “loophole” to allow adults entry into the U.S. as adult relatives of minors:

“The bill would also prevent CBP from housing individuals outside in temporary facilities, and require all facilities to be climate controlled, while simultaneously limiting the number of people a CBP processing facility can house. CBP will therefore be forced to release even more people into the U.S. interior, since this bill would limit its ability to respond to migrant surges. The bill also mandates the provision of private shower facilities, which may not be appropriate in a custodial setting, and it even mandates — I kid you not — a gender-specific toilet-to-detainee ratio. Perhaps the worst part about this bill is it increases the incentive to exploit children to gain entry into the United States. Smugglers know migrants will be released into the U.S. interior if they bring a child, because of a legal loophole created by the Flores settlement agreement. The loophole currently only applies to parents or legal guardians. DHS continues to see adults fraudulently posing as a child’s parent or legal guardian, to use the child as a ‘passport’ into the United States. This bill rips the existing loophole open even further. Instead of only benefiting parents and legal guardians, this bill would extend it to mere ‘adult relatives’ of a child. H.R. 3239 is unworkable, will do nothing to address the border crisis and increases the likelihood children will be trafficked. I urge my colleagues to oppose this misguided, dangerous bill.”

This bill passed the House Judiciary Committee by an 18-13 vote with the support of 153 Democratic House cosponsors. Its Senate companion, sponsored by Sen. Tom Udall (D-NM) with two Democratic Senate cosponsors, has not yet seen committee action.

Of Note: Apprehensions at the Southern border of unauthorized immigrants and asylum-seekers have spiked in the last year, with May 2019 marking the highest monthly total since 2006 at 132,880 apprehensions. Of those detained, the proportion of family units and unaccompanied minors are at all-time highs, burdening a detention system designed for single males who historically made up the vast majority of those apprehended at the Southern border.

After it became apparent that DHS accounts funding detention facilities would run out of money before the end of the fiscal year, Congress passed a bipartisan $4.59 billion emergency funding package to provide for additional facilities to prevent overcrowding, provide basic necessities and healthcare to detained migrants, and speed up the processing of immigration cases. President Trump signed it into law on June 30th

This bill is a response to the Trump administration’s emphasis on putting unauthorized immigrants in detention centers. However, the facilities in question and their condition are merely continuations of policies that existed in previous administrations, including the Obama administration which faced a similar spike in apprehensions of unaccompanied minors. In a July 2019 News Hour interview with Judy Woodruff, former DHS Secretary Jeh Johnson — who held that position in the Obama administration — explained, “[F]irst, the reality for these migrants, for these people from Central America is worse. It's worse in Central America.” Johnson attributed poor conditions in facilities to the increased migration numbers, rather than to malicious intent by the Trump administration.

To date, 10 people (including three children and seven adults) have died in CBP custody over the past nine months, some of whom required medical care.

Nationally, there are over 200 immigrant detention facilities, with a record-high 49,000 beds (bed capacity was a point of contention in the bipartisan spending agreement to avoid a government shutdown in February 2019). Allegations of overcrowding, poor conditions, human rights violations, inadequate health services, usage of slave labor and abuse of solitary confinement have been levied against many of these facilities by advocates, detainees, and human rights watchdog groups.

Leah Chavla, an international human rights lawyer and policy adviser at the Women's Refugee Commission, has previously noted that CBP has its own guidelines in place governing the conditions and resources it has to provide to children and other migrants in the agency’s custody. However, these guidelines aren’t binding. With this in mind, Chavla has previously said that “[i]t’s important to have a critical look at what’s going on and how the guidelines can be made binding.”