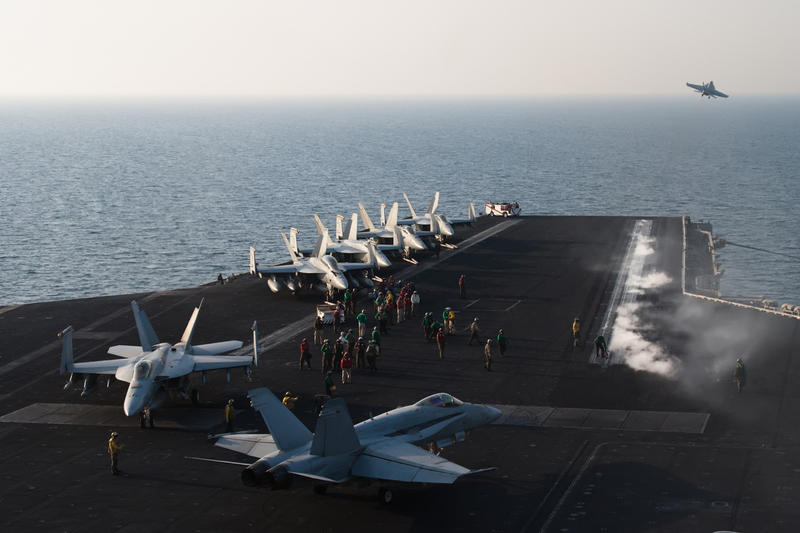 This “minibus” spending bill would provide a total of $982.9 billion in fiscal year 2020 appropriations for Defense, Labor-Health and Human Services-Education, Defense, State-Foreign Operations, and Energy and Water Development. A breakdown of this 667 page bill’s provisions can be found below.

This section of the bill would provide $690 billion in FY2020 for the Dept. of Defense (DOD). Of the total, the base budget is $622.1 billion (an increase of $15.6 billion) while $68.1 billion is provided for Overseas Contingency Operations (OCO) / Global War on Terrorism (GWOT). A detailed breakdown of where that funding would go can be found below.

Military Personnel & Pay: This section would provide $153.9 billion to fund an Active Duty end strength of 1,337,500 servicemembers and a Selected Reserve end strength of 800,800 for FY2020 — which would represent a decrease of 16,900 from the prior year. A military pay raise of 3.1% would be funded by this bill.

Operations & Maintenance: This section would provide $206.7 billion in base budget funding and $49.8 billion in OCO/GWOT funding, including:

HHS: This section would provide $99.4 billion in discretionary FY2020 funding for HHS, an increase of $8.9 billion from the prior year.

National Institutes of Health (NIH): The NIH would receive $41.1 billion, an increase of $2 billion from the prior year, including:

Other institutes and centers under HHS would see their funding increase relative to the prior year under this bill, which would provide:

DEPT. OF EDUCATION: This section would provide $75.9 billion in FY2020 discretionary funding for the Dept. of Education, an increase of $4.5 billion above the prior year.

Title I Grants to Local Educational Agencies: $16.9 billion, an increase of $1 billion, would be provided for grants to school districts and schools with a high percentage of low-income students to help all students succeed and meet challenging academic standards.

Title IV Student Support and Academic Enrichment Grants: $1.3 billion, an increase of $150 million, would be provided to support activities aimed at giving students a well-rounded education, including STEM education, computer science, and the use of technology to improve instruction. Grants would also go to ensuring safe and supportive learning environments and responding to school violence.

IDEA Grants to States: $14.5 billion, an increase of $1.05 billion, would go to grants for states to support special education services for children with disabilities, including grants for infants and families and children in preschool.

Pell Grants: The maximum Pell grant award would be increased to $6,345 — an increase of $150 — while funding would be provided to support the Year Round Pell.

DEPT. OF LABOR: This section of the bill would provide $13.3 billion to the Dept. of Labor, an increase of $1.2 billion from the prior year.

Workforce Training Programs: A total of $3 billion would be distributed by formula to states and localities to meet each state’s unique job training and reemployment needs, an increase of $178 million from the prior year.

Job Corps: $1.9 billion would be provided to support Job Corps, an increase of $150 million. Jo Corps is the nation’s largest career technical training and educational program for at-risk youth and has centers in all states, D.C., and Puerto Rico.

STATE & FOREIGN OPERATIONS: This section of the bill would provide $56.4 billion in FY2020 funding for the State Department — an increase of $2.2 billion from the prior year — to carry out diplomacy, promote democracy, provide assistance to allies, and global health programs to help the world’s most vulnerable populations. A breakdown of its various provisions can be found below.

Multilateral assistance would total $2.338 billion, an increase of $482 million, to meet U.S. commitments to international financial institutions and assessed contributions for U.N.  organizations and peacekeeping activities. Funding for family planning would be increased by $175 million from the prior year.

Global Health: This section would provide a total of $9.3 billion in FY2020 funding for global health programs, of which $5.93 billion for the State Department (including PEPFAR).

International Security Assistance: This section of the bill would provide $11.2 billion in FY2020 funding (an increase of $2 billion) for counterterrorism and nonproliferation programs, foreign military training and education programs, peacekeeping operations, plus military equipment for U.S. partners. It’d include:

This section of the bill would provide $46.4 billion in funding for FY2020 energy and water programs, an increase of $1.8 billion from the year prior.

Nuclear Security: Funding would total $15.9 billion, up $665 million from the prior year. This would include: $11.7 billion for nuclear weapon safety and readiness; and $2 billion for maintaining naval nuclear reactors on aircraft carriers and submarines.

Energy Programs: A total of $13.5 billion would be provided, up $554 million above the prior year, increases energy research toward an “all-of-above” solution to American energy independence.

Additionally, this section would provide:

No bill is perfect, but this bill contains funding for many bipartisan priorities. It also advances progressive priorities like ending the so-called “global gag rule” that banned foreign aid dollars from going to groups that provide abortions overseas, and allowing “Dreamers” who were brought to the U.S. illegally as children to work for the federal government. Members of Congress need bigger office budgets to do their job effectively.

Congress shouldn’t cram nearly $1 trillion in spending that would ordinarily be broken out into five bills into one package. This bill (which is subject to a veto threat) contains “poison pill” riders that continue the Hyde Amendment’s restrictions on federal funding for abortions domestically, allow foreign aid to go to groups that provide abortions overseas, and prevent the use of funds to build the border wall. Also, lawmakers shouldn’t vote to give themselves a raise.

The CBO estimates that enacting this bill would cost $988.6 billion in fiscal year 2020.

The five individual appropriations bills that are bundled into this minibus passed the Appropriations Committee on the following votes:

House Democrats amended this bill to remove the Legislative Branch provisions (which passed the committee on a party-line 28-22 vote) after lawmakers on both sides of the aisle expressed concern with provisions increasing members' congressional office budget because of the political optics of voting to give themselves a raise.

The White House announced that President Donald Trump would veto this bill if it were to reach his desk:

"The Administration is strongly opposed to the budgetary framework that underlies this and other appropriations bills being considered by the House of Representatives. This framework would raise the discretionary spending caps by more than $350 billion in fiscal years (FY) 2020 and 2021 and does not reflect either a House-passed budget resolution or a bipartisan, bicameral agreement. It would put the Federal Government on track to add nearly $2 trillion to deficits over 10 years, adding significantly to the national debt, which is already more than $22 trillion and rising."