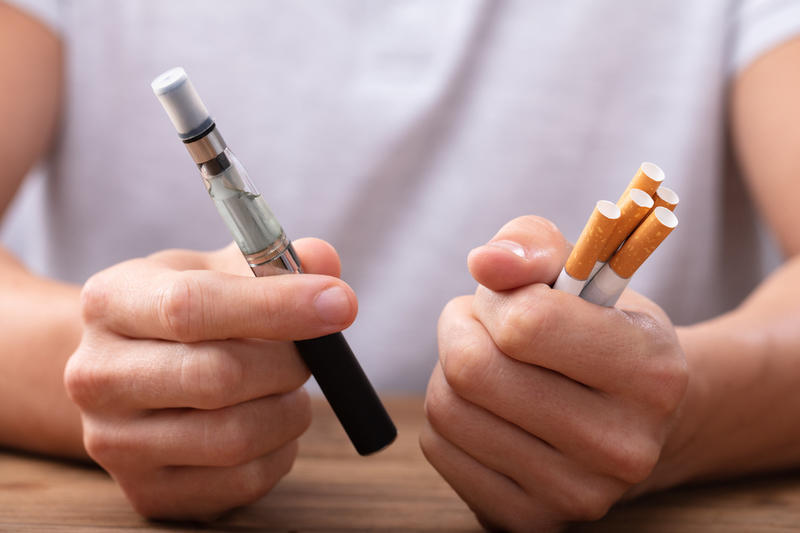 This bill — the Protecting American Lungs and Reversing the Youth Tobacco Epidemic Act of 2020  — would impose a number of restrictions on tobacco products & sales (including vaping products), increase tobacco & nicotine taxes, and ban flavored tobacco products. It consolidates provisions from four bills into this one piece of legislation, a breakdown of which can be found below.

This section would revise requirements related to the safety, sale, and advertisement of tobacco products, including electronic nicotine delivery systems such as e-cigarettes, e-hookahs, e-cigars, and vape pens. It would also:

This section would impose an excise tax on “taxable nicotine” — which is nicotine that has been extracted, concentrated, or synthesized and is treated as a tobacco product. The tax wouldn’t apply to nicotine used in a product that has been approved by the FDA for sale as a nicotine replacement therapy.

This section would waive Medicare coinsurance requirements for colorectal cancer screening tests, regardless of the code billed for a resulting diagnosis or procedure.

Raising taxes on tobacco products will discourage their use and improve public health. Flavored vaping products entice children to try them and they end up getting addicted, so banning them outright will prevent that from happening.

This bill combines too many issues into one piece of legislation and shortchanges the ability to have a serious debate on the merits of contentious issues, including an increase in tobacco taxes and banning flavored vaping products.

People who use tobacco or vaping products; people with high-deductible health plans who use inhalers; people on Medicare undergoing colorectal cancer screening; and the FDA.

The CBO estimates that enacting this bill would decrease the deficit by $364 million over the 2020-2030 period, as increased spending would be more than offset by increased tax revenues.

“The Reversing the Youth Tobacco Epidemic Act makes clear that we will not tolerate the proliferation of slick new products purposefully designed to appeal to young people to get them addicted to nicotine and tobacco. Congress must act to reduce youth nicotine addiction by making it clear that selling tobacco products to kids is illegal. My legislation also treats e-cigarettes and other tobacco products the same as traditional cigarettes under the law. We cannot afford to wait — we are on the cusp of losing an entirely new generation to a lifetime of nicotine addiction.”

“Reducing youth tobacco use is a shared goal of both Republicans and Democrats. A surge in the use of e-cigarettes has resulted in a dramatic increase in tobacco utilization by minors in recent years. To combat this epidemic, Republicans put forth policy proposals such as “T21” — a federal prohibition on the sale and marketing of tobacco products to those under 21 years of age. The Administration also explored limiting the sale of electronic nicotine delivery systems (ENDS) to age restricted locations. Both policies aim to address the issue of “social sourcing” — when of-age high school students buy and resell tobacco products to their younger classmates. This is known to be a primary method through which minors have been acquiring ENDS products… But H.R. 2339, the legislation considered before the Energy and Commerce Committee in November, goes well beyond the issue of youth vaping and takes aim at the entire tobacco industry, including products used legally by adults.”

“When I was Nassau County Executive, one of my top priorities was addressing our nation’s smoking epidemic. Now as a Member of Congress, I’m terrified by the number of teenagers who are becoming addicted to nicotine because they vape. Increasing the cost of vaping will have a direct correlation to decreasing the usage of vaping products. In New York State, we have the highest cigarette taxes in the country, and as a result our smoking and cancer rates are some of the lowest in the country.”

House Ways and Means Committee Ranking Member Kevin Brady (R-TX) criticized Democrats for rushing this bill to the floor without a hearing and explained the opposition to this bill in its committee report:

“Clearly, there is bipartisan concern on this Committee about the dangers of vaping, especially among our youth. Many of us are parents. All of us represent communities that have been touched in some way by this issue. And none of us wants to see a single person hurt, injured, or worse by vaping.That is a solid foundation on which to begin a serious discussion about vaping, but this process — or lack thereof — has robbed us of that important discussion… This Committee should take its constitutional taxing power seriously. Sadly, rushing through a bill with two days’ notice and not a single hearing does not serve this Committee, or more importantly, the people we’re trying to help. It is time to start over and do this right. This issue is too important for us to do less.

The Trump administration released a statement of administration policy threatening that the president would veto this bill if it reached his desk, and explained in part:

"The Administration cannot support H.R. 2339's counterproductive efforts to restrict access to products that may provide a less harmful alternative to millions of adults who smoke combustible cigarettes. This includes the bill's prohibition of menthol e-liquids, which available evidence indicates are used relatively rarely by youth. It also includes the bill's approach to remote retail sales. At this time, problems surrounding such sales should be addressed through the application of age verification technologies rather than, as this bill would do, prohibiting such sales entirely."

Here’s a rundown of how the bills that comprise this package fared in committee and their cosponsors:

Of Note: E-cigarette use by middle and high school-aged youths has increased markedly in recent years. Centers for Disease Control & Prevention (CDC) data compiled by USAFacts shows that the percentage of 6th through 12th graders who reported using an e-cigarette in their lifetime increased from about 8% in 2013 to 25% in 2018, with 14% reporting they used an e-cigarette within the last 30 days.