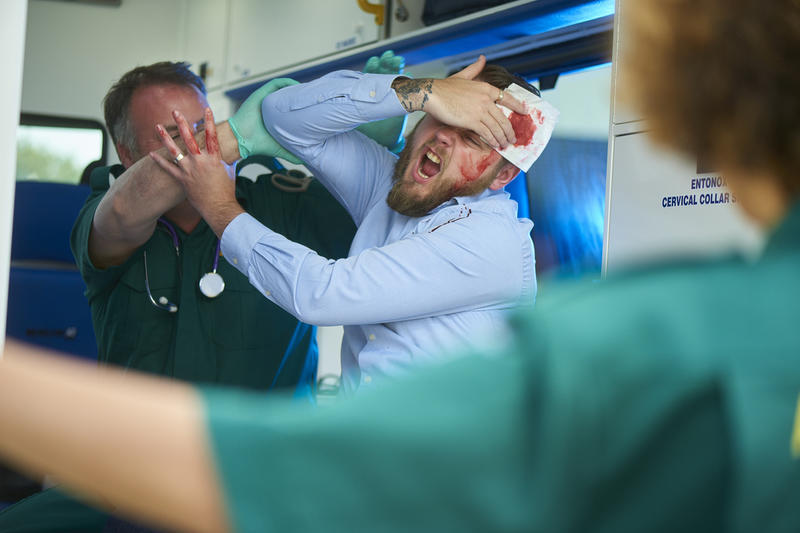 This bill would direct the Occupational Safety and Health Administration (OSHA) to issue a standard requiring healthcare and social service employers to write and implement a workplace violence prevention plan to prevent and protect employees from violent incidents in the workplace. Compliance with the new standard would be required for hospitals and skilled nursing facilities as a condition of their Medicare provider agreements.

This bill would also set minimum requirements for a workplace safety standard and for employers’ workplace violence prevention plans. Those requirements would include: unit-specific assessments and implementation of prevention measures, including physical changes to the environment; staffing for patient care and security; employee involvement in all steps of the plan; hands-on training; robust recordkeeping requirements, including a violent incident log; and protections for employees who report workplace violence to their employer and law enforcement.

An amendment made to this bill during its committee markup made two major changes to it:

This legislation would cover a wide variety of workplaces, including: hospitals, residential treatment facilities, non-residential treatment settings, medical treatment or social service settings in correctional or detention facilities, psychiatric treatment facilities, substance use disorder treatment centers, community care settings such as group homes and mental health clinics, and federal healthcare facilities such as those operated by the Veterans Administration (VA) and the Indian Health Service (IHS). It would also cover field work settings, such as home care and home-based hospice, and emergency services and transport services.

For the purposes of this bill, “workplace violence” means the threat or use of physical force against an employee, regardless of whether an injury is sustained.

Workplace violence is a growing problem in the healthcare and social service industries that puts workers, healthcare outcomes, and healthcare facility security at risk. OSHA had previously agreed to rulemaking to address this problem, but progress on this issue has stalled under the Trump administration. In the absence of rulemaking momentum at OSHA, Congress needs to step in to legislate on this issue.

While no one denies that workplace violence against healthcare and social service workers is a problem, the process by which this bill has been drafted is flawed. The opposition of the American Hospital Association (AHA), which represents hospitals and healthcare networks and notes that hospitals already have stringent safety precautions in place, should give lawmakers pause as its members are key stakeholders in this issue.

“Health care and social service workers face a disproportionate amount of violence at work, and the data shows that these incidents are on the rise. Safety experts, employees, and Members of Congress have been pressing OSHA to address this outsized risk of violence for years, but have seen no meaningful action. This legislation is the result of a five-year process to build the foundation for long overdue change to protect America’s caring professions, and would require OSHA to issue a Workplace Violence Prevention Standard, giving workers the security that their employers are implementing proven practices to reduce the risk of violence on the job. With the Committee’s announcement just yesterday of a hearing next week on protecting health care and social workers from workplace violence, we can be assured that this bill is finally poised to move, and not just sit on the shelf.”

Original cosponsor Rep. Alma Adams (D-NC) adds that thousands of workers are killed or injured on the job each year:

“Every year, more than 850 workers are killed on the job and another 28,000 suffer serious injury. The Workplace Violence Prevention and Social Services Workers Act sends the message that ‘enough is enough’ — setting a national standard that forces employers to take seriously the health and safety of American workers. I am proud to stand with Rep. Courtney and Chairman Scott in support of this effort, and look forward to its consideration by the House.”

The American Federation of Teachers supports this bill. Its president, Randi Weingarten, says:

“Our nurses and health industry workers care every day for the sick, the elderly and the mentally ill, yet they often feel unsafe or unprotected themselves from the assaults that occur in hospitals and other healthcare-related settings. While the Occupational Safety and Health Administration has left these workers vulnerable, incidents of workplace violence continue to rise with 69 percent of reported cases occurring in healthcare settings. Thankfully, this bill addresses this increasing trend head-on and provides long-needed protections and specific and enforceable safety standards for people who work in front-line healthcare jobs.”

“As nurses who work at the bedside, our union has seen violence reach epidemic proportions in our hospitals and clinics. Employers’ failure to prevent violence not only harms nurses and other healthcare workers, but it harms our patients too.  That’s why our union fought for—and won—a landmark workplace violence prevention standard in California and why we applaud Rep. Courtney for moving forward legislation to create comprehensive federal protections for nurses and other healthcare professionals against violence on the job. We know that violence can be prevented when employers establish plans that are tailored to fit the risks at each workplace and each patient care unit with the input of nurses and other workers at the bedside.”

During this bill’s committee hearing, Reps. Phil Roe (R-TN) and Virginia Foxx (R-NC) raised concerns about circumventing OSHA’s normal rulemaking process. Rep. Roe shared an American Hospital Association (AHA) statement opposing this bill. In its statement, the AHA cited concerns about this bill potentially creating duplicate anti-workplace violence measures for health care facilities that already have such measures in place and allowing only limited opportunity for the public and stakeholders to review and comment on this bill. In a June 10, 2019 letter, AHA Executive Vice President Thomas P. Nickels wrote:

“America’s hospitals and health systems are committed to a culture of safety for every worker, patient and family member who enters our facilities. However, because hospitals have already implemented specifically tailored policies and programs to address workplace violence, we do not believe that the OSHA standards required by H.R. 1309 are warranted, nor do we support an expedited approach that would deny the public the opportunity to review and comment on proposed regulations.”

For himself, Rep. Roe said:

“No one is more interested in having a safe workplace more than the hospitals. What’s the hurry? Why don’t we do this in a bipartisan way? We could have the American Hospital Association in to testify and see what their issues are. That’s what I would recommend.”

Rep. Foxx added that this bill is a “rush to judgment”:

“Health care workers are familiar with the Hippocratic Oath: ‘First do no harm.’ In its rush to judgment, H.R. 1309 does great harm by short-circuiting the public input process and prescribing a specific end result from the beginning.”

Last Congress, this legislation had 23 Democratic House cosponsors and didn’t receive a committee vote. It didn’t have a Senate companion in the 115th Congress.

Of Note: According to a 2016 Government Accountability Office (GAO) report, rates of violence against healthcare workers are up to 12 times higher than rates of violence against workers overall. Additionally, in 2016, 70% of nonfatal workplace assaults were against workers in the health care and social assistance sectors. In 2016, a comprehensive review published in the New England Journal of Medicine, “Workplace Violence Against Health Care Workers in the United States,” found that although healthcare and social service sector workers account for only 12.2% of the workforce, they account for nearly 75% of workplace assaults.

In its 2016 report, the GAO observed that because relatively few studies on workplace violence prevention programs’ effectiveness have been conducted, it’s hard to know how effective they are. However, in a literature review of five studies, the GAO found that four of the five studies suggested that workplace violence prevention programs can contribute to reduced rates of assault.

OSHA — the federal agency responsible for protecting workers’ health and safety — currently doesn’t require employers to implement workplace violence prevention programs. However, it does provide voluntary guidelines, and can cite employers for failing to provide a workplace free from recognized serious harms.

In recent years, OSHA has agreed to undergo rulemaking on healthcare workplace violence. However, action on this has stalled under the Trump administration.