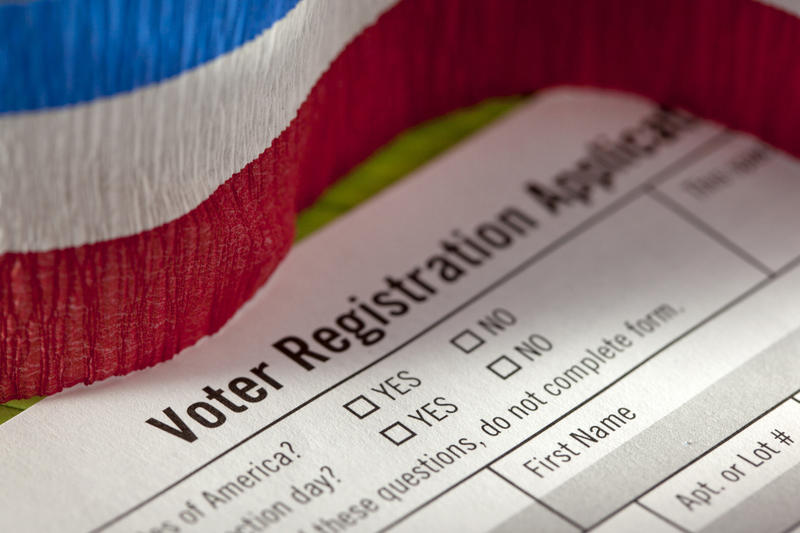 Should People be Automatically Registered to Vote at the DMV? (H.R. 645)

This bill would require state motor vehicle authorities (MVAs) to transmit certain identifying information of an individual requesting MVA services to the appropriate state election official so that the individual can be automatically registered to vote.

State election officials would then be directed to notify the individual that unless they opt out within 21 calendar days of the notice, they will be automatically registered to vote unless:

A state may not use any identifying information regarding an individual’s citizenship status for any purpose other than determining whether the individual is eligible to vote in federal elections.

This bill would include a "loopback provision" that'd require state election officials to apply its registration provisions to all voting-eligible citizens who obtained services from motor vehicle registries up to two years prior to this bill's enactment.

This bill would apply to all 50 U.S. states, the District of Columbia, and U.S. territories.

Automatically registering eligible voters when they visit a DMV makes the registration process effortless for voters, which in turn will increase turnout.

Americans who want to vote are perfectly capable of registering to vote on their own. States don't need to do it for them whenever they go to the DMV.

All Americans who visit a state MVA and would be automatically registered to vote; state motor vehicle authorities; and state election officials.

In-Depth: This bill is part of the Democrats' For the People Act, sponsored by Rep. John Sarbanes (D-MD). When the For the People Act was introduced in January 2019, this bill's original author, Rep. Cicilline (D-RI) said:

“Under Republican rule, the system has been rigged against working people. The American people are sick and tired of corruption and mismanagement in Washington. That’s why they gave Democrats a majority in the U.S. House – to clean up the mess. I’m excited that our first order of business is to fix what’s wrong in our political system. I thank Congressman Sarbanes for his leadership. I look forward to working with him to pass this bill and send it to the Senate.”

There is nothing more essential to our democracy than the right to vote.  It is indeed, the very basic tenet of self-government. Yet, in 2016, at least 32.6 million eligible Americans were not registered to vote, and thus unable to cast a ballot. The expansion of voting rights is a top priority in the 116th Congress... According to the Federal Highway Administration, approximately 87 percent of driving age Americans possess a driver’s license, and 89 percent of Americans possess a government issued ID according to the Brennan Center for Justice at New York University School of Law.  The Automatic Voter Registration Act would require state motor vehicle registries to submit identifying information of individuals who obtain services from the registry to the state’s election official, who will automatically register all eligible individuals to vote in federal elections.  This bill would provide individuals with the opportunity to opt out of having their names added to voter lists, and would ensure that any and all information that is shared with election officials is used solely for the purpose of determining an individual’s eligibility to vote."

"As Chair of the DPCC and as Vice Chair of the Democracy Reform Task Force, David Cicilline has been a crucial partner in developing H.R. 1, the For the People Act – a once-in-a-generation opportunity to clean up Washington and return to government of, by and for the people. His leadership on reform issues – especially when it comes automatic voter registration and campaign finance transparency and disclosure – is a key reason why we’ve been able to present the American people with such a robust and sweeping set of reforms to end the dominance of big money in politics, make public officials actually serve the public, and make it easier, not harder, to vote.”

Last Congress, Rep. Cicilline (D-RI) introduced this bill from the 114th Congress to significantly increase the number of registered voters by requiring states to automatically register eligible voters unless the voter opts out. He offered the following statement when introducing this bill's predecessor in the 114th Congress:

“Today, too many politicians are trying to make it harder than ever for citizens to make their voices heard at the ballot box. The Automatic Voter Registration Act will protect the right to vote and expand access for eligible voters across the United States. I thank my colleagues who have co-sponsored this important legislation that helps to expand one of our most essential rights as Americans.”

Automatic voter registration's proponents argue that it removes barriers to registration for eligible voters, thereby eliminating one of the first barriers to voter participation. By registering through a routine and necessary transaction, voters won't have to worry about registration deadlines or application submissions — they are, in a sense, "automatically enfranchised."

Of Note: Since the National Voter Registration Act's (commonly referred to as "Motor Voter") passage in 1993, federal law has required motor vehicle agencies in 44 states and the District of Columbia to provide voter registration services to eligible citizens.