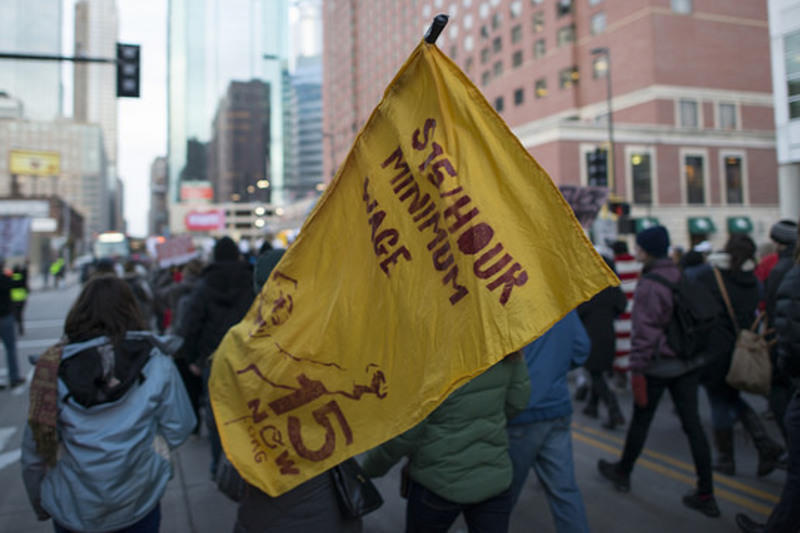 Specifically, the federal minimum wage would be increased to the following levels:

The current federal minimum wage of $7.25 an hour isn’t a living wage and needs to be increased over five years to $15 an hour so that all workers — regardless of what they do for employment — are able to make a good living. Exceptions to the minimum wage, such as the subminimum wage for tipped workers, should be eliminated to put all workers on an even footing.

It’s basic economics that raising the cost of labor will cause employers to hire fewer workers or automate those jobs. Hiking the federal minimum wage to $15 an hour would have disastrous consequences for workers in jobs that can be automated and for younger workers who’d lose vital opportunities to gain experience in minimum wage jobs that won’t be available to them.

In-Depth: Rep. Bobby Scott (D-VA), chairman of the House Committee on Education and Labor, reintroduced this bill from the 115th Congress to gradually raise the minimum wage to $15 in 2024, index future minimum wage increases to median wage growth, and ensure that all workers are paid at least the full federal minimum wage by phasing out subminimum wages for tipped workers, youth workers, and workers with disabilities:

“No person working full-time in America should be living in poverty. The Raise the Wage Act will increase the pay and standard of living for nearly 40 million workers across this country. Raising the minimum wage is not only good for workers, it is good for businesses, and good for the economy. When we put money in the pockets of American workers, they will spend that money in their communities. This bill is a stimulus for Main Street America.”

Sen. Bernie Sanders (I-VT), who introduced a companion bill in the Senate with 31 cosponsors, added that it’s “not a radical idea” to say that a job should lift a worker out of poverty:

“Just a few short years ago, we were told that raising the minimum wage to $15 an hour was ‘radical.’ But a grassroots movement of millions of workers throughout this country refused to take ‘no’ for an answer. It is not a radical idea to say a job should lift you out of poverty, not keep you in it. The current $7.25 an hour federal minimum wage is a starvation wage. It must be increased to a living wage of $15 an hour.”

House Speaker Rep. Nancy Pelosi (D-CA), who supports this bill, added that a $15 minimum wage affirms the “bedrock idea of fairness” in America:

“A $15 federal minimum wage affirms the bedrock idea of fairness in our country: that hard work deserves a decent wage. We will open up opportunities for working families and drive economic growth that lifts up all communities – because our economy works best when it works for everyone, not just the wealthy and privileged few.”

“For a long time, Democrats have been trying to raise the minimum wage to keep pace with the times. The harsh truth of the matter is that the minimum wage is now a poverty wage in too many parts of America. And no American with a full-time job should be living in poverty. Despite campaigning as a champion for working Americans, President Trump has abandoned working Americans while in office. He’s tried to strip away workers’ health care, given a massive tax cut to corporations and the wealthy, and used workers as bargaining chips in shutting the government down. If President Trump isn’t going to stick up for American workers on key issues such as raising the minimum wage, Democrats will.”

The Service Employees International Union (SEIU) is one of a number of labor unions that supports this bill. SEIU’s president, Mary Kay Henry, says:

"Everyone who works—no matter where they are from or what the color of their skin is—deserves to be paid enough to lead a decent life and provide for their family, and that's what a $15 minimum wage will do."

Multiple prominent economists have come out in opposition to a $15 federal minimum wage. Alan Krueger, former chairman of President Obama’s Council of Economic Advisors, called a $15 minimum wage “a risk not worth taking” that’d “put [the U.S.] in uncharted waters, and risk undesirable and unintended consequences.” Similarly, Clinton administration economist Harry Holzer cautioned that a $15 minimum wage would be “extremely risky,” particularly for younger and less-educated workers who need to gain work experience.

Rachel Greszler, a research fellow in economics, budget and entitlements for the Heritage Foundation, points out that a $15 federal minimum wage isn’t the only policy that’d increase wage, particularly for low-income workers:

“Congress could enact universal savings accounts and eliminate double taxation on savings to help increase investment and make workers more productive. Policymakers could also reduce unnecessary regulations on employers that drive up their costs and leave them with fewer resources to compensate their employees. And finally, Congress could rein in unsustainable government spending so that younger workers and future generations do not face the prospect of government taking more than half of their wages to help pay for the irresponsible largesse of past and current lawmakers.”

The U.S. Chamber of Commerce — a traditionally Republican-aligned pro-business group — also opposes a $15 federal minimum wage. Marc Freedman, vice president of employment policy at the Chamber of Commerce, argues that many businesses “do not have the ability to absorb an increase in their labor costs" to $15 per hour, which he characterizes as a “dramatic escalation.” Like Kudlow, Freedman argues that small businesses are “least positioned” to absorb the effects of a $15 federal minimum wage.

The National Restaurant Association has cautioned against a $15 minimum wage. Its vice president of public policy and workforce, Shannon Meade, warns that if Congress passes a $15 federal minimum wage that “drastically increase[s] operating costs then these small [restaurant] businesses will be forced to hire fewer people, reduce hours, or even close their doors.”

When Rep. Scott introduced this bill in the 115th Congress, it had the support of many organizations, including the American Federation of Teachers, the Economic Opportunity Institute, Feminist Majority, United Auto Workers (UAW), Justice in Motion, the National Center for Lesbian Rights, People Demanding Action, Oxfam America, and others.

Of Note: The federal minimum wage of $7.25 an hour for covered nonexempt workers hasn’t changed since July 2009. This means that adjusted for inflation, the lowest-paid worker’s spending power has fallen nearly 40 percent over the past five decades. However, the campaign for a $15 minimum wage has recently gained traction nationwide, with three states (California, Massachusetts, and New York, plus the District of Columbia) passing laws to gradually increase their wage floors to $15 and major cities, including San Francisco and Seattle, also increasing their base hourly wages to $15/hour.

According to 2017 estimates from the Economic Policy Institute, raising the federal minimum wage to $15 would increase wages for around 40 million people — nearly 30 percent of the workforce. This would include over 40 percent of African-American workers and one-third of Hispanic workers. Additionally, women — who currently make up nearly two-thirds of minimum wage workers — would also benefit from this bill. Once fully phased in, a $15 federal minimum wage would yield an approximately $3,500 increase in annual pay for the average affected worker.

First Focus Campaign for Children observes that since 28 percent of the workers that’d be affected by a $15 federal minimum wage increase have children, over 11 million children would directly feel the positive effects of an increased minimum wage. According to a 2015 report by the Children’s Defense Fund, parents working full-time at the current $7.25/hour federal minimum wage and supporting two children are $4,700 below the federal poverty rate. Increasing the minimum wage from $7.25 to $10.10 would reduce child poverty by four percent, lifting 400,000 children out of poverty — increasing the federal minimum wage to $15/hour would lift far more children out of poverty and make a bigger dent in child poverty. According to researcher at Indian University, raising the minimum wage by $1/hour would contribute to a 9.6 percent decline in reports of neglect of children between the ages of 0-12, as parents living in a constant state of financial instability often suffer from stress, anxiety, and depression, which compromise their abilities to respond to their children’s needs. Thus, increased income improves financial stability, improves the physical and mental health of children and families, and decreases child maltreatment rates.

Rep. Scott’s office contends that economists agree that since low-wage workers are more likely than any other income group to spend extra earnings immediately, a 10 percent increase in the federal minimum wage would increase sales by around $2 billion a year.

When the EPI conducted this same survey in 2015, it found that 72 percent of economists opposed a $15 federal minimum wage. The 2015 survey — which was completed by 166 U.S.-based economists, the majority of whom specialized in labor and identified as Democrats — was sent to 555 economists across the country, whose names were obtained from a database of roughly 1,4000 prominent economists from around the world maintained by the Institute for the Study of Labor. At that time, the EPI survey found that five out of six economists (83 percent) believed a $15 federal minimum wage would harm youth employment levels; three-quarters (76 percent) of economists believed a $15 minimum wage would decrease the number of available jobs; and two-thirds (67 percent) of economists believed a $15 minimum wage would make it more difficult for small businesses to survive. Only five percent of respondents believed that a $15 minimum wage would be an efficient way to address poor families’ income needs. By contrast, 71 percent said the Earned Income Tax Credit (EITC), which bolsters incomes through the tax code, is a very efficient way to address poor families’ income needs. Additionally, 76 percent of respondents said general welfare support (such as TANF and food stamps) are "somewhat" (52 percent) or "very" (24 percent) efficient at addressing low-income needs.

In October 2018, peer-reviewed research from University of California at San Diego economist Jeffrey Clemens and AEI researcher Michael Strain looked at what happened in employment in states that raised their minimum wages between January 2013 and January 2015. The average boost in those states was less than a dollar, but Clemens and Strain found that increases exceeding $1/hour “resulted in employment declines of just over one percentage point among teenagers, among individuals ages 16 to 21, and among individuals ages 16 to 25 with less than a completed high school education."

Looking at the results of Clemens’ and Strain’s research, The Week columnist James Pethokoukis concluded:

“Perhaps longer-run results would be different. But these and other similar findings signal caution is warranted. One can find plenty of economists on the left and right who think that while $15 an hour may make sense for some companies, a one-size-fits-all approach for businesses big and small around the country is a ‘risk not worth taking,’ as former Obama White House economist Alan Krueger has put it.”

A January 2018 study by economists Grace Lordan and David Neumark of the London School of Economics and the University of California-Irvine, respectively, found that “increasing the minimum wage decreases significantly the share of automatable employment held by low-skilled workers, and increases the likelihood that low-skilled workers in automatable jobs become nonemployed or employed in worse jobs.”