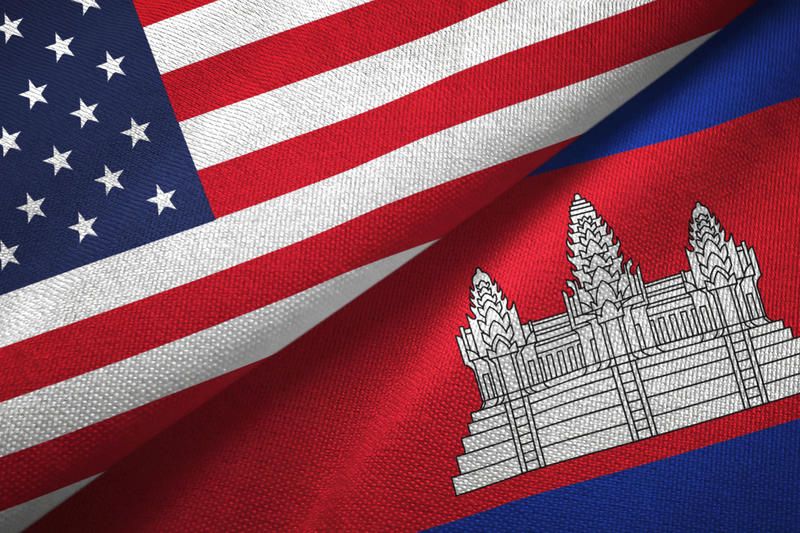 This bill — the Cambodia Democracy Act of 2019 — would direct the president to apply property-blocking and visa restriction sanctions against each senior official of the Cambodian government, military, or security forces who directly and substantially undermined democracy in Cambodia and committed or directed serious human rights violations. The president would also be required to periodically provide Congress with a list of sanctioned persons and periodically update the list.

Sanctions may be suspended for up to one year if the president certifies to Congress that Cambodia is making progress toward ending government efforts to undermine democracy, ending human rights violations, and conducting elections that allow for the participation of credible opposition candidates.

This bill’s requirements would expire five years after its enactment.

The U.S. already committed to restricting entry to people involved in Cambodian action to undermine democracy at the end of 2017, so while this bill is well-intended it’s unnecessary.

The CBO estimates that administering the sanctions in this bill would cost less than $500,000 a year and total $1 million over the 2019-2024 period.

In-Depth: Rep. Ted Yoho (R-FL) reintroduced this bill from the 115th Congress to apply new asset-blocking sanctions on government military or security officials who have undermined democracy in Cambodia or committed related human rights abuses. If passed, this bill would pave the way for sanctions to be placed on Cambodian Prime Minister Hun Sen’s inner circle. After this bill passed the House during the 115th Congress, Rep. Yoho said:

“The Cambodian people are being cheated out of their right to have free and fair elections. Hun Sen, Cambodia’s strongman Prime Minister, has tightened his grip on that country for decades and has no intention of relinquishing power. Hun Sen has decided that if he can no longer dominate the polls even in a rigged election system, he will retain control through force. His actions are a direct assault on democracy and the peaceful people of Cambodia.   Hun Sen’s relentless and systematic consolidation of power means that his numerous abuses, which include, violence, threats, attacks against NGOs, and the shuttering of critical media outlets, will only continue. The Cambodia Democracy Act of 2018 will push back against the Hun Sen regime’s undermining of democracy and related human rights abuses by applying financial sanctions to the individuals who carry out this despicable agenda and codifying the Administration’s existing visa restrictions for these individuals. I am happy we were able to pass this important bill out of the House today just before Cambodia’s July 29th national elections.”

In a separate statement in 2018, Rep. Yoho said the Cambodian people were “starving for democracy” and said this bill would “push back against the Hun Sen regime’s undermining of democracy... by applying financial sanctions to the figures who carry out this despicable agenda.”

Last Congress, then-House Foreign Affairs Committee Chairman Rep. Ed Royce (R-CA) said that Cambodia’s election wouldn’t be legitimate because “Hun Sen and his thugs long ago decided the outcome, by marginalizing, beating and imprisoning members of the opposition.” He noted that since Cambodia’s last general election in 2013 — which he called “deeply flawed” — Cambodians peacefully opposing their government have faced intensifying attacks as Hun Sen’s regime continues cracking down on its critics. Rep. Royce said that over the period 2017-2018 Hun Sen had “dispatched any notions of democracy in Cambodia … and completely dismembered the political system” in the country.

While Rep. Royce acknowledged that President Trump would have the final say on who should be designated for sanctions should this bill be enacted, he suggested a few people for Washington to start with: Hun Sen, Minister of the Interior Sar Kheng, Minister of Defense Tea Banh, Minister for Economy Aun Pornmoniroth, Secretary of State of Ministry Justice Koeut Rith, Minister of Public Works Sun Chanthol, and Minister of Foreign Affairs Prak Sokhonn, and Anti-Corruption Unit president Om Yentieng. Royce also called for sanctions against commander-in-chief of the Royal Cambodian Armed Forces (RCAF) Pol Saroeun; director-general of the National Police Neth Savoeun; deputy commanders-in-chief of the RCAF Kun Kim, Sao Sokha, and Hing Bunheang; and deputy chief of the National Police Choun Sovann. Finally, Royce singled out three of Hun Sen’s relatives — his son Hun Manet, who is deputy chief of RCAF Joint General Staff; his son-in-law Sok Puthyvuth, CEO of the SOMA Group conglomerate; and his daughter Hun Mana, chair of Bayon Height Media System — for sanctions.

Global Witness expressed support for this bill after it passed the House in July 2018. In a press release, the anti-corruption group called on the Senate to follow the House’s suit in passing this bill and to include on any sanctions lists the members of Cambodia’s corrupt business elite who have helped keep Prime Minister Hun Sen in power for 33 years through a corrupt system of patronage and state looting. In Global Witness’ press release, its campaigner Emma Burnett said:

“Cambodia’s sham election on Sunday is the logical conclusion of a decades-long power grab by the ruling elite. Under Hun Sen’s rule, a small group of politicians, military chiefs and business tycoons have looted the state to enrich themselves and consolidate their power. This has come at phenomenal cost to the Cambodian people, many of whom have been beaten, arrested and even killed for standing in the way. The Cambodia Democracy Act is the first big move towards tackling the damage that has been done to Cambodian people – but the Senate must now follow suit and hold to account all members of the elite who have driven this corruption and exploitation. Any international efforts to return freedoms and democracy to Cambodia must also take aim at those who bankroll his regime. These individuals have ensured that money generated from Cambodia’s strong economic growth over the past twenty years has made a small elite group rich at the expense of the poor. Meanwhile hundreds of thousands of Cambodians have suffered mass forced evictions, many of them extremely violent.”

Burnett cited Hun Sen’s eldest daughter Hun Mana and SOMA Group CEO Sok Puthyvuth, the son of former Deputy Prime Minister Sok An whose wife is Hun Sen’s daughter Hun Maly, as “excellent examples of business tycoons who have profited hugely from Cambodia’s corrupt system of patronage.” She argued that they “are among many businesspeople who should be punished for their role in gaming Cambodian politics and the economy in their favor.”

Cambodia’s government criticized this bill in May 2018, when it was introduced in the 115th Congress. Phay Siphan, a Cambodian government spokesman for the Council of Ministers, said the bill “offended” Cambodia and was “bad” U.S. foreign policy. He also said Rep. Yoho “drafted the bill in his office from the other side of the world ... it destroys America’s credibility.” Siphan also said this “politically motivated” bill was “aimed at attacking and defaming individuals that Cambodians regard as heroes” for liberating Cambodia from the Khmer Rouge and rebuilding the country.

After passing the House last Congress, this bill stalled in the Senate Foreign Relations Committee. In December 2018 — in the closing days of the 115th Congress — committee staff said there weren’t any plans to review the bill, but didn’t provide an explanation for the lack of committee action.

Of Note: Cambodian Prime Minister Hun Sen — who has led Cambodia since the mid-1980s — was described as an “increasingly dictatorial leader” in a 2018 Human Rights Watch (HRW) report. HRW alleges that he has maintained power with the help of personally loyal and and police officials and jailed opposition figures on trumped-up charges of conspiring with the U.S. to overthrow the government.

Hun Sen’s Cambodian People’s Party won all 125 seats in the country’s parliament following a crackdown on the opposition, civil society groups, and the media. Kem Sokha, the president of the opposition Cambodia National Rescue Party (CNRP), was jailed on treason charges for allegedly conspiring with the U.S. to overthrow Hun Sen. He was later placed under house arrest pending trial. During Sokha’s year-plus long imprisonment, the CNRP was dissolved.

“I think it’s just a sham for Hun Sen to go ahead and do that after the elections. He’s got nothing to lose right now because there’s no elections and he can claim legitimacy for being elected again even though he had warned any opposition, or ran them out of the country or locked them up, and stifled the press. But now the election has been held, he can claim now that he is a good guy and that he’s playing by the rules. It’s just the game he is playing that we’re not falling for,” added Yoho. “The free world doesn’t fall for that kind of nonsense. And if he is really concerned about leaving a legacy for him and his country, he would allow free and open elections. What’s he afraid of if he’s done a great job? You would think the people would overwhelmingly vote him in in free and open elections.”

In December 2017, the U.S. said it would restrict entry to people involved in Cambodian action to undermine democracy, including the dissolution of the Cambodia National Rescue Party and the imprisonment of Kem Sokha. These visa sanctions were the toughest steps by any Western country since Hun Sen launched his crackdown on critics.

Chinese support for Hun Sen’s regime, including its big-ticket projects, has allowed him to brush off Western criticism of his crackdown. China vastly outspends the U.S. in Cambodia, and its money goes to highly visible infrastructure projects without demands for political reform.