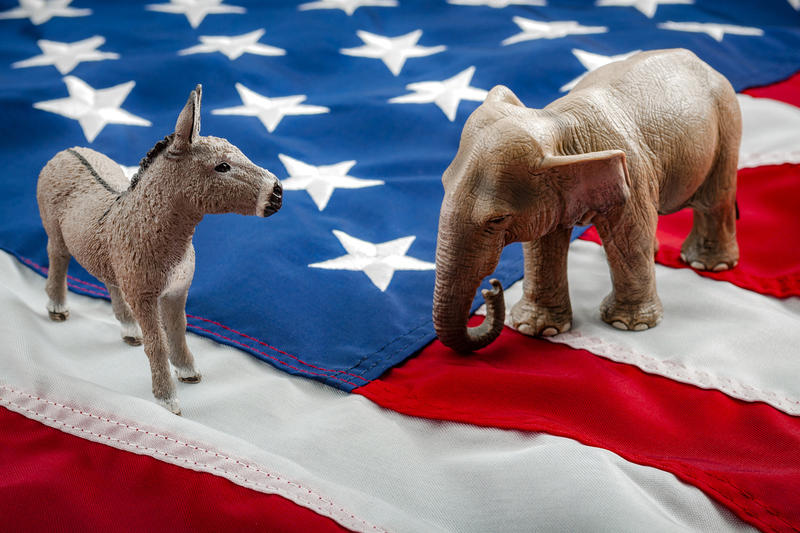 This bill — the For the People Act — would seek to reduce money’s influence in politics, restore ethics and integrity to government, and strengthen voting laws. The bill is divided into three divisions focused on Election Access, Campaign Finance, and Ethics. Each section is described in detail below.

Returned non-forwardable couldn’t be used as the basis for removing registered voters from the rolls. Individuals who aren’t election officials wouldn’t be allowed to challenge voters’ eligibility without an oath of good faith factual basis.

Providing false information about elections to hinder or discourage voting would be prohibited, and penalties for voter intimidation would be increased. The bill would also create sentencing guidelines for individuals found guilty of the deceptive practices previously described.

Released felons’ right to vote would be restored by declaring that citizens’ rights to vote in federal elections cannot be denied due a criminal conviction, unless they’re serving a felony sentence in a correctional facility. States and the federal government would be required to notify individuals convicted of state or federal felonies, respectively, of their re-enfranchisement.

States would be required use individual, durable, voter-verified paper ballots, and to count ballots by hand or using an optical character recognition device. Voters must be given opportunities to correct ballots in case of mistakes. Finally, ballots not be stored in a manner making it possible to associate a voter to their ballot.

Provisional ballots from eligible voters at incorrect polling places would be required to be counted.

There must be at least 15 consecutive days of early voting for federal elections. Early voting locations would have to be located near public transportation and be open for at least four hours a day.

States would be banned from imposing restrictions on individuals’ abilities to vote by mail.

States would be required to send absentee ballots at least 45 days before their election. States that fail to do so would incur a civil penalty.

The EAC would be charged with developing model training programs and awarding grants for training.

Individuals would be given private rights of action and ability to file administrative complaints.

State chief election officials would be banned from participating in federal campaigns, and they’d be banned from using official authorities to affect elections’ results.

The bill would also make various administration improvements to make it easier to vote, including:

This bill would also reauthorize the EAC and require states to work with it to carry out an assessment of voting systems’ adequacy to meet the demands of the 2020 election. The EAC would submit a report on its findings to Congress with a plan to replace outdated voting systems. States and the EAC would work together to administer post-election surveys.

States would be required to adopt independent redistricting commissions for drawing Congressional districts.

The bill would respond to the Husted decision by clarifying that failure to vote isn't grounds for removing registered voters from the rolls.

This bill would establish standards for election vendors based on cybersecurity and company ownership. It’d also allow the EAC to issue grants to states for: 1) improving and maintaining election systems; paper ballot systems; risk-limiting audits after elections; and election infrastructure innovation.

The President would produce a national strategy for protecting U.S. democratic institutions and create a National Commission to Protect United States Democratic Institutions to counter threats.

Voting systems would be tested nine months before each regularly scheduled general election for federal office. Electronic poll books would be defined as part of voting systems, and pre-election reports on voting system usage would be required.

Contributions and expenditures from corporations with significant foreign ownership or control would be banned, and the application of the foreign money ban regarding separate segregated funds would be clarified.

Super PACs, 501(c)4 groups, and other organizations spending money in elections would have to disclose donors contributing over $10,000. Organizations would banned from using transfers between themselves to mask source contributors’ identities. This section would also set forth and clarify rules governing court challenges to campaign finance law.

Stand by Every Ad

“Stand by your ad” disclosure requirements would be expanded to include leaders of corporations, unions, and other organizations purchasing political ads.

Would repeal the existing prohibition on the IRS promulgating rules to bring clarity to the rules governing 501(c) political activity.

Would repeal the existing prohibition on the Securities and Exchange Commission (SEC) finalizing rules to give shareholders the opportunity to know about publicly traded companies’ political spending.

Would repeal the prohibition on the executive branch promulgating rules to require government contractors to disclose all their political spending.

Presidential Inauguration Committees would be required to disclose their expenditures. Aggregate contributions would be limited, and funds couldn’t be used for non-inauguration purposes.

Expresses that Congress finds that the Citizens United decision is detrimental to America’s democracy and that the Constitution should be amended to clarify Congress’ and the states’ authority to regulate campaign contributions and expenditures.

Would create small dollar incentives to expand the universe of low-dollar contributors and establish an optional, publicly financed 6-1 matching system on small-dollar donations up to $200 for House candidates who demonstrate broad-based support and reject high-dollar contributions.

Would establish a publicly financed 6-1 matching system on the first $200 of a contribution to the presidential campaign of a participating candidate.

Authorized campaign expenditures would be expanded to include child care, elder service care, rent or mortgage payments, professional development and media training, and health insurance payments in order to make it easier for candidates of modest means to run for and win office.

The Federal Election Commission (FEC) would be restructured with five commissioners in order to break gridlock, and its civil penalty authority would be made permanent.

“Prohibited coordination” between campaigns and super PACs would be defined. A “coordinated spender” category would be created to ensure single-candidate PACs don’t operate as arms of campaigns.

Would require the development of a code of ethics for Supreme Court justices.

Would increase resources for the FARA office, create a FARA investigation and enforcement unit in the Dept. of Justice (DOJ), and give the FARA office the authority to impose civil penalties. It’d also require foreign agents to disclose transactions involving things of financial value conferred on officeholders.

Counseling in support of lobbying contacts is would be considered lobbying under the Lobbying Disclosure Act, and making it something that triggers registration.

Would require all presidential appointees to recuse themselves from any matter involving the president, the president’s spouse, or an entity in which the president or their spouse has a substantial interest.

Executive branch waivers would be disclosed to the Office of Government Ethics (OGE) and the public.

Would reauthorize the OGE and enhance its enforcement mechanisms.

Would require individuals nominated or appointed to Senate-confirmed positions and certain other senior government officials to disclose contributions by, solicited by, or made on behalf of an individual. It’d also require disclosure of certain types of gifts to these individuals or their families. The OGE would issue rules or address conflicts of interest identified in disclosures.

Presidents-elect would be required to develop ethics plans that apply to members of the transition.

Members of Congress would be prohibited from using taxpayer funds to settle employment discrimination cases against them.

Members of Congress would be prohibited from serving on for-profit entities’ boards. Rules prohibiting Members and their staff from using their positions to further their own or their immediate family members’ financial interests would be codified.

FEC reports and Lobbying Disclosure Act reports would be required to be linked online.

All Congressionally mandated reports from federal agencies would be required to be published online in a searchable and downloadable database.

The current political system is broken, corrupt, and badly in need of reform. This ambitious bill restores the promise of government for and by the people by ending money’s influence in politics, re-enfranchising felons, strengthening voter protections, making it easier to vote, and more.

Some of this bill’s provisions overreach beyond the limits of what Congress is constitutionally allowed to do, as it undermines Americans' First Amendment rights to political speech and would have a chilling effect on public discourse. Not only that, but the bill isn't going anywhere in the Senate.

The CBO estimates that enacting this bill would cost nearly $2.6 billion over the 2019-2024 period.

“We (Democrats) carried a message of reform, of fighting corruption, of cleaning up Washington. We made a promise to the American people. The new members who’ve come made that promise and made it clear they wanted this to be the first order of business. [This bill] is delivering on that promise.”

Government watchdog group Common Cause supports this bill. Its president, Karen Hobert Flynn, adds that the House should pass this bill quickly, and then forward it to the Senate to shine a spotlight on the Senate’s response, or lack thereof:

“We urge the House to pass the bill expeditiously and to forward the bill to the Senate in order to shine a spotlight on the Senate’s response – or silence in the face of public demand. Under Majority Leader Mitch McConnell, that response has been to declare any proposed democracy reform DOA. That stance must change, or the Senate may find itself with a number of new faces in 2021.”

This bill is expected to face stiff opposition in the Republican-controlled Senate, as well as from President Trump. Senate Majority Leader Sen. Mitch McConnell (R-KY) has already announced his opposition to this bill, calling it a "power grab" and saying the "sprawling 622-page doorstop is never going to become law."

Rep. Sarbanes has embraced Sen. McConnell’s opposition to this bill, as he says, “You could stamp on this thing ‘McConnell-rejected,’ and it would immediately give it more credibility… This was built for the public.”

The American Civil Liberties Union (ACLU) wrote to the House Rules Committee to say that while it supports many individual provisions of this bill, it opposes others that "unconstitutionally impinge on the free speech rights of American citizens and public interest organizations." Specifically, it opposes the following provisions for the reasons listed:

On some issues, such as redistricting, NPR’s Peter Overby reports that some of this bill’s provisions “push the envelope” and reach into state law:

“To settle the controversy over redistricting, the bill would simply take away the power of state legislatures to draw congressional districts and have independent commissions do it instead. That way, presumably, the local politicians could no longer gerrymander the districts to help their party and cripple the opposition.”

This bill has the support of the House Democratic caucus, as well as Public Citizen, the Communications Workers of America (CWA), the Alliance for Justice, the Center for American Progress (CAP), Common Cause, the Coalition to Stop Gun Violence, U.S. PIRG, and the Project on Government Oversight (POGO).

A companion bill will be introduced soon in the Senate.

Of Note: This bill’s title, H.R. 1, is a symbolic title meant to emphasize its importance, even if it won’t be the first piece of legislation to get a House vote in the new Congress. Although this bill stands little chance of getting anywhere beyond the House, Rolling Stone’s Andy Kroll points out that it’s important in several other ways:

“[This bill] announces that the health of our democracy is first and foremost on the minds of Speaker Pelosi and her new majority. And it puts down, in one place, a laundry list of ideas and possible reforms that can be individually enacted or adopted at the state level, giving Democrats a starting point for tackling issues — gerrymandering, voting rights and more — that voters increasingly see as vital to the future of this country… [F]aced with the most ethically challenged president since Richard Nixon, Pelosi and the Democrats have signaled that rolling back decades of anti-democratic policies and resuscitating our ailing electoral system is at the top of their to-do list.”

Summary by Lorelei Yang (with contributions from Eric Revell)