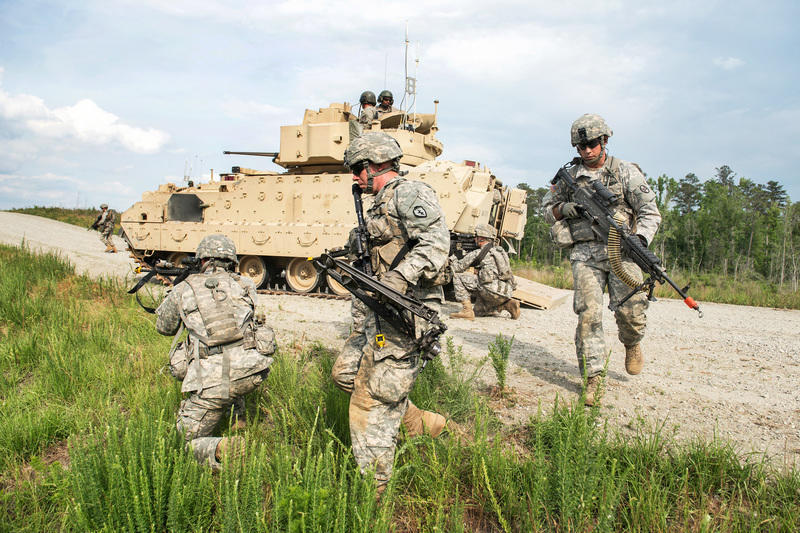 This bill — known as the Make America Secure Appropriations Act — combines four of the 12 annual appropriations bills into one piece of legislation, including funding for the Dept. of Defense (DOD), military & veterans affairs, energy & water development, and the legislative branch. The funding totals for each section of the bill would be as follows: $658.1 billion for the DOD; $88.8 billion for military construction & veterans affairs; $37.56 billion for energy & water development; and $3.58 billion for the legislative branch.

This legislation would provide $658.1 billion for the DOD in fiscal year 2018. Of this, $584.2 billion would be discretionary funding — up $68.1 billion over the prior year — while $73.9 billion in funding would be provided for Overseas Contingency Operations (OCO) / Global War on Terrorism (GWOT).

Military pay would total $138.3 billion under this bill, $5.3 billion of which for OCO/GWOT requirements with the rest going to base pay. That would support 1,324,000 active-duty troops and 822,900 Guard and Reserve troops. A 2.4 percent pay raise for the military would be fully funded.

Operation and maintenance funding would total $241 billion, of which $49 billion is for OCO/GWOT requirements. Base funding would be $24.1 billion above fiscal year 2017, with the increase aimed at filling readiness shortfalls to provide troops with training and equipment.

Equipment procurement and upgrades would total $149 billion — up $24.1 billion from the prior year — of which $16.5 billion would go to OCO/GWOT requirements. Base requirements would be $24.1 billion above fiscal year 2017. Some of the highlights include:

Defense health and military family programs funding would total $34 billion, up $150 million from the prior year, for the Defense Health Program to provide care for troops, military families, and retirees. Of the total, $282 million would go to cancer research, $125 million for traumatic brain injury and psychological health research, and $277 million for sexual assault prevention and response.

Some of the savings that would be gained under this bill are $1.5 billion in savings from rescinding unused prior-year funding, $1 billion from lower-than-expected fuel costs, and $345 million due to favorable economic conditions.

A total of $88.8 billion in discretionary funding would be authorized by this section of the bill — $6 billion more than what was authorized for fiscal year 2017 — of which $638 million would go to Overseas Contingency Operations (OCO) accounts for base construction.

The Dept. of Veterans Affairs (VA) would receive $182.3 billion in both discretionary and mandatory funding, an increase of $5.3 billion from fiscal year 2017. Discretionary funding makes up $78.3 billion of that total, up $3.9 billion from fiscal year 2017. Mandatory funding provides veteran disability compensation for 4.5 million veterans and their survivors, education benefits for 1 million veterans, and vocational rehabilitation and employment training for more than 145,000 veterans.

VA medical care would total $69 billion to treat an estimated seven million patients in fiscal year 2018. Of that, funding would be broken down as follows:

To speed up the process of reducing the VA’s disability claims backlog (about 312,000 veterans), $50 million in funding above the president’s budget request would be provided to be used on the scanning of health records and overtime pay. The bill would also continue existing reporting requirements that track each regional office’s performance on claims processing and appeals backlogs.

The VA’s electronic health record system would be modernized using $65 million set aside by this bill to use an identical electronic record system as the DOD. Major and minor construction at VA facilities would be funded at $753 million, which includes money for the construction of new facilities and the expansion of cemeteries that are reaching capacity before 2022.

Advance appropriations for fiscal year 2019 would also be provided by this bill, including $70.7 billion for veterans’ medical programs and $107.7 billion for mandatory benefit programs.

Military construction projects would receive $10.2 billion in funding, an increase of $2.1 billion above fiscal year 2017, with $638 million in OCO funding for projects in countries with ongoing U.S. operations. This would fund operational facilities, training facilities, hospitals, family housing, National Guard readiness centers, and barracks among other resources. A total of 215 military constructions projects in the U.S. and overseas would be funded.

Some of the highlights of the military construction funding include:

This bill would provide $37.56 billion for the Dept. of Energy (DOE), Army Corps of Engineers, and national defense nuclear weapons activities — a reduction of $209 million from the previous year and $3.24 billion above the president’s budget request for fiscal year 2018.

Funding for nuclear security would total $13.9 billion — up $976 million over last year — of which $10.2 billion would go to maintaining the military’s nuclear deterrent, $1.4 billion for naval nuclear reactors, and $1.8 billion for nuclear nonproliferation. Included in the nonproliferation funding would be $340 million to build a facility for disposing of surplus plutonium).

The Army Corps of Engineers would receive $6.16 billion for fiscal year 2018, up $120 million from the prior year and $1.16 billion more than the president’s budget request. Of the total, $2.8 billion would go to navigation projects and studies, while $1.8 billion would fund flood and storm damage reduction activities.

Other provisions that would be funded under this section include:

Other policy items that would be enacted under this section include:

This bill would provide $3.58 billion for the House and joint operations of Congress (excluding Senate-only items) for fiscal year 2018, $100 million more than 2017 but $228 million less than the president’s request.

House operations would be funded with $1.194 billion for the pay of members and their staffs, leadership, committees, and Officers of the House — $5 million more than last year to enhance security for members when they’re away from the Capitol complex and cybersecurity enhancements. Pay would remain frozen for members Congress, as it has been since 2010.

Capitol Police would be funded at $422.5 million, an increase of $29.2 from the prior year, which provides for the security of members, staff, and visitors of the Capitol. The increase would fund additional training, equipment, and technology-related support.

Among the other items funded by this section are:

This spending package provides too much defense funding and shortchanges too many critical areas, like renewable energy research. Plus these bills should be considered individually.

The military; veterans and their families; visitors to the U.S. Capitol; members of Congress; energy & water programs; the DOD, DOE, the VA, and other federal agencies.

“The highest priority of Congress is to ensure the safety and security of our nation and to guarantee the future of our great democracy - this critical national security legislation needs to head to the floor. All of our Appropriations bills contain important funding for essential programs that serve the American people. I am committed to getting these security bills, as well as every single one of the remaining eight Appropriations bills, through the legislative process and to the President’s desk.”