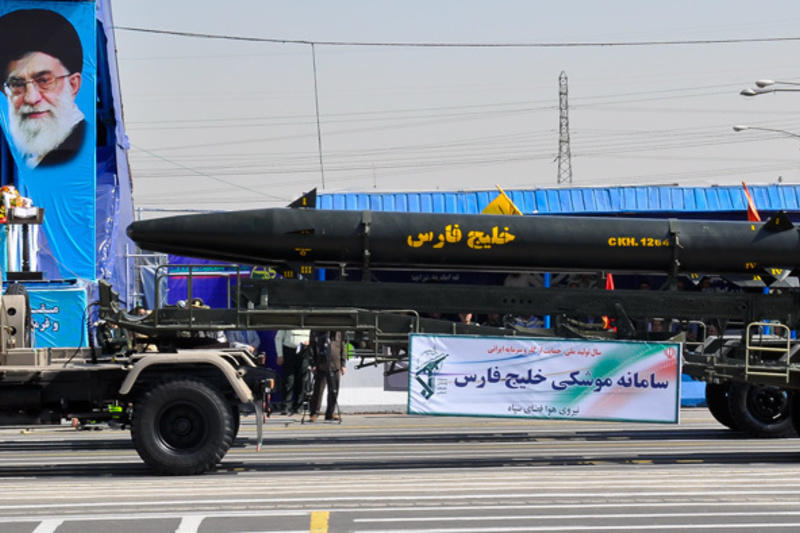 Expanding Sanctions on Iran for its Ballistic Missile Program and Russia for its Electoral Meddling (Among Other Things) (S. 722)

This bill would impose new sanctions on Iran related to its ballistic missile program and support for terrorism, while also enforcing the embargo on Iranian arms sales and punishing human rights violations. Sanctions would be imposed by the president, and focus on the individuals and entities carrying out those actions. The sanctions wouldn’t be directed at Iran’s nuclear program, and as a result don’t violate the letter or spirit of the Iran nuclear agreement. It would also, through an amendment, expand sanctions on Russia for its meddling

The bill would mandate sanctions on people who engage in or pose a risk of contributing to Iran’s ballistic missile program and those who support such persons. The Islamic Revolutionary Guard Corps (IRGC) would be sanctioned for supporting terrorism (it’s already sanctioned for non-proliferation and human rights abuses), and people who violate the UN arms embargo against Iran. Sanctions could only be lifted on persons who supported Iran’s terrorism or ballistic missile program if they have ceased support for those activities for three months.

It would also require the Depts. of State, Defense, and Treasury to work with the Director of National Intelligence to submit a strategy every two years aimed at deterring conventional and asymmetric Iranian activities that threaten the U.S. and key allies in the Middle East, North Africa, and beyond.

Reports would be required on U.S. citizens detained by Iran and discrepancies between U.S. and European Union sanctions on Iran. The president would be authorized to waive sanctions against individuals on a case-by-case basis for up to 180 days if it’s determined to be in the national security interests of the U.S.

The amendment to the bill would make into law and strengthen existing sanctions contained in executive orders on Russia, including the sanctions' impact on Russian energy projects and on debt financing in several key economic sectors. It would also provide for a mandated congressional review if sanctions are relaxed, suspended, or terminated.

New sanctions would be imposed on Russians involved in corruption; evading sanctions; abusing human rights; supplying weapons to the Assad regime; conducting malicious cyber activity on the Russian government's behalf; the corrupt privatization state-owned assets; and those doing business with the Russian intelligence and defense sectors.

Additionally, new sanctions would be imposed on several sectors of Russia's economy including mining, metals, shipping, and railways. An exceptions would be made for activities involving the National Aeronautics and Space Agency (NASA), which currently relies on certain Russian-made equipment.

The amendment would also provide assistance to strengthen democratic institutions and look to counter disinformation across Central and Eastern European countries that are vulnerable to Russian aggression and interference. It would also reaffirm the importance of NATO in contributing to maintaining stability around the world.

A study on the flow of illegal finance involving Russia and a formal assessment of U.S. exposure to Russian state-owned entities would be required.

This bill would sanction Iran for its ballistic missile program, support for terrorism, and violating the UN arms embargo without violating the nuclear agreement. Russia needs to be punished for its meddling in elections, aggression in Ukraine & Crimea, and its support for Syrian tyrant Bashar Assad.

This bill may not specifically target Iran’s nuclear program, but it would back Iran further into a corner and make nuclear compliance less likely. Expanding sanctions on Russia will only worsen the relationship between two of the world's most powerful nations, which will only make the situation worse.

Individuals sanctioned for supporting Iran’s ballistic missile program, terrorism, arms embargo violations, or human rights abuses; the Depts. of State, Defense, and Treasury plus the Director of National Intelligence; and the President.

The CBO estimates that enacting this bill would cost $10 million over the 2018-2022 period.

“This legislation demonstrates the strong bipartisan support in Congress for a comprehensive approach to holding Iran accountable by targeting all aspects of the regime’s destabilizing actions. These steps will allow us to regain the initiative on Iran and pushback forcefully against this threat to our security and that of our allies.”

Lead cosponsor Sen. Bob Menendez (D-NJ) also praised the “spirit of bipartisanship” evident in this bill, and noted that it wouldn’t impact the Iran nuclear deal:

“This legislation was carefully crafted not to impede with the United States’ ability to live up to its commitments under the JCPOA, while still reaffirming and strengthening our resolve by imposing tough new sanctions to hold the Iranian regime accountable for threatening global and regional security. Iran's leaders must understand once and for all, that unless they change course their situation will only get worse.”

This legislation passed the Senate Foreign Relations Committee and has the support of 54 bipartisan cosponsors — including 36 Republicans, 17 Democrats, and one Independent.