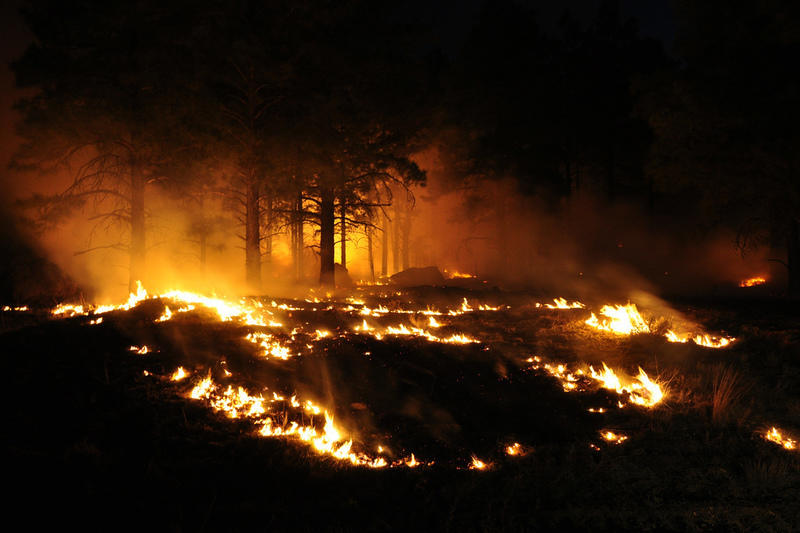 Does the Dept. of the Interior Need More Flexibility to Manage Wildfire Threats? (H.R. 2647)

In hopes of reducing the threat of wildfires, this bill would change the way federal forests are managed, and aims to improve the overall health and biodiversity of the forests.

This bill hopes to streamline the process for maintaining forests before catastrophic fires, and restoring them afterwards. For example, the bill doesn't create any new mapping, planning, rule-making, or reporting requirements for forest management agencies.

To speed things up, categorical exclusions (exemptions from environmental impact statements or assessments) would be available to the Forest Service for activities that:

Categorical exclusions would be limited to 5,000 acres. However, they could cover up to 15,000 acres if developed collaboratively, proposed by a resource advisory committee, or are covered by a community wildfire protection plan.

After a catastrophic event, the Forest Service would be able to quickly remove dead trees. This, in turn, would pay for reforestation and rehabilitation, which includes the planting of trees, surveying natural regeneration, clearing vegetation around seedling, and other activities.

This legislation allows states that wish to establish “revolving funds” accounts to manage their national forests to do so, as states like Montana, New Mexico, and Oregon had experienced difficulty doing so previously.

To bolster cooperation between various groups, environmental groups, timber companies, local stakeholders, and wildlife groups — among others — would participate in the planning and implementation of collaborative projects.

Existing environmental reviews would be maintained, though their requirements for project planning times and the costs of implementing forest management projects would be reduced.

Legal challenges against collaborative forest management projects would require a bond in order to proceed, which prevents frivolous challenges from indefinitely delaying projects and increasing costs.

When deciding on collaborative forest management activities, the Secretary of the Interior (DOI) could only consider two alternatives — the proposed activity or doing nothing. When assessing the option of doing nothing, considerations would include forest health, habitat diversity, the potential for wildfire, insect and disease infestation, and impacts on community water systems.

Wildfires are a major economic and environmental threat to national forests. Giving forest management agencies more flexibility while getting help from community partners and businesses can only improve the status quo.

Trying to protect national forests from wildfires is a worthwhile goal, but it requires additional funding — which this bill doesn’t provide. It also makes it harder to bring a legal challenge delaying forest management projects from going forward.

Residents of areas affected by wildfires and visitors to the area, groups participating in forest management projects, the Dept. of the Interior, and the Secretary of the Interior.

Expressing opposition to this bill, the Wilderness Society blasted “short cuts that would rush the environmental review and short change the public comment process.” It also strongly condemned the creation of exemptions for logging and road building in certain parts of national forests.

Approximately one-quarter of the 193 million acre National Forest System is considered to be at risk of wildfires.