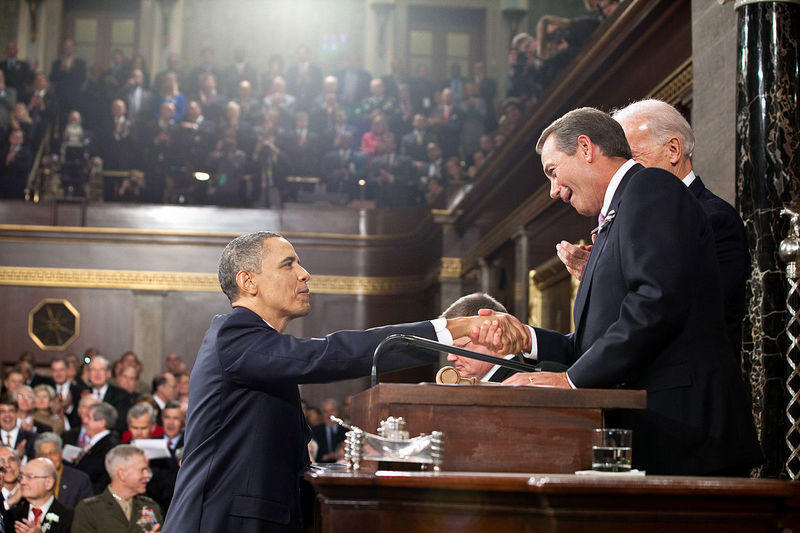 Raising the Debt Limit and Establishing a Two-Year Budget (H.R. 1314)

This bill was originally the "Ensuring Tax Exempt Organizations the Right to Appeal Act," aimed at creating an appeals process for tax-exempt organizations who had their status rejected by the IRS. Passed through committee and approved by a House voice vote, and into the hands of the Senate, this bill became something completely unrelated. Through the amendment process, the Senate turned the original bill into a legislative vehicle for two other bills about trade. After alternative trade legislation passed Congress and was signed into law, this bill was repurposed as the legislative vehicle for the bipartisan budget agreement constructed by Congressional Republicans and the White House.

The requirement for large employers (more than 200 employees) to automatically enroll new full-time employees into a qualifying health plan, if one is offered, would be repealed.

This bill prevents a substantial increase in Medicare Part B premiums paid by beneficiaries who are not held harmless. Rather than increasing to $159.30 the premium would be held at $120.

Cooperative Disability Investigations (CDI) units would be empowered to investigate Social Security fraud nationally with the assistance of state and local law enforcement to investigate suspected fraud before benefits are awarded. There would also be new and stronger penalties for Social Security fraud, including a new felony punishable by up to five years in prison, fines of up to $250,000 or both.

The cap adjustment for Social Security would be increased for fiscal years 2017-2020 by $484 million over that periods. Beyond existing purposes, funds could be used for CDI units and Special Assistant U.S. Attorneys who prosecute Social Security fraud, and work-related continuing disability reviews.

Unintended loopholes in Social Security’s rules related to dual enrollment and benefit suspension would be closed.

Coordination between the Office of Personnel Management (OPM) and the Social Security Administration (SSA) would be improved by allowing SSA to repay Federal Employee Retirement System (FERS) benefits to OPM when OPM overpays.

The debt limit would be lifted temporarily through March 15, 2017. On March 16 of that year, the public debt limit would be increased by the amount of obligations issued that have their interest and principal guaranteed by the federal government that are outstanding. Obligations that aren’t issued out of necessity to fund a commitment incurred by the government requiring payment before March 16, 2017 wouldn’t be considered.

The Secretary of the Treasury would be prohibited from abusing the suspension of the debt limit to build up cash balances beyond normal operating balances.

All federal agencies that have civil monetary penalties would be required to update the value of those penalties to reflect changes in inflation between 1996 and October 2015. The increase would be capped at 150 percent, so that a penalty currently set at $10,000 couldn’t increase to more than $25,000. Going forward, agencies would be required to adjust their penalties annually based on changes in the rate of inflation.

Pension plan liabilities have to be valued using spot interest rates or the interest rates on corporate grade bonds. Currently, liabilities from 2012-2017 aren’t deemed to vary by more than 10 percent from the average interest rates over the prior 25 years, and that cap grows by 5 percent per year through 2021 when it would remain at 30 percent. This legislation would change that, freezing the interest rate corridor at 10 percent through 2019, at which point it grow by 5 percent per year until 2023, after which it would remain at 30 percent. By changing this, Congress anticipates that employers would defer taking advantage of the tax deductible pension contributions to a later date, resulting in greater tax receipts during the interim.

The Dept. of Energy (DOE) would be required to notify Congress of any test sales from the Strategic Petroleum Reserve (SPR). It would also be authorized to include terrorism in the definition of a “severe energy disruption” that would allow sales from the SPR.

58 million barrels of oil could be sold from the SPR between 2018 and 2025, but sales are prohibited if it’s determined the sales would undermine its ability to reduce the adverse impacts of severe domestic energy supply interruptions. Up to $2 billion in proceeds from such sales would go towards the Energy Security and Infrastructure Modernization Fund subject to approval by Congress.

Federal Crop Insurance would be modified to require the renegotiation of the Standard Reinsurance Agreement before the end of 2016 and at least once every five years thereafter. The overall rate of return for the insurance providers would be capped at 8.9 percent, as it currently sits at 14.5 percent.

To improve the collection of debts owed to the U.S. government, automated telephone calls would now be allowed to be made to cell phones. The Federal Communications Commission would be directed to issue regulations on the matter.

Approving this budget will end the cycle of governing by crisis that featured stopgaps and continuing resolutions — providing needed certainty to the economy and the government for the next two years.

There isn’t enough to like in this budget deal for either side of the debate — deficits will remain too high into the future, while spending on domestic programs and the military remains insufficient.

Beneficiaries of Social Security, Medicare, and other federal programs; the military; and the federal government.

The CBO estimates that this legislation would decrease spending by nearly $46 billion and increase revenues by over $29 billion over the 2016-2025 period. It would lead to a net decrease in deficit spending totaling more than $75 billion over that period.

In-Depth: In a press release, Speaker John Boehner (R-OH) emphasized the necessity of this legislation while also recognizing its flaws:

“This deal isn’t perfect by any means — but everyone should acknowledge what our alternative was. If we didn’t reach a bipartisan budget agreement, we would have been forced to accept another “clean” debt ceiling increase. Instead, we negotiated a plan that will also support our troops and deliver real entitlement reforms. In my view, this is the best possible deal at this moment for our troops, for taxpayers, and for the American people.”

Pursuing a bipartisan agreement played a role in Speaker Boehner’s resignation from Congress, but the fact that a deal was reached has “cleared the barn” for the next Speaker, presumably Rep. Paul Ryan (R-WI). But that didn’t necessarily endear the outgoing Speaker with members of his own party — in particular the Freedom Caucus — whose leader, Rep. Jim Jordan (R-OH), blasted the agreement:

“It’s a bad deal. It was done in a process that was bad, and the product is not good. That is not the way we are supposed to be handling things around here if we are going to address the $18 trillion debt problem we have. It’s just not the way you want to do business.”

It should be noted that funding the government will still require the passage of appropriations legislation before December 11, 2015 to facilitate spending within the levels set forward in this bill.

Summary by Eric Revell
(Photo Credit: "Obama Boehner State of the Union 2011" by Pete Souza (Executive Office of the President of the United States) - http://www.whitehouse.gov/photos-and-video/photogallery/2011-state-union-address. Licensed under Public Domain via Commons)