Watch & Comment Live - Castro: Trump ‘Left Everyone in This Capitol for Dead’ by Not Sending Help

How did you feel about today's trial?

The Senate will hear presentations by the impeachment managers starting today at 12pm EST.

We'll be updating with key quotes and moments from the trial below.

Catch up on yesterday's trial here.

The trial is done for the day

Rep David Cicilline (D-RI), one of the House impeachment managers, argued that former President Trump "did not once condemn this attack":

"He did not once condemn the attackers. In fact, on January 6th, the only person he condemned is his own Vice President Mike Pence, who was hiding in this building with his family, in fear for his life. In the first crucial hours of this violent attack, he did nothing to stop it, nothing to help us."

Cicilline asked the senators a rhetorical question: What was Trump doing to help them as Democrats and Republicans reached out to the White House for assistance?

"Nothing," Cicilline said. "Not a thing."

6:30 p.m. ET - The Senate is back in session after taking a break for dinner

Trump's defense lawyer Bruce Castor said the House managers have failed to connect the rioters' acts to the former president:

“I didn't learn anything that I didn't already know.  We know a mob reached the Capitol and wreaked havoc in the building. I’m waiting for them to connect that up to President Trump and so far that hasn’t happened," he said.

The man seen in the viral photo at Pelosi's desk carried a 950,000-volt stun gun

"The weapon could have caused serious pain and incapacitated anyone Barnett had used it against," said Plaskett. 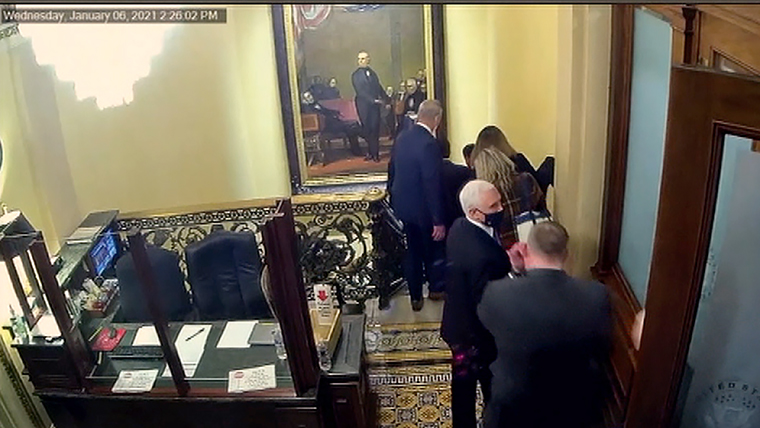 “Leading up to the event, there were hundreds — hundreds — of posts online showing that his supporters took this as a call to arms to attack the Capitol."

House Managers will now focus on the January 6th insurrection.

House impeachment manager Stacey Plaskett of the Virgin Islands is going over the timeline of events with the aid of a model.

"Someone shouted up to us, 'Duck!' Shortly after, there was a terrifying banging on the chamber doors."

"I will never forget that sound," she said, choking up.

Supporters of the president have pointed to his call to supporters at the rally to “peacefully and patriotically make your voices heard.”

House Impeachment Manager Del. Stacey Plaskett of the Virgin Islands shows memes from the internet in anticipation of the January 6 riot:

Plaskett said that Trump spent months "cultivating groups of people" who followed his commands and engaged in violence.

"He fanned the flame of violence. The violence was what he deliberately encouraged."

"President Trump was telling you that you owe him, that if you don't help him fight to overcome the results, he will never forget and there will be consequences," Lieu said. "The President wasn't just coming for one or two people, or Democrats like me. He was coming for you — or Democratic and Republican senators. He was coming for all of us, just as the mob did at his direction."

"I was trained as a prosecutor at the air force base in Alabama, and I remain in the reserves because we're the greatest country in the world. But how did our exceptional country get to the point where a violent mob attacked our Capitol, murdering a police officer, assaulting over 140 other officers? How did we get to the point where rioters desecrated, defiled and dishonored your Senate chamber? The very place in which you sit became a crime scene, and where National Guard troops still patrol outside wearing body armor? I'll show you how we got here..."

After a 15-minute break, the Senate is back in session

House Manager Madeleine Dean (D-PA) said Trump filed and lost over 60 lawsuits, refusing to accept the election results and continuing to undermine the legitimacy of the election.

Senators are taking a 15-minute break

"Day after day [Trump] told his supporters false, outlandish lies that the victory, that the election outcome was taken and it was rigged. And he had absolutely no support for his claims, but that wasn't the point. He wanted to make his base angrier and angrier. And to make them angry he was willing to say anything."

Swalwell cited a Nov. 15 tweet from Trump that said, “I concede nothing.”

On Nov. 28, Trump tweeted: “We have found many illegal votes. Stay tuned!”

Trump: "[T]here won't be a transition of power. There'll be a continuation."

Dawn Bancroft was charged with violent entry on Capitol grounds.

Rep. Joe Neguse (D-CO) outlines the three points the Senate should keep in mind during the prosecution's arguments:

Neguse is providing a roadmap of what led up to the Jan. 6 attack on the Capitol.

“Armed supporters surrounded election officials’ homes. The secretary of state for Georgia got death threats. Officials warned the president that his rhetoric was dangerous and was going to result in deadly violence. When he saw the violence his conduct was creating, he didn’t stop it. He didn’t condemn it. He incited it further.” -Neguse

"As a son of immigrants, I believe firmly in my heart that the United States is the greatest republic this world has ever known, a hallmark of our republic, since the days of George Washington has been peaceful transfer of power. Unfortunately, sadly, we know now we can no longer take that for granted." -House impeachment manager Rep. Joe Neguse in his opening remarks

"As Justice Scalia once said, memorably, you can't ride with the cops and root for the robbers," Raskin said, referring to a 1987 opinion Scalia wrote in the significant First Amendment case Rankin v. McPherson.

Rep. Jamie Raskin of Maryland, the lead House impeachment manager, opened up the second day of trial proceedings by arguing "that Donald Trump surrendered his role as commander in chief and became the inciter in chief of a dangerous insurrection."

"He watched it on TV like a reality show. He reveled in it. He did nothing to help us as commander in chief. Instead, he served as the inciter in chief sending tweets that only further incited the rampaging mob."

Each side will have up to 16 hours to present their case. Presentations must be made over two days and are limited to eight hours a day.

The impeachment managers for this trial:

House Democrats will make their case for why they believe Trump committed high crimes and misdemeanors for his conduct in the weeks leading up to - and the morning of - the January 6 riot at the U.S. Capitol.

Trump lawyers Bruce Castor and David Schoen have already argued that the trial is unconstitutional as Trump is no longer in office and denied his responsibility in inciting the Capitol attack.

Prepare for the trial: