IT: 💉 Trump adviser says Michiganders should 'rise up' against COVID-19 restrictions, and... How do you feel about the electoral college?

Join the 53,376 people who've taken action on Causes this week

Whitmer announced her restrictions as the U.S. hit 11 million cases of coronavirus, averaging about 150,000 new cases a day.

Whitmer, who was the target of a kidnapping plot by a far-right militia group earlier this year, had announced the following restrictions in Michigan:

In response to Atlas' comments, the governor said:

"We know that the White House likes to single us out here in Michigan, me out in particular. I'm not going to be bullied into not following reputable scientists and medical professionals."

How do you feel about Atlas' remarks?

TRUMP: "I WON THE ELECTION!"

The dismissals of the cases - which all involved plaintiffs represented by lawyer James Bopp and conservative group True the Vote - occurred in Georgia, Michigan, Pennsylvania and Wisconsin.

Biden has 306 Electoral College votes - 36 more than he needs for victory - compared with just 232 votes for Trump.

President Trump asserts that he no intention of conceding the race and continues to push unfounded claims of voter fraud.

Do you accept the election results?

Election Day has never been a conclusion. It actually represents the beginning of an official process for finalizing election results that takes several weeks.

All states are required to have election-related legal challenges resolved by December 8th so that they can certify their election results by December 14th, but the process moves much faster in some states. This USAFacts chart shows the number of days between Election Day and the estimated certification deadline in each state: 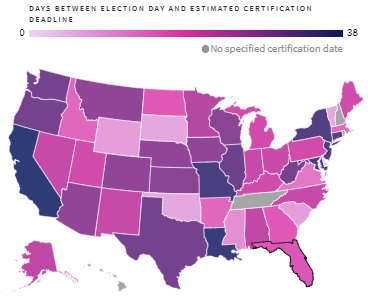 Check out our electoral college timeline here, then join the conversation:

How do you feel about the process for certifying elections and finalizing electoral votes?

That is not the joke.

Here's one I don't hate: