Last week, Mississippi voters approved a new state flag by an overwhelming majority (71.39% voted “yes” while 28.61% voted “no). The new state flag design does away with the Confederate Flag imagery used in the old Mississippi state flag. The new flag features a magnolia blossom; the phrase “In God We Trust”; and 20 stars to symbolize Mississippi’s status as the 20th state to join the Union.

“This is not a political moment to me, but a solemn occasion to lead our Mississippi family to come together to be reconciled and to move on. We must understand that all who want change are not attempting to erase history and all who want the status quo are not mean spirited or hateful. ... I also understand the need to commit the 1894 flag to history and find a banner that is a better emblem for all Mississippi."

“This is a historic & long-awaited day for Mississippi. I appreciate our state legislators for having the courage and conviction to make this necessary change to our state flag. As I have maintained since 2015, Mississippians deserve a banner that unites us rather than divides us."

The Mississippi Republican Party supported the adoption of a new state flag as an “organic change” from inside the state:

“This was an organic change from inside Mississippi, led by Mississippi elected officials. We should be proud of that, regardless of whether outside voices praise or slander our effort. Governor Reeves, Lieutenant Governor Hosemann and Speaker Gunn are to be commended for their leadership. ... We now have a unique opportunity, during a time of unrest in other parts of the country, to do what Mississippians have always done best—come together during times of trial to reach upward and step forward together."

After this measure’s passage, State Rep. Jeramey Anderson (D), author of the House bill, called the new flag one that “unites rather than divides” and a step in the right direction for Mississippi:

“This was a bold, bipartisan step that shows the world Mississippi is finally ready to step out from under the cloud of slavery and Jim Crow. But it isn't the final step. Mississippi and the United States remains plagued by systemic racism that keeps people of color from being truly free and equal."

State Sen. Chris McDaniel (R), who opposed the process by which the new flag was developed, said:

“I think we owe it to history to push back against a movement like that. And ultimately, in my mind, it is not about a flag at all, this is about the people having a voice. Ultimately we will be pleased with whatever the people decide, it’s just to take the issue away from them causes more harm in the long run then it should.”

Let Mississippi Vote also opposed this ballot measure. It said that it would sponsor a future ballot initiative related to the state flag when it reached 5,000 volunteers. The organization criticized the lack of popular input in the decision to bring the question of adopting a new flag to voters:

“With the historic flag vote in Jackson, our legislators stole our voice from us. If you would like to volunteer to make sure Mississippi has a voice on deciding our state flag, please sign up today.”

Prior to this measure’s approval, a statewide referendum to replace the Mississippi state flag failed 19 years ago in 2001. At that time, 65% of voters voted to keep the existing flag rather than to adopt a new flag with 20 white stars on a blue background.

This measure began as House Bill 1896, which the Mississippi state legislature passed and Gov. Reeves signed into law on June 30, 2020. That bill removed the official status of the previous state flag and established the Commission to Redesign the Mississippi State Flag. The commission was tasked with designing a new state flag and reporting the recommended design to Gov. Reeves and the state legislature.

The public was able to submit flag designs to the Mississippi Dept. of Archives and History (MDAH) until August 1, 2020. Ultimately, the flag redesign commission received about 3,000 flags that met the criteria for consideration and narrowed the designs down across four meetings until the final design was selected on September 2, 2020. 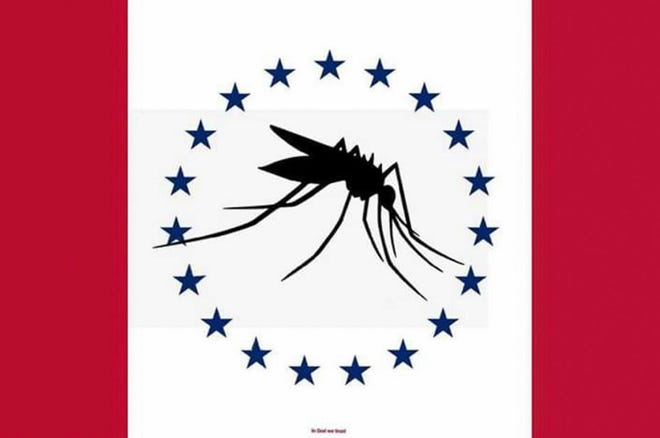 The Mosquito Flag’s creator, 26-year-old dockhand Thomas Rosete, said of his flag’s journey from inclusion in round two to withdrawal from consideration, “It was a very emotional hour. “I went from the highest of highs to, ‘Oh, well, that sucked.’”

What does the State Flag Referendum do? 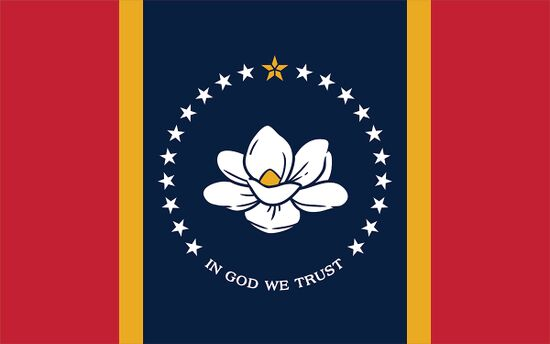 The new design features a white magnolia blossom (Mississippi is nicknamed “the Magnolia State,” the magnolia is its state flower and the magnolia tree its state tree) on a dark blue backdrop. The 20 stars surrounding the flower signify Mississippi’s status as the 20th state in the union, and the gold five-point star reflects Mississippi’s indigenous Native American tribes.

This new flag replaces the Mississippi state flag that the state legislature adopted in 1894. That flag included the Confederate Battle Flag on its left side: 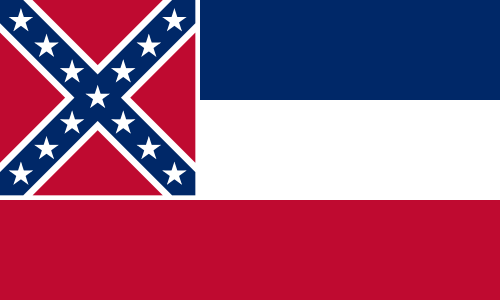 After Georgia removed the Confederate flag from its flag in 2001, Mississippi became the only state with a state flag containing the Confederate flag. In recent years, Mississippi’s state flag had come under fire as a symbol of oppression and a celebration of the state’s racist past. Criticisms of the flag increased this year against the backdrop of social justice protests and heightened national awareness of the impacts of systemic racism and injustice on Black communities.