A Closer Look at the Public Art at Chicago Police Stations

Join the 44,873 people who've taken action on Causes this week

ProPublica Illinois is a nonprofit newsroom that investigates abuses of power. Sign up to get weekly updates about our work.

Last week, Chicago Mayor Lori Lightfoot’s office announced a plan to reassess the city’s hundreds of pieces of public art, including monuments and memorials. The announcement came about a month after the city removed two statues of Christopher Columbus — without warning and in the middle of the night — following protests. In a statement, Lightfoot said the effort “is not just about a single statue or mural, but how we create a platform to channel our city’s dynamic civic energy to purposefully reflect our values as Chicagoans.” She also announced the formation of a committee to review “artworks that may be problematic.”

The details of the plan are still being hashed out. But a city spokesperson said that it will include “public art on city or sister agency property,” including public schools and police stations.

The news got me thinking about what the city has in its public art collection that isn’t as public as, say, the Columbus statues, which had been in Grant Park on the city’s lakefront, Arrigo Park in Little Italy and at an intersection in South Chicago.

Get stories about big issues that affect people living and working in the state of Illinois delivered straight to your inbox.

Looking through this public art guide, I noticed a number of artworks placed in police stations throughout the city. Many had been commissioned and installed in the early 2000s during the administration of Mayor Richard M. Daley. Some were funded through a city program called Percent for Art, which requires that 1.33% of the budget for any construction or renovation project that affects at least half the square footage of a public building be reserved for site-specific art. Percent for Art is now administered by the Chicago Department of Cultural Affairs and Special Events, which is also a partner in the city’s new reassessment plan, and new works are selected and commissioned through open proposals.

As the Daley administration built and renovated libraries, fire and police stations, and other facilities, according to the Chicago Tribune, it also installed public art in those locations.

And while communities in Chicago and across the country are challenging the role of police, and in light of the city’s plan to reevaluate public art, I thought I’d catch up with a few of the artists whose work is on display at police stations to reflect on their projects and get their thoughts on how those pieces hold up today. 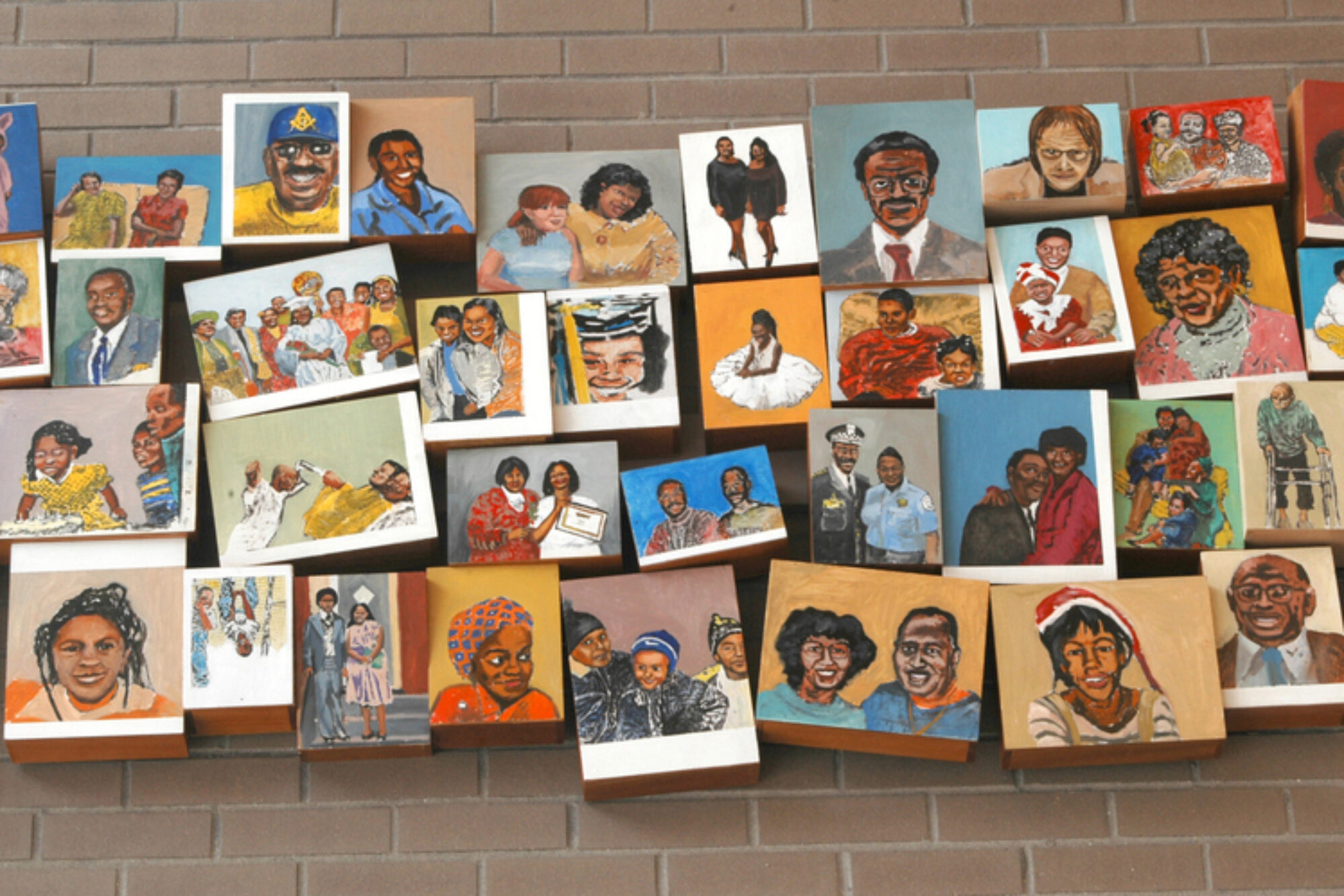 A section of John Bakker’s Making Contact at the 6th District police station. Courtesy of the artist

For his piece, Making Contact, Chicago artist John Bakker said he worked closely with neighborhood churches and community groups to solicit family photos from residents. He then turned each photograph into small paintings, hundreds of which now line the interior of the police station.

“For me, hand painting an image of an individual is a way of affirming the value of their humanity without regard to success or failure,” Bakker said, adding that part of his intention was to help democratize a form of art — portraiture — that was once a luxury only afforded to the wealthy.

He said he hoped residents would come into the police station to find their portraits, which would then spark conversations with officers from a place of personal history and community identity.

I asked him if he thinks it worked. “In some ways, paintings portraits is really dumb and painting portraits of hundreds of people is ridiculous. It takes an awful amount of time,” he said. “But in the current situation, I can’t think of anything more avant garde.”

When the new police station in the Austin neighborhood on the West Side opened in September 2005, it featured a sculpture of dozens of convex, circular mirrors suspended from the ceiling. You might recognize these mirrors as the ones that are sometimes mounted above shopping aisles or placed outside driveways to keep drivers from backing into things. 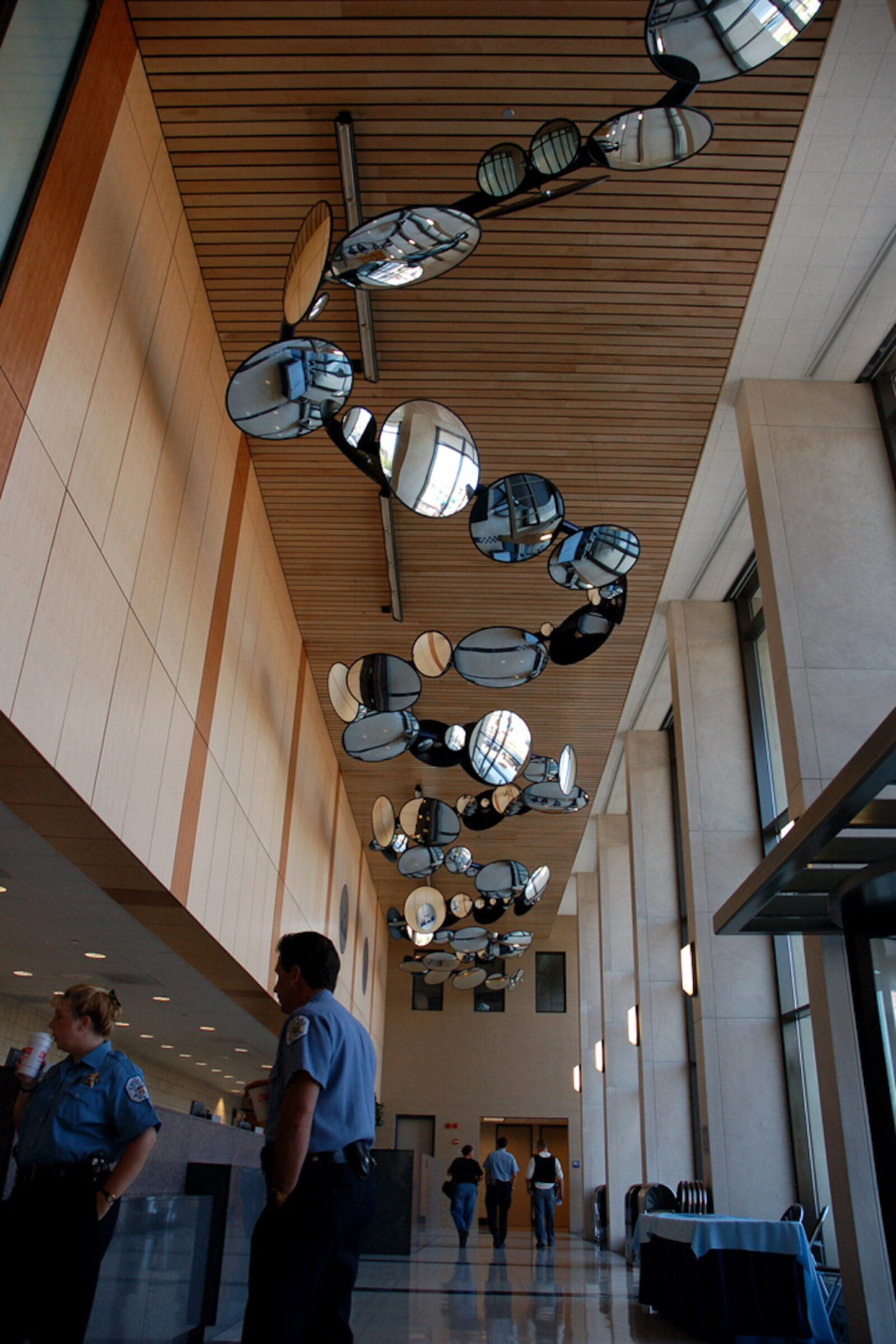 Ginzel and Jones’ Panopia at the 15th District police station. Courtesy of the artist

That concept of distorting perception was important, Ginzel said. Ginzel, who grew up in Chicago and now lives in New York, said he feels police officers should live in and be part of the community — something he doesn’t necessarily see in policing today.

Ginzel said that traditional monuments, such as the Columbus statues, can be problematic because they represent power from a specific point of view. The point of Panopia, he said, is to fracture any single point of view.

Reflecting on the piece now, Ginzel said: “I can imagine some people might come into the station and think that it’s a surveillance tool. On the other hand, it does allow you to see more of what would be considered behind the scenes. I’d like to think it’s functioning as a positive out there.”

For this artwork, Chicago sculptor Mike Baur created a new pedestal for a preexisting monument that commemorates the Haymarket affair of 1886. This rally held in support of workers’ rights and the eight-hour workday ended with the deaths of police officers and workers after someone threw a bomb and police opened fire.

The original 1889 statue, which depicts a police officer, has sparked controversy for decades; it’s been rebuilt and relocated at least three times, according to WBEZ’s Curious City. 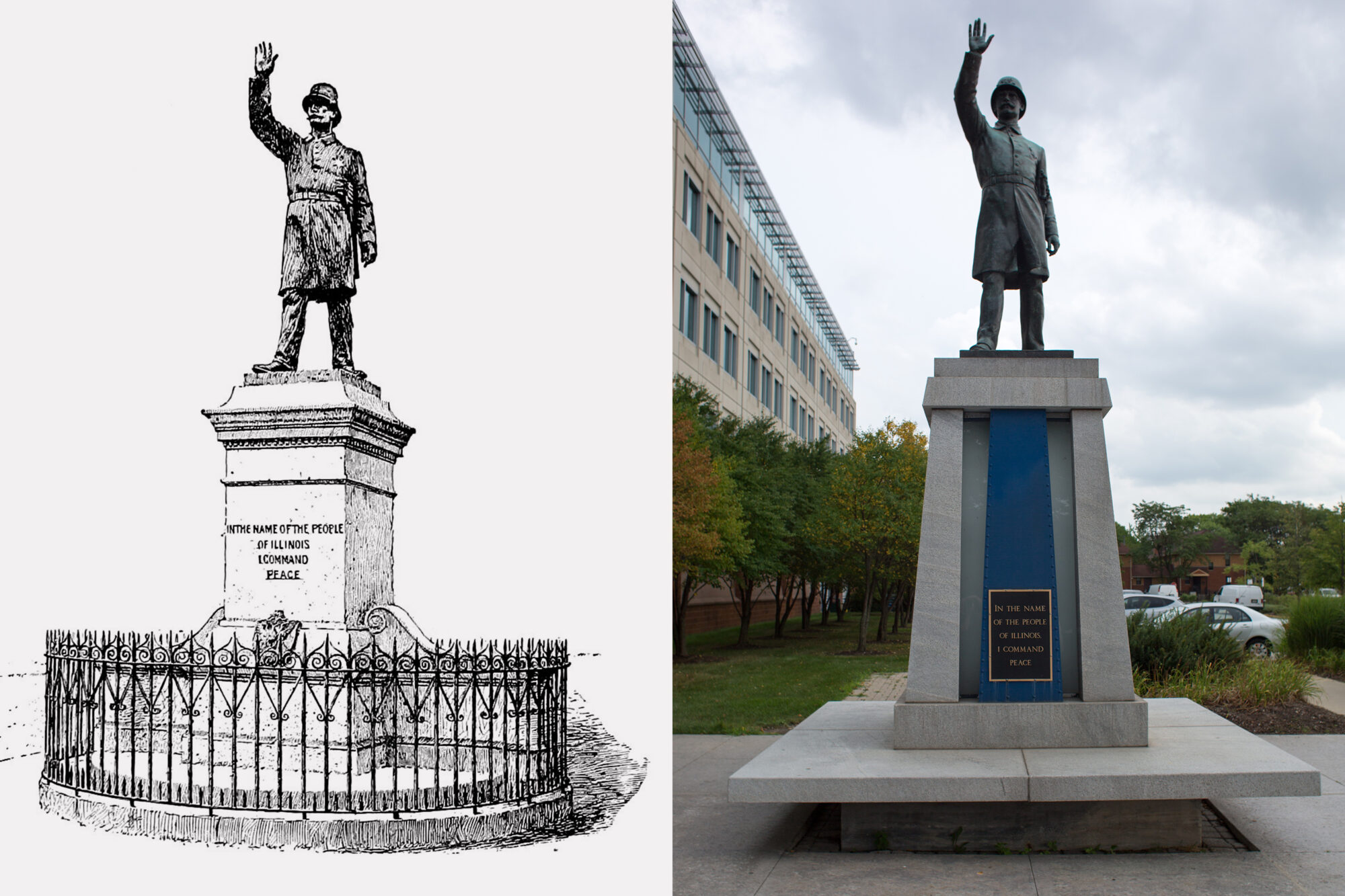 An artist’s 1897 rendering of the Haymarket Monument, left, and Mike Baur’s new pedestal in 2015. Wikimedia Commons

The monument and its new pedestal were installed in 2007 outside the police headquarters building, which opened in 2000. Knowing the monument’s history and controversy, Baur said his pedestal’s design acknowledges the role of citizens in policing. Though he said he thinks of the 1889 monument as one “to police officers, for police officers”— especially with its most recent placement in a location Baur said is more protected — his addition of the pyramid-shaped pedestal is meant to signify that “if police don’t have community support, then they’re worthless.”

One thing Baur said he’d do differently: Make the pedestal shorter. He said he’s watched people try to take photos and struggle to get the top sculpture in the frame. “They just see the pedestal,” he said.

By the end of 2020, the city plans to have recommendations from its assessment committee — shaped by public input — on which monuments, memorials and other public artworks should be addressed. Though the public art in police stations may seem trivial compared with Columbus, the root question is the same: What art does the public want to best reflect its values?