Join the 34,389 people who've taken action on Causes this week

The California senator is the daughter of two immigrants, her mother is from India and her father is from Jamaica.

On Wednesday, the third day of the virtual Democratic National Convention, Harris said she and former Vice President Joe Biden share "a vision of our nation as a beloved community—where all are welcome, no matter what we look like, where we come from, or who we love."

Though Americans may not "agree on every detail," they are "united by the fundamental belief that every human being is of infinite worth, deserving of compassion, dignity and respect."

The Trump campaign released a statement before Harris started speaking, calling her “a total phony.”

What do you think of the DNC convention?

Should Police Unions Be Reformed?

Congress has shifted its focus from the police reform debate for the moment, and some lawmakers are advocating for punting the issue until next year.

Still, the role of police unions in protecting law enforcement officers from punishment for misbehavior will be a significant aspect of future negotiations on the issue along with other issues like qualified immunity.

About half of America’s 800,000 police officers belong to a police union. Like all labor unions, police unions exist to protect the interests of all of their members to the greatest extent possible. Stronger protections for officers from termination are often negotiated by police unions in their collectively bargained contracts with local governments, which can protect bad actors and allow them to return to duty with minimal punishment.

For example, Derek Chauvin, the ex-Minneapolis police officer who knelt on George Floyd’s neck until he died, had 18 complaints filed against him but remained on the force and faced only minor discipline until he was terminated for his role in Floyd’s death.

Do you support or oppose reforming police unions?

The sharp widening of the deficit comes amid federal efforts to provide coronavirus relief through fiscal stimulus and reduced tax revenue while the economy gradually reopens from the lockdowns imposed to slow the pandemic.

The federal government spent a total of $626.5 billion in July 2020, a decrease from $979.7 billion in April and $1.104 trillion in June as coronavirus relief legislation was implemented. This USAFacts chart shows monthly federal spending dating back to November 2019: 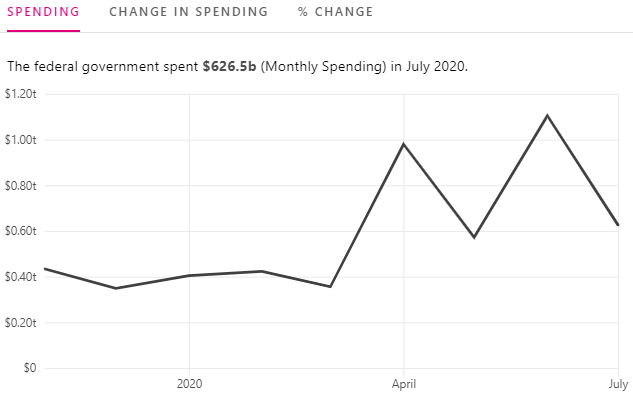 Check out more charts here, then join the conversation:

Are you worried about the budget deficit?

On this date in 1939, the National Bowling Association was founded in Detroit.

The TNBA was the first bowling association in the U.S. for African Americans.

Give Spotify a break and check your FM in honor of National Radio Day,