How We Analyzed Data on Nursing Home Outbreaks

Join the 45,204 people who've taken action on Causes this week

by Hannah Fresques and Sean Campbell

New Jersey’s long-term care population has been hard-hit by the pandemic. The novel coronavirus has killed nearly 16,000 people in the state so far, almost half of whom lived in long-term care facilities, and more than 5,400 of whom were nursing home residents. No other state has a higher number of known deaths from COVID-19 linked to nursing homes and assisted living facilities, based on officially released numbers from states.

Nursing homes played a difficult role during the pandemic’s early months. The facilities house a population particularly vulnerable to the disease, but at the same time, many states, including New Jersey and New York, relied on nursing homes to ease the burden on hospitals during the peak of the pandemic.

An investigation by ProPublica found that CareOne, one of the largest nursing home chains in New Jersey, was able to obtain the largest state license agreement for taking COVID-19-positive patients from local hospitals. After the company took the lead on a nursing home evacuation when cases were surging, CareOne became enmeshed in the state’s pandemic response, and it developed an outsized infection and death rate.

Even among hard-hit New Jersey nursing homes, CareOne homes stand out. According to ProPublica’s analysis, statewide, nursing home residents who have died of the disease account for 10% of the system’s total capacity. Within CareOne facilities, the rate is 17%. CareOne nursing homes also have an infection rate of 56% compared with 38% statewide.

Coronavirus deaths in CareOne facilities, as a share of certified beds, have been consistently higher than in other nursing homes in the state. 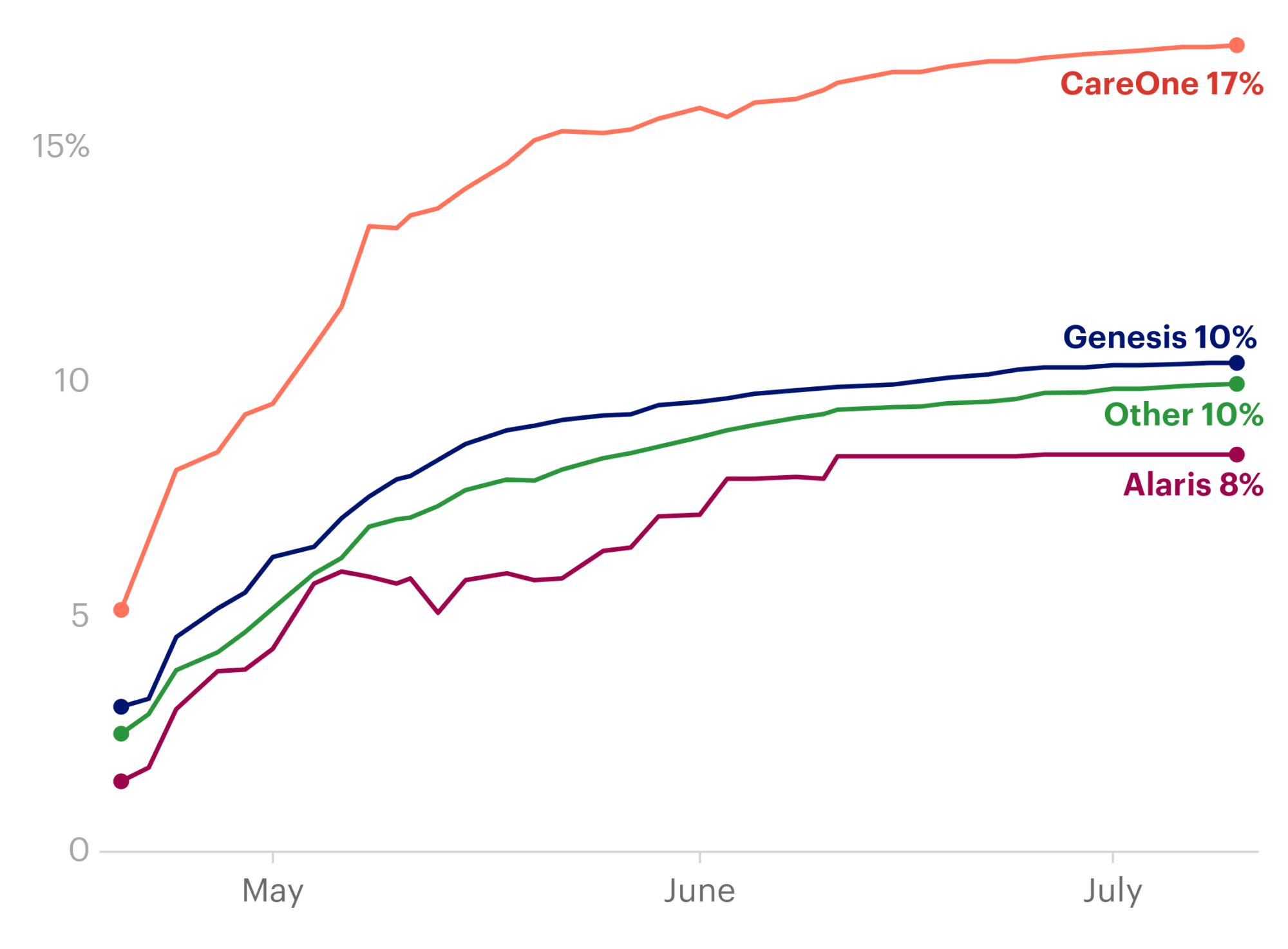 Our analysis relied on New Jersey COVID-19 outbreak reports and federal data on nursing homes compiled by the Centers for Medicare and Medicaid Services. The state began releasing facility-level data on April 20.

ProPublica’s analysis excludes assisted living facilities, which are not regulated by CMS. CareOne runs 31 facilities in New Jersey: 21 nursing homes, which report to CMS and were therefore included in ProPublica’s analysis, and 10 assisted living facilities. Facilities were matched manually between the two datasets using name and county. In all, ProPublica analyzed 363 nursing homes in the state.

Rates are as of July 10, after which point the state changed its reporting practices, making tracking cumulative deaths by facility impossible. Since July 13, the state’s COVID-19 dashboard reports the cumulative statewide number of long-term care facility infections and deaths, and facility-specific data only for those that have active outbreaks. According to the state, outbreaks are considered concluded 28 days after the onset of the last case. Once the facility-level data was changed to only include deaths linked to active outbreaks, the total number of resident deaths decreased from 6,604 to 5,811. By Aug. 12, facility-level data only captured 2,561 resident deaths linked to active outbreaks.

After the reporting change, once an outbreak is considered concluded, the facility is not included in reports, and therefore any subsequent deaths from that outbreak are not reported. Facilities may reappear in the reports if another outbreak is reported, but death counts will only include deaths from the current outbreak.

The disease spread much more slowly in the month since the reporting change; less than 2% of total resident cases and deaths have occured since July 10. While only a small portion of statewide long-term care deaths to date are excluded from our analysis, the lack of facility-level transparency will make tracking the full impact of future outbreaks impossible for the public.

The death and infection rates are calculated as a percentage of the number of beds available at each facility. Some facilities have higher rates of turnover, particularly those that provide short-term care for patients recovering from hospitalization.

In an email, CareOne spokesman Eric Bloom said that the company reports its data to the state, but the data that is made public is “imperfect” because local health departments interpret the reporting guidelines differently.

Bloom also said that the high rate of CareOne deaths found in ProPublica’s analysis is misleading because the company treated a large number of COVID-19 patients. However, according to the New Jersey Department of Health, patients who are already COVID-19-positive when admitted to a facility are not included in that facility’s case and death counts. (One exception would be if a patient was returning to the facility where they acquired the infection after a hospital stay.)

The chain also contends that ProPublica’s method for calculating the infection and death rates is inaccurate because using available bed count as a denominator does not take into account the number of patients treated at a facility. The most recent publicly available data for admissions across all nursing facilities is from 2017, and the three largest chains in New Jersey, including CareOne, declined to share current admission numbers with ProPublica. Using the number of licensed beds to control for population size is common in analyses of nursing homes, including in a report commissioned by New Jersey and produced by expert consulting group Manatt Health on the impacts of COVID-19 in long-term care facilities. Additionally, the number of short-term patients flowing into nursing homes during the pandemic almost certainly declined from previous years: elective surgeries, a major source of short-term stays in nursing homes, were suspended in New Jersey for most of April and May, when the pandemic was at its peak.