Do you support the air travel industry getting loans to keep workers on the payroll?

The airline industry has been hit hard by the coronavirus (COVID-19) pandemic, as would-be travelers have generally stayed home in light of state & local guidelines about social distancing guidelines related to non-essential travel.

Transportation Security Administration (TSA) data from the first week of April shows that an average of 119,000 passengers were screened each day by TSA, whereas last year that figure was an average of 2.3 million passengers. This chart from USAFacts compares daily TSA screenings in 2019 to those in 2020, and illustrates the precipitous decline: 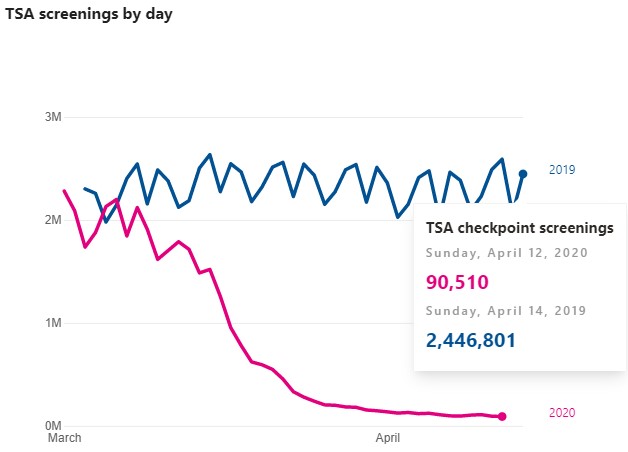 The federal government imposed the first restrictions on air travel on January 31st, when the Trump administration banned travel from China before it later broadened the ban to include Iran and much of Europe. The State Dept. issued a global health advisory on March 19th that warned Americans to avoid all international travel. These announcements, coupled with domestic social distancing guidelines have prompted airlines to cancel a large percentage of their flights.

The Coronavirus Aid, Relief, and Economic Security (CARES) Act was signed into law by President Donald Trump on March 27th after unanimously passing Congress, and the package includes $46 billion in direct lending to support airlines, cargo air carriers, and related industries. To receive the lending, companies must:

The Treasury Dept. reached agreements with numerous air carriers on terms for providing payroll support through the lending program, which will include a combination of grants, interest-bearing loans, and stock options (known as warrants) so that taxpayers can see a return on their investment over time. The following agreements with major airlines have been announced and were reported by the National Law Review: