Where Do Americans Get Their Health Insurance?

How do you feel about your health insurance?

The debate over the government’s role in providing health insurance coverage is playing a pivotal role in the 2020 elections, as Democrats grapple with whether to make a single-payer, “Medicare for All” system a key plank in their platform. It raises an important question: Where do Americans get their health insurance? 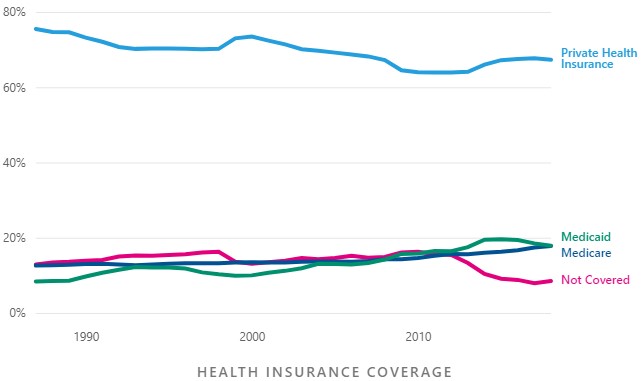 After fluctuating between 12.6% and 13.6% from 1987 to 2003, Medicare enrollment has grown steadily as the U.S. population ages. Enrollment in Medicaid ― which provides health insurance to low-income households and people with disabilities ― tends to be higher when the U.S. economy is in a recession or experiencing sluggish growth, which explains why it has declined from a high of 19.6% in 2015. Some of that increase was due to the enactment of the Affordable Care Act in 2010, which expanded Medicaid in the ensuing years. The uninsured rate was between 12.9% and 16.3% from 1987 to 2010, but has declined steadily since the became law and took effect in 2014.

Those changes are evident when comparing the changes in each type of health insurance insurance over time, as the following charts from USAFacts show. The first compares health insurance coverage rates in 1999 to 2018, while the second compares 2013 to 2018: 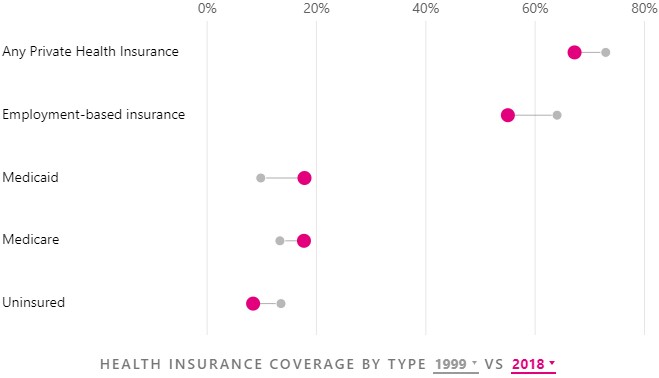 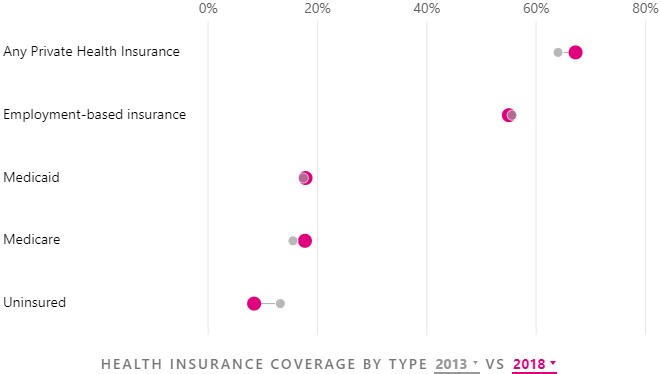 What does it mean for “Medicare for All”?

As with any policy, it’s unclear what the future holds for single-payer healthcare such as Medicare for All. However, the prevalence of private health insurance, its relative popularity among voters, and a lack of understanding about the details of Medicare for All proposals, such as the one offered by Democratic presidential contender Sen. Bernie Sanders (I-VT), may indicate challenges in enacting such a program.