The DC: Thousands of Iranians demonstrate over downed plane, and... ⚒ Do you support easing environmental rules on construction projects?

Join the 66,858 people who've taken action on Causes this week

Thousands of Iranian protesters are taking to the streets after the government admitted it accidentally shot down a Ukrainian jetliner, killing all 176 people on board.

Iranian riot police and members of the Islamic Revolutionary Guard Corps are cracking down on the protesters, who are demanding the resignation of top government officials.

President Donald Trump tweeted Sunday in support of the demonstrations.

"To the leaders of Iran - DO NOT KILL YOUR PROTESTERS. Thousands have already been killed or imprisoned by you, and the World is watching. More importantly, the USA is watching. Turn your internet back on and let reporters roam free! Stop the killing of your great Iranian people!"

Do you support the Iran protests?

President Trump revived the political battle between industrialists and environmentalists Thursday, introducing a proposal to streamline an "outrageously slow and burdensome federal approval process" that can delay major infrastructure projects for years.

The proposal would put new limits on implementation of the 50-year-old National Environmental Policy Act, or NEPA, which requires federal agencies to consider the environmental effects of proposed projects before they are approved.

NEPA also gives communities the ability to comment on what gets built in their backyards.

"From day one, my administration has made fixing this regulatory nightmare a top priority," Trump said during a ceremony at the White House. "And we want to build new roads, bridges, tunnels, highways, bigger, better, faster, and we want to build them at less cost."

Gene Karpinski, president of the League of Conservation Voters, told USA Today that “the implications for access to clean air and clean water and for public input, especially among the low-income communities and communities of color most impacted by climate change and toxic pollution, could be dire.”

Do you support easing environmental rules on construction projects?

The significance of manufacturing in the U.S. economy has declined in recent decades.

In 1998, there were 18.1 million manufacturing jobs representing 11% of the workforce, but in 2018 that total had fallen to 13.5 million jobs, which is 6.7% of the labor force. This chart from USAFacts shows how the manufacturing labor force has changed in that period on the national level and state-by-state: 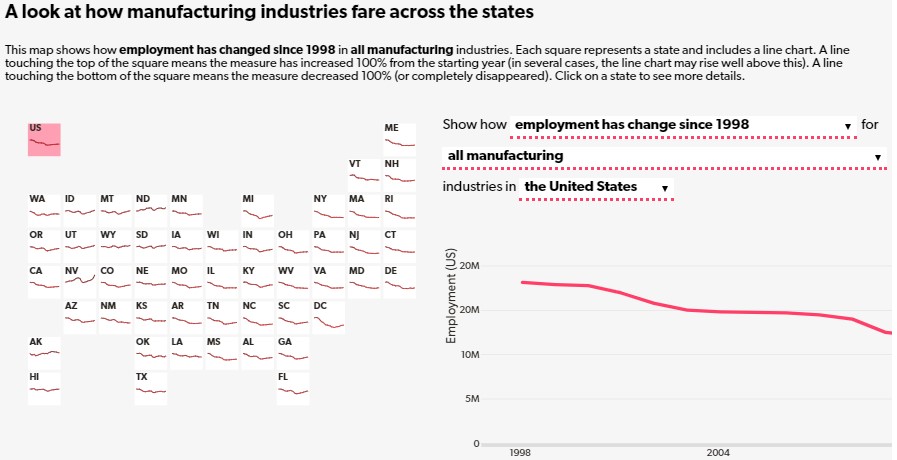 For many more charts explaining the role of manufacturing in America's economy, click here. Then tell your reps:

How do you feel about the decline in U.S. manufacturing?

Here's how you're answering Should the Gray Wolf be Taken Off the Endangered Species List?

On this date in 1966, Robert C. Weaver became the first black Cabinet member.

Weaver was appointed Secretary of Housing and Urban Development by President Lyndon Johnson.