The DC: The U.S.-Mexico-Canada Agreement, and... 🎖️ Do you support revoking medals awarded for Wounded Knee?

Join the 29,434 people who've taken action on Causes this week

Deals not dealy enough? Maybe it's time to approve the USMCA.

Nearly one year after the U.S.-Mexico-Canada Agreement (USMCA) was agreed to (in principle) by the leaders of said nations, House Speaker Nancy Pelosi (D-CA) signaled that she may be willing to allow the lower-chamber to consider the NAFTA replacement.

“House Democrats have insisted that hard-working Americans need more from the USMCA than just the same broken NAFTA with better language but no real enforcement," Pelosi said in a statement last week.

"We are within range of a substantially improved agreement for America’s workers. Now, we need to see our progress in writing from the Trade Representative for final review."

President Donald Trump warned that if Congress doesn’t act soon, America’s trading partners may be tempted to walk away from the deal, and questioned whether Pelosi would be able to pass it in the House:

Click here to consider the trade deal yourself, then tell your reps:

Should Congress approve the USMCA?

Data from the U.S. Census Bureau’s 2018 American Community Survey shows that the number of Americans identifying as at least partially Native American has increased from 1.6 million in 2000 to 5.7 million Americans in 2018.

This map from USAFacts shows the distribution of Native Americans as a percentage of a state’s population: 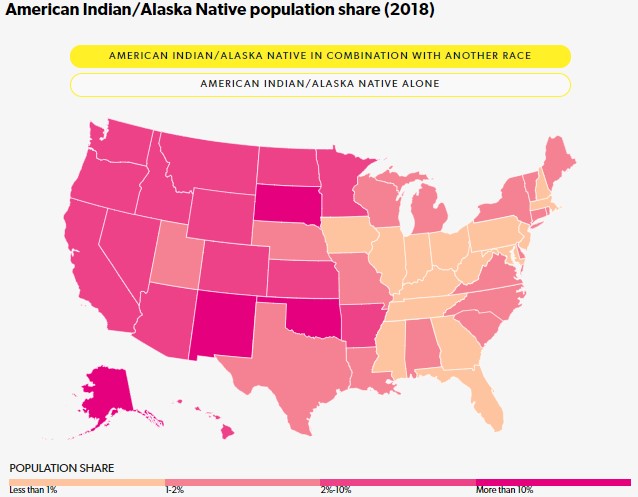 Compared to the overall population, Native Americans are younger, lag behind in economic and academic metrics, and serve in the Armed Forces at nearly the same rate as non-natives:

Take a look at all USAFacts' charts here, then tell your reps:

Should the government do more to remedy disparities facing Native Americans?

Democracy in the People's Republic of China

President Trump has signed into law the Hong Kong Human Rights & Democracy Act. He also OK'd a bill to block sales of tear gas & other crowd control items to the Hong Kong Police.

"I signed these bills out of respect for President Xi, China, and the people of Hong Kong," Trump said in a statement. "They are being enacted in the hope that Leaders and Representatives of China and Hong Kong will be able to amicably settle their differences leading to long term peace and prosperity for all."

Do you support U.S. efforts to protect human rights in Hong Kong?

Presidential hopeful Elizabeth Warren (D-MA) has announced legislation that would revoke the 20 Medals of Honor awarded to soldiers who participated in the 1890 Wounded Knee massacre.

In 1890, 490 U.S. soldiers – armed with four rapid-fire, wheeled artillery guns – were attempting to disarm a camp of about 370 Lakota Sioux Native Americans in Wounded Knee Creek “when a shot rang out and chaotic firing ensued,” explained the Rapid City Journal. This resulted in the death of an estimated 250 or more Native Americans, including many women and children.

Historical records indicate that the Army awarded 20 medals of honor to participants of the massacre, from privates to musicians to lieutenants.

The Remove the Stain Act would rescind these medals.

“The horrifying acts of violence against hundreds of Lakota men, women, and children at Wounded Knee should be condemned, not celebrated with Medals of Honor,” Warren said in a statement.

Do you support rescinding medals for Wounded Knee?

Your Gov at a Glance 👀

The House of Representatives: Out

Here's how you're answering Should Purchases of Untraceable, Homemade 'Ghost Guns' be Subject to Federal Background Checks?

As you're Adding to Cart and Removing from Savings today, maybe thank (or curse) the Philadelphia Saving Fund Society, the first U.S. savings bank, which was founded on this date in 1816.

Have a bump-free Safety Razor Day,