Join the 51,675 people who've taken action on Causes this week

This content was originally researched and published by #NoRA. Read more about this issue, take action above, and contact your lawmakers to continue moving the needle.

The National Rifle Association (NRA) is a trade organization representing gun manufacturers in the United States. Although it masquerades as a grassroots organization for gun enthusiasts, it’s total opposition to even the most modest of gun safety restrictions make it a well-funded political apparatus for gun extremists. According to the National Shooting Sport Foundation (another gun trade organization) 2017 annual report, the gun industry is worth over $20 Billion USD annually. While these figures clearly fail to take into account the terrible economic toll that firearm deaths have on America, they demonstrate the tremendous financial might the industry wields.

For the twenty-year period between 1998 and 2017, gun manufacturers and pro-gun activist groups including the NRA spent more than $156,000,000 on lobbying, or more than 8 times the money spent by gun law reform advocacy groups.

Take Action Above to Contact Your Lawmakers and Let Them Know How You Feel About Gun Violence Prevention.

With this money, the NRA has purchased untold influence. Following the Sandy Hook Gun Massacre, two basic gun reform measures were introduced into the senate. Both were defeated. One was an assault weapons ban which would have prohibited the sale of the AR-15 assault weapon favored by so many mass shooters. The other, an amendment which would have required universal background checks on most private sales of guns, failed to cross the filibuster threshold of sixty votes.

In the election cycle immediately prior to these votes, the NRA spent nearly ten times more on the Republican Party than it did on the Democratic Party. This total only includes direct donations by the NRA and its employees. It does not include PAC spending, issue advertising, donations by its members, or other gun industry groups.

And so, in the wake of a tragedy we thought we could not bear, we decided to bear it over and over again. Since Sandy Hook, there have been more than 400 people shot in more than 200 school shootings, which now happen at a rate of more than one per week. And if we look at the bigger picture, gun violence deaths have been increasing every year since 2014, and inclusive of suicide by gun now likely exceed 35,000 deaths annually.

When one looks at the individual recipients of the gun lobby’s money, and their actions (or inactions) on gun reform legislation, this impact becomes even clearer. In the 2016 election cycle, of the top 15 recipients of direct contributions from the NRA and its employees, all of them were Republicans. When Politico did further analysis and looked at the elected officials who had received direct contributions from the NRA and employees (again, ignoring NRA members, SuperPACs, and issue spending), all twenty-seven were Republican.

When NRA PAC spending is taken into account, the numbers are staggering. In the 2016 election, it spent more than $50 million dollars on just six races - winning five of them: 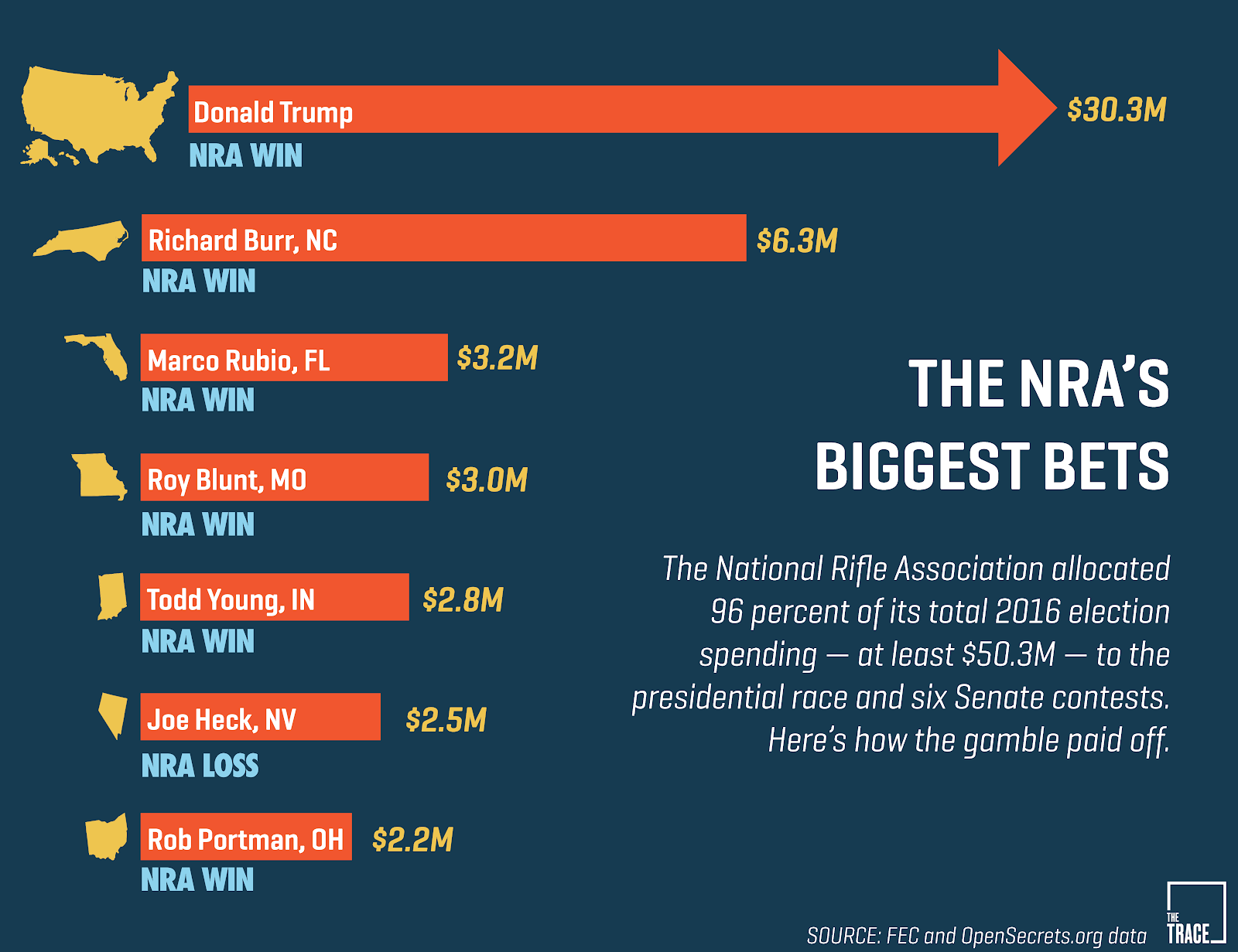 This spending pays dividends for the NRA already. One of Donald Trump’s first actions as President was to sign a bill that ended an Obama executive order on gun reform. Richard Burr’s opponent in North Carolina was a well-funded Democrat who, as a North Carolina State Representative, tried to block concealed-carry legislation. Concealed-carry reciprocity is a legislative priority for the NRA this year, and a bill has already passed the House.

To worsen matters, it is alleged that the NRA illegally circumvented spending disclosure laws,

failing to disclose more than $50 Million in political spending between 2008 and 2014. Without accurate disclosure, it is impossible to measure what additional influence the NRA wielded over elected officials during that time. What is clear, however, is that period surrounding the Sandy Hook Gun Massacre, Congress flatly failed in the very limited actions it tried to take to reduce gun violence, with Republicans virtually in lock-step in opposition to even modest reforms.

It is important to remember that the NRA is a trade organization masquerading as a hobbyist organization. It represents the interests of gun manufacturers, and it uses mass shootings and the spurs toward gun safety legislation to sell more guns. The NRA is essentially the marketing agency for small arms dealers.There is a direct correlation between mass shootings, NRA marketing to mobilize its more than five-million members against new legislation, and FBI NICS background checks. As the chart below demonstrates, background checks rose very significantly year-on-year for months after Sandy Hook, Virginia Tech, and the election of President Obama. In 2017 these checks decreased for the first time since 2014, following Trump’s inauguration. 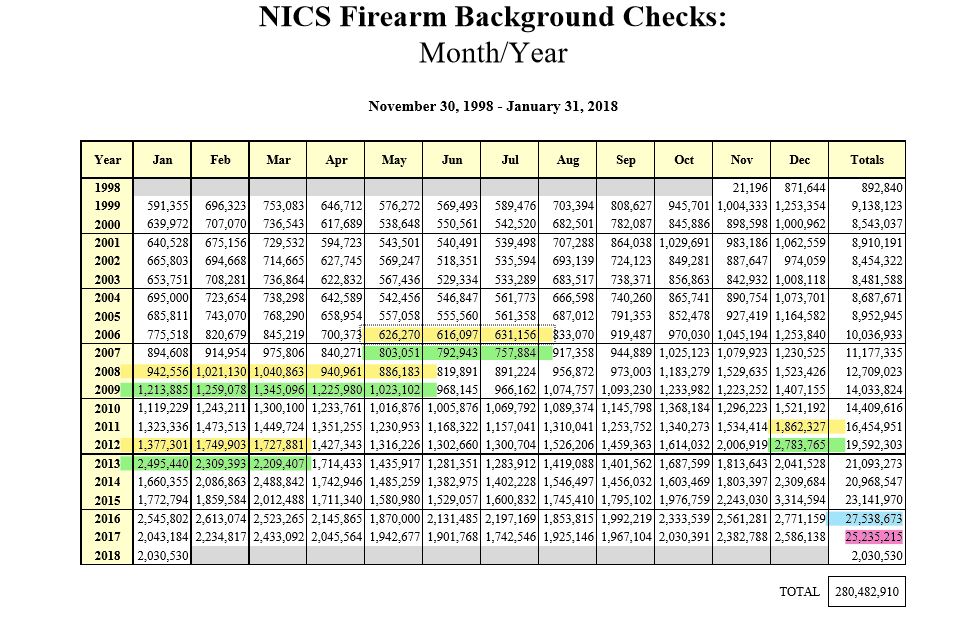 All of this leads us to today. Following another school shooting, we are witnessing the legislative and executive branches of our government once again tow the NRA line. Speaker Ryan warned against “knee-jerk reactions” to this shooting, a statement he issued following mass shootings in each of the past several years. He warns that it is time to “gather the facts,” which is the same language the NRA used in its refusal to issue a statement following Parkman school shooting.

Meanwhile, the NRA continues to spend on politicians to advance its agenda. It spent more than $5,000,000 on lobbying in 2017, a non-election year, as more than 33,000 Americans die annually from gunshots.

Nikolas Cruz honed his shooting skills on the Marjory Stoneman Douglas High School shooting team, which the NRA funded to the tune of nearly $11,000 in 2016.. He reportedly could not stop talking about guns. He had a violent history known to law enforcement. And he was still able to kill 17 people in six minutes with an assault weapon the NRA made sure he could purchase legally.

And more than 90 Americans are dying every day in shootings across the country.