Export-Import Bank Gets Temporary Reprieve as Reauthorization Debate Drags On

Should the Export-Import Bank be reauthorized?

The recently enacted bill that extends government funding through November 21st also prevents a lapse in the authorization of the Export-Import Bank, which otherwise would’ve been forced to stop its operations as of October 1st.

Congress has struggled thus far to reach a bipartisan agreement to reauthorize the controversial financial entity, which was last authorized in 2014 and lacked a sufficient quorum to approve deals exceeding $10 million from 2016 until a trio of confirmations by the Senate in May 2019:

What does the Export-Import Bank do?

The Export-Import Bank (or Ex-Im Bank) was established in 1944 by President Franklin D. Roosevelt to serve as the official export credit agency of the U.S. and help American businesses export their goods and services. Here’s how the Ex-Im Bank describes its role:

“When private sector lenders are unable or unwilling to provide financing, EXIM fills in the gap for American businesses by equipping them with the financing tools necessary to compete for global sales.”

In other words, it uses insurance policies, direct lending, and guarantees to facilitate transactions between foreign buyers and American companies to occur that otherwise wouldn’t happen because of credit or country risks.

The Ex-Im Bank is self-funded through user fees it collects, but ultimately it’s backed by the full faith and credit of the U.S. government, which means that taxpayers are liable for losses incurred. Legally, it can only authorize transactions with a “reasonable assurance of repayment” and as a result it reported a default rate of only 0.5% in December 2018.

It’s governed by a five member board, which requires a quorum of at least four directors to consider medium- and long-term transactions exceeding $10 million. The Ex-Im Bank lacked a quorum from 2016 to 2019, which led to the accumulation of a $40 billion backlog of prospective transactions and $20 billion in lost export opportunities. The Senate confirmed three nominees to the Ex-Im Bank board on broadly bipartisan votes in May 2019 to establish a quorum and get the bank operating again.

Why is the Export-Import Bank Controversial?

Critics of the Ex-Im Bank, the ranks of whom include both conservatives and progressives, argue that it’s a form of “corporate welfare” because the companies benefiting the most from its activities are among the largest U.S. corporations. For example, about 40% of the bank’s authorizations went to Boeing alone in 2014, as opposed to 25% for small businesses as a group.

Detractors also say the bank is picking economic winners-and-losers with taxpayer dollars ― and sometimes those bets don’t pay off. According to data from USAFacts, the Ex-Im Bank last operated at a net loss in 2010 when it was $262 million in the red. And it’s had worse stretches in recent decades, such as the three years during the 1980s in which it incurred an annual deficit of more than $1 billion.

Supporters of the Ex-Im Bank argue that it helps U.S. companies and workers compete against heavily-subsidized foreign rivals in the global economy ― supporting more than 1.7 million American jobs over the last decade while operating at a default rate of less than 1%. It also has consistently turned a profit in the course of its business, sending an average annual profit of $293 million back to the U.S. Treasury between 2000 and 2015 per USAFacts. 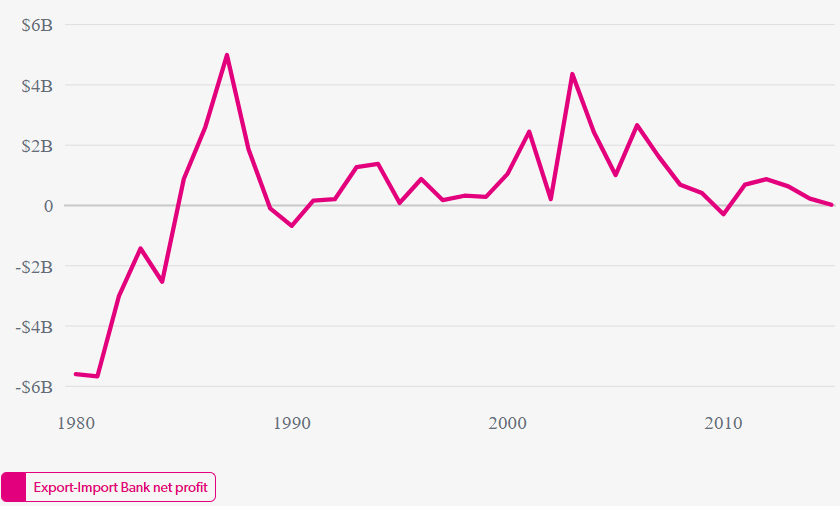