The DC: Whistleblower complaint against Trump, and... 🙏 Why should all of America thank you?

Vote to see how others feel about this issue

There they are—the heart of the body politic! The Countable Community! The captains of this ship of state! The thorn in McConnell and Pelosi’s side!

You, dear readers, are a model of how democracy should work. You’re educated. You’re engaged. You’re passionate about politics.

You let Congress know you’re watching their every vote.

I’m not one for hyperbole (ask my exes or Countable’s marketing team), but you make me want to use exclamation points. I feel like a proud Founding Father cradling his newborn republic.

Alas, you don’t get enough credit. Rather, you haven’t gotten enough credit. Which is why we’ve decided to share how you’re changing America. Each Friday, we’re going to devote some time to summarizing what you’ve accomplished, the votes you’ve cast, the comments you’ve left, the reps you’ve made cry/file lawsuits.

We also want to highlight some of our power users and those amassing their power. If you’d like to be featured, and/or are up for talking to me about the issues that matter most to you, reach out in the comments or privately at joshh [at] countable.us.

When people speak of model citizens, they’re speaking of you. Thanks for inspiring !s

President Donald Trump’s alleged “promise” to a foreign leader prompted an American intelligence official to file a formal whistleblower complaint with the inspector general of the intelligence community.

The Washington Post, which first broke the story, reported that “Intelligence Community Inspector General Michael Atkinson determined that the complaint was credible and troubling enough to be considered a matter of ‘urgent concern,’ a legal threshold that requires notification of congressional oversight committees.”

The Office of the Director of National Intelligence (ODNI), however, informed Rep. Adam Schiff (D-CA), chairman of the Intelligence Committee, that the ODNI will not forward the whistleblower’s complaint to the committee, even though it’s required by law.

Schiff said someone "is trying to manipulate the system to keep information about an urgent matter from the Congress. ... There certainly are a lot of indications that it was someone at a higher pay grade than the director of national intelligence.”

"Another Fake News story out there - It never ends! Virtually anytime I speak on the phone to a foreign leader, I understand that there may be many people listening from various U.S. agencies, not to mention those from the other country itself. No problem!"

Should the intelligence chief share the Trump whistleblower complaint?

Nearly 50,000 United Auto Workers on strike against General Motors entered their fifth day on Friday as negotiations over wages, healthcare benefits, and job security look likely to continue through the weekend.

The strike prompted the shutdown of 33 manufacturing plants and 22 distribution warehouses as of Thursday, and is set to cost GM roughly $250 million per day.

The UAW’s demands include higher wages, expanded healthcare coverage and profit sharing, job security amid increased auto production in Mexico, and a defined path to seniority for temporary workers. The labor union has indicated that it will use an eventual agreement with GM as leverage in its upcoming negotiations with Ford and Fiat Chrysler.

As this chart from USAFacts shows, the number of labor stoppages (including strikes by unions and and lockouts by management) involving more than 1,000 workers has declined in recent decades. 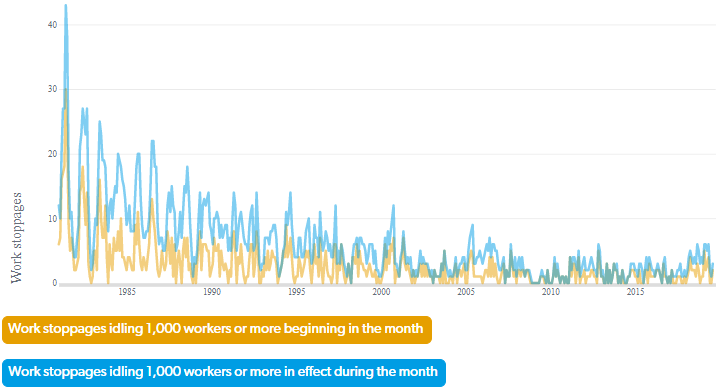 Read more about this story, and the decline in union membership, then tell your reps:

Do you support strikes by labor unions?

A federal court has temporarily blocked the enforcement of South Dakota's "Riot Boosting Act," which would allow the state to prosecute pipeline demonstrators and their funders with up to 25 years in prison.

“The state has a substantial government interest in criminalizing participation in a riot with acts of force or violence,” Judge Lawrence Piersol wrote. But the laws “go far beyond that appropriate interest and … do impinge upon protected speech and other expressive activity as well as the right of association.”

South Dakota Gov. Kristi Noem (R) and Attorney General Jason Ravnsborg, who were named in the lawsuit, have declined to comment on the ruling since the litigation is ongoing.

Do you support laws to discourage oil protests?

Your Gov at a Glance 👀

The House of Representatives: In

Here's how you're answering Should Forced Arbitration Agreements be Invalidated?

Congress passed a resolution authorizing National POW/MIA Recognition Day in 1979 after the families of more than 2,500 Vietnam War POWs and MIAs pushed for accountability.

You are not forgotten,